What is proton therapy

Proton therapy is an advanced radiation treatment that precisely targets tumors, with the goal of minimizing radiation to healthy tissue and improving the lives of patients while they’re fighting cancer and after. Proton therapy deposits the greatest amount of radiation right into the tumor and then stops, allowing patients to receive high doses to the tumor, with minimal dose to nearby healthy tissue. This more targeted form of radiation is especially useful for childhood cancers, where the impact of excess, harmful radiation can cause long-term damage. Additionally, protons are an effective treatment against many solid tumors including cancers of the brain, central nervous system, gastrointestinal tract, head and neck, left breast, lung, and prostate, as well as sarcomas.

Research shows proton therapy can minimize short- and long-term side effects, reduce the occurrence of secondary tumors, and improve patients’ quality of life. When external beam radiation is called for, proton therapy can be an effective option for treating many solid tumors.

For many patients, innovative pencil beam scanning (PBS) is a great option. PBS "paints" the entire tumor with multiple very thin, very precise beams of protons that are accurate within millimeters, and can further reduce the amount of radiation to healthy tissue.

A goal of sparing healthy tissue to help speed recovery

Proton therapy is a powerful treatment for cancer and a highly effective alternative to standard X-ray radiation therapy. Due to improved dose distribution with proton therapy, doctors can better conform radiation to the tumor site, which means less healthy tissue is exposed to radiation, and which in turn is expected to result in fewer short- and long-term side effects. 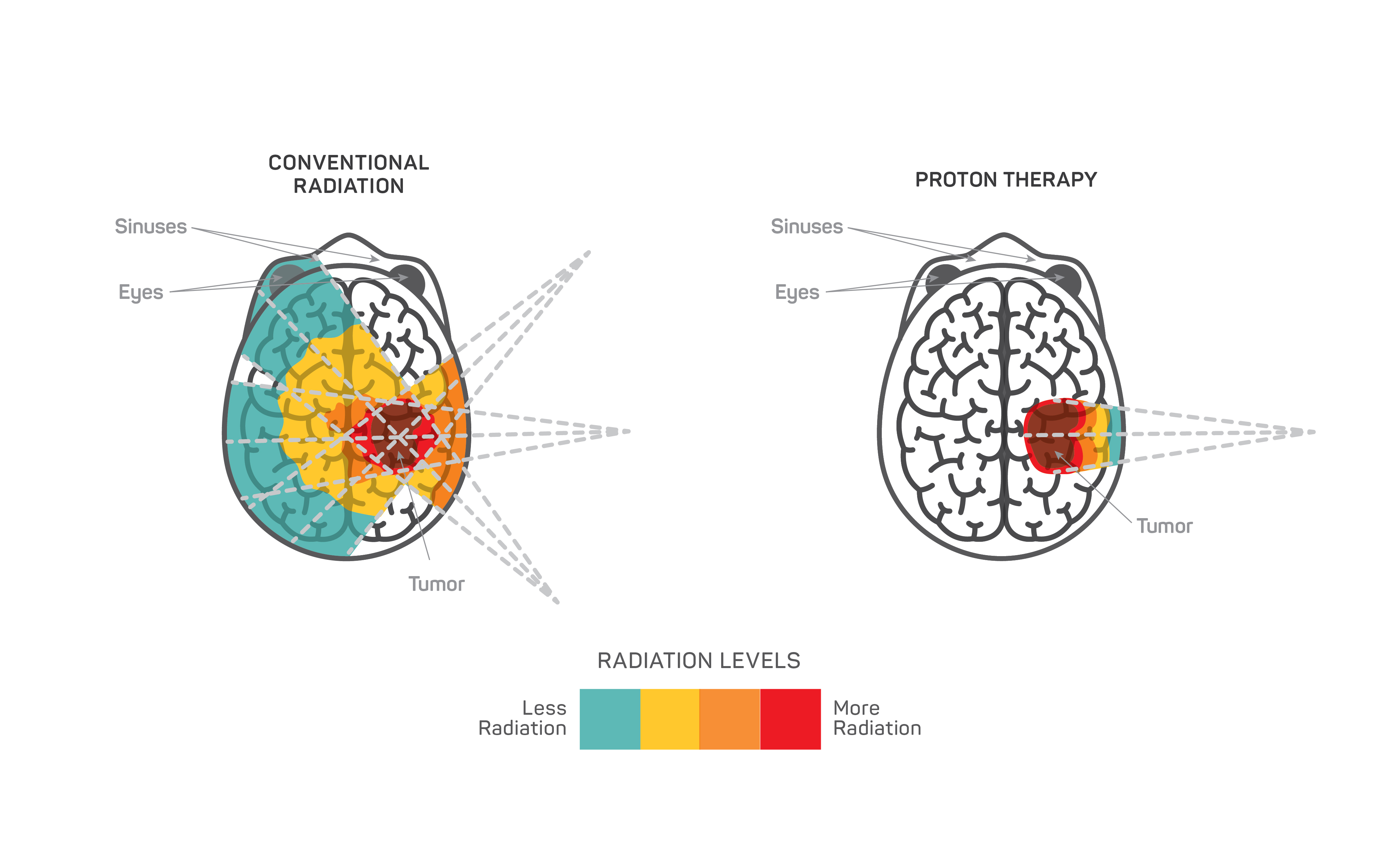 Since proton therapy is targeted, it can be particularly effective in treating children, who are more sensitive to the effects of radiation. The precision of protons means children have a reduced chance of radiation side effects such as growth and developmental problems, as well as secondary tumors later in life. The center has radiation oncologists who specializes in proton therapy treatment for children.

Treatments are safe, noninvasive, and painless for most patients. Treatments do not require an overnight stay in the hospital. Treatments are usually given five days a week, for a period of one to nine weeks. The total number of treatments needed depends on the location and size of the tumor. The actual treatment time is about one minute but total daily treatment sessions typically range from 15 to 60 minutes, due to the time spent positioning the patient for this precise treatment. Patients come to the center every day for a short period of time, but can then go about their usual routine.

Researched and perfected for more than 60 years

As of 2018, over 170,000 people worldwide have received proton therapy at centers in Europe, Asia and the United States. It was first used to treat patients in 1955 in a research setting, but its use was limited because imaging techniques at the time could not accurately pinpoint tumors. The FDA approved proton therapy in 1988, following advances in imaging technology, such as CT, MRI and PET scans. The first hospital-based treatment center opened in Loma Linda, California in 1990. Fred Hutchinson Cancer Center - Proton Therapy opened in 2013.

If you have a solid tumor near a vital organ, or a recurrent tumor, you are a prime candidate for proton therapy.

1895
German physicist W.C. Roentgen discovers X-rays, making detection of tumors in the body much easier and non-invasive. Roentgen later wins the Nobel Prize in Physics for this discovery.

1937
The first clinical use of X-ray radiation therapy is carried out for the treatment of a patient with leukemia at the University of California at Berkeley. Congress passes the National Cancer Institute Act that authorizes annual funding for cancer research in the United States.

1946
American physicist Robert Wilson publishes a study that suggests protons could be used to treat cancer because they are capable of delivering an increased dose of radiation to a tumor while simultaneously decreasing radiation exposure to surrounding healthy tissue.

1948
The first proton therapy experiments are conducted at the University of California at Berkeley. Tumors are effectively removed from the chest and lungs of animals.

1954
The University of California at Berkeley treats the first human patient with protons. Patients are treated with protons at other research institutions, including Harvard University in Boston.

1988
The FDA approves proton therapy as a cancer treatment option.

2013
On March 8, 2013, SCCA Proton Therapy Center (now Fred Hutchinson Cancer Center - Proton Therapy) opens in Seattle. It’s the first proton center in the Northwest and the only one within a 1000-mile radius.

Learn more about the evolution of proton therapy from the early days of standard radiation in medicine through the opening of Fred Hutchinson Cancer Center – Proton Therapy.