For SCCA patient Cade Marshall, providing the steel for a new clinic building is more than just a job

As the owner of a steel fabrication company, Cade Marshall gets dozens of requests for quotes every day. When he spotted one from GLY, the contractor for Seattle Cancer Care Alliance’s new clinic building, he called the contractor with a simple message:

“I owe everything to SCCA,” he told them. “What do I need to do to make this happen?” 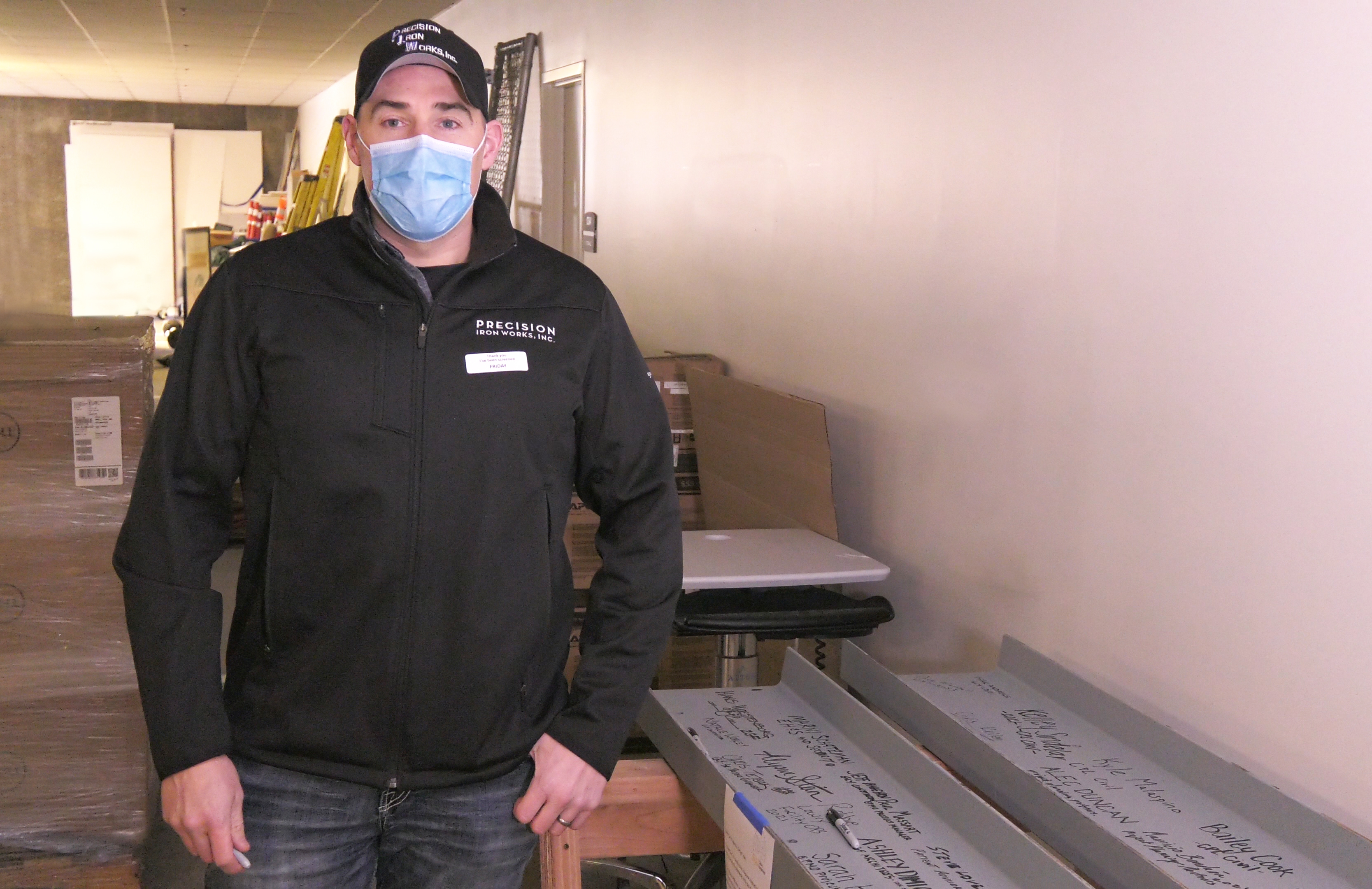 Cade Marshall signed the steel beam that will be the final one placed atop the framework of SCCA's new clinic building.

Five years ago when Marshall finished treatment at SCCA for Ewing sarcoma, a rare bone cancer that more typically affects children, he never imagined that his experience with SCCA would come full circle.

But after a competitive bidding process, GLY awarded the contract to Marshall’s company, Precision Ironworks, to supply all the prefabricated structural steel that has since been bolted together on the South Lake Union job site. The steel forms the framework for a new six-story building with 150,000 square feet for highly specialized patient care and support programs.

Marshall thinks it’s karma. “It feels like it was meant to be that we were able to be part of a building that will be able to help many, many people like me,” he says.

Marshall bought Precision Ironworks in 2019, four years after he was diagnosed at age 35 with cancer. He had been experiencing numbness in his right leg, so his primary care doctor first prescribed steroids then physical therapy, turning to imaging when Marshall didn’t improve. When the scan results came back, Marshall’s doctor told him to head straight to Harborview Medical Center. “They were considering emergency surgery,” he says. “I had a tumor coming out of my L2 vertebrae, pushing against my spine. They were surprised I could walk in there.”

But rather than send Marshall directly to the operating room, he was dispatched to UW Medicine’s Dr. Carlos Bellabarba for a biopsy, which confirmed that he had Ewing sarcoma. Marshall was referred to SCCA, where he saw Dr. Elizabeth Loggers, an oncologist who specializes in sarcoma.

"Dr. Loggers is in high demand but when she made it into my room, she was there as long as we needed her,” says Marshall. “She was very honest and didn’t sugarcoat things at all, but she was very supportive and encouraging at the same time.”

Because Ewing sarcoma is considered a disease of childhood, Marshall’s care incorporated a clinical trial underway at Seattle Children’s that called for the addition of a drug, Topotecan, on top of the usual chemotherapy regimen. Treatment was grueling: He had 23 weeks of chemotherapy before surgery to remove the tumor, which had to be paused because Marshall had lost too much blood. The remainder of the tumor was removed two days later, followed by nine weeks of radiation overseen by Dr. Edward Kim, a radiation oncologist and sarcoma specialist, and 13 more weeks of chemotherapy.

When Marshall got sick, he had been with Precision Ironworks for 20 years, starting as a helper in the shop and working his way up to management. “When I was diagnosed, the old ownership really took care of me,” he says. “I was given a lot of time off. The guys in the shop drove me to radiation.”

In January 2016, he was declared NED: no evidence of disease. For the first year after that, he had scans every three months, then the interval increased to every six months. Now that he’s five years post-treatment, he has annual scans to monitor his health and make sure the cancer has not returned.

Dr. Loggers was struck by how Marshall dealt with his diagnosis. A fitness buff, Marshall was used to working out six days a week, but the treatment for his sarcoma made that difficult. He lost strength and weight. “Everyone has to cope with their disease in their own way,” she says. “Loss of physical ability and loss of control is often one of the most difficult aspects of a cancer diagnosis. It’s not uncommon for people who are used to being active to have the most difficult time, but Cade handled it with a lot of grace. His mindset was: ‘This is temporary, this is what I must do now to get through this and come out the other side.’ He put his head down and with help from his wife, that’s exactly what he did.”

Dr. Loggers has been part of the design team for the new building, so she finds it especially meaningful that one of her patients owns the company that provided the steel to underpin the structure. “It reflects what all of us clinicians think is so special about SCCA—that it’s a true partnership with our patients, their families, our staff and faculty, who all work together to build a better future for the next generation of cancer patients,” she says. “Cade saw this experience of cancer as not just a challenge or setback but as an opportunity to give back and pay it forward.”

When a building project has a special sort of significance, construction workers often observe a tradition called a “topping off” or “topping out” ceremony in which the final steel beam is laid onto the frame. The ceremony for the new clinic building will take place Nov. 17, when the beam will be maneuvered into place. It has been signed by members of the design team, including Dr. Loggers, as well as Dr. Kim and Marshall, who wrote his name and “U number”—his SCCA patient number—in black Sharpie. The beam will not be visible once construction is complete, but Marshall is happy to be leaving an indelible mark on a place that did the same for him.