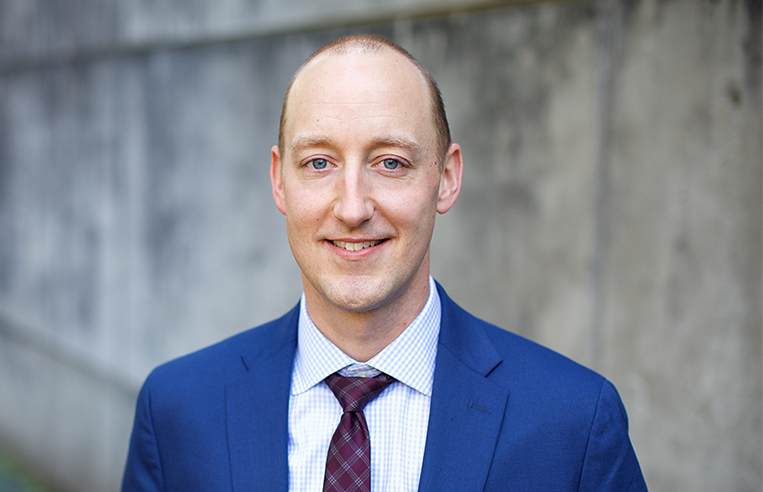 Now, HIFU is finally gaining traction in the U.S. after a long history of use in Europe and Asia and FDA approval in 2015. As an HIFU expert, Dr. Schade has been researching next generation HIFU technologies for more than 10 years, most of that time with engineers at the University of Washington’s Applied Physics Lab.

Because it is noninvasive and uses non-ionizing sound waves that have fewer side effects, HIFU is popular among patients who increasingly seek this therapy over surgery and radiation. Insurance coverage is also improving, Dr. Schade says. Medicare and some private payers now cover the procedure.

HIFU uses a transrectal approach to target the prostate with a high-intensity beam of sound energy. The transducer concentrates ultrasonic energy onto a small area of tissue and destroys it with heat. Outside that area, energy levels are low and the tissue is unharmed.

At SCCA, Dr. Schade has access to the most advanced HIFU technology available — the Focal One. This device has several features, including:

HIFU is an outpatient procedure that takes about two hours. “Recovery is usually quick,” says Dr. Schade. “The most common short-term side effect is swelling of the prostate. Patients go home with a catheter to help them urinate until the swelling subsides, which takes about a week.”

Another feature of HIFU is MRI fusion, which uses an MRI image uploaded to the HIFU device. During the procedure, the device performs a 3D ultrasound scan of the prostate and combines it with the MRI image. This picture allows Dr. Schade to precisely plan treatment to target the tumor and a border area around it.

The success of tumor mapping in HIFU relies heavily on the quality and interpretation of MRI images. For this, Dr. Schade looks to SCCA’s radiology team, who have access to the latest MRI equipment and protocols. They also have extensive expertise annotating images.

Throughout the procedure, Dr. Schade continuously monitors progress. “The prostate might move a bit or shrink during the procedure,” he says. “We watch closely and pause to adjust the treatment plan as needed.”

Compared with surgery and radiation therapy, HIFU reduces long-term side effects, including:

Patient outcomes have been difficult to measure, Dr. Schade says. “Prostate cancer is slow-growing and technologies are changing rapidly,” he says. “We don’t currently have any randomized trials comparing outcomes between HIFU, surgery and radiation therapy. But based on what we know, we think that cancer control with HIFU is similar to what we would expect for surgery and radiation.”

Currently, surgery and radiation are the standard of care for the treatment of localized prostate cancer, but Dr. Schade expects that will change with more data. A patient registry in Europe and early plans for similar registries in the U.S. may provide the data needed to establish HIFU outcomes.

HIFU is also an option for men who have localized recurrent prostate cancer after radiation. However, calcifications can block sound waves and may be a contraindication to HIFU if they are near the tumor.

Dr. Schade evaluates patients for HIFU carefully to ensure they are good candidates. As part of the patient evaluation, he typically performs a repeat biopsy and MRI.

“I’m finding that many men who are initially interested in HIFU have a higher-grade cancer or more extensive involvement of the prostate than the original tests showed,” he says. “In cases where we need to treat a larger area of the prostate, it usually makes more sense to recommend surgery or radiation, since we have more data supporting it.”