Wendy and Barry Brown of Sequim, Washington are high school sweethearts who have been married for almost 50 years. While they’re now retired, Wendy spent 30 years as an oncology nurse in Seattle and Barry worked for 30 years in the printing industry. They stay busy with their two children, four grandchildren, and their golden retriever, Ranger, a certified therapy dog. When they aren’t spending time with their family, Wendy and Barry enjoy hiking and walks in the beautiful backdrop of the Olympic peninsula. 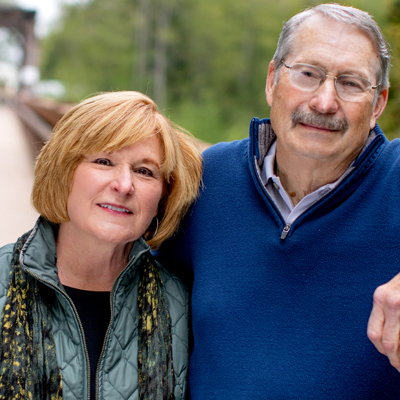 In October of 2019, Barry, who is 73 years old, and therefore part of a high-risk age group for prostate cancer, received a Prostate-Specific Antigen (PSA) test during his annual check-up. A few weeks later, following their daily evening walk, they were reminded to check his PSA test results when they saw a prostate cancer story on the local news channel. The story was about Steve Pool, the retired chief weathercaster with Seattle-based TV station, KOMO 4, who’s also a former SCCA Proton Therapy Center patient. Steve shared his experience battling prostate cancer with proton therapy in the hopes that others would also prioritize their health.

Thanks to Steve’s story, Wendy and Barry checked Barry’s PSA test results and were concerned to see they were slightly elevated. Six months later, after several follow-up visits to a urologist, and eventually a biopsy, they learned that Barry had prostate cancer. Barry’s family has a history of cancer, which is the reason he knew he needed to begin treatment as soon as possible.

“Given the wide-reaching platform I had as part of the KOMO 4 family, it was important to me that it be used to help others take care of themselves and their health. I am humbled to learn that at least one other person heard my story and caught their cancer in time to treat it,” said Steve Pool. “The SCCA Proton Therapy Center, Dr. Ramesh Rengan, and his entire team are amazing. They took excellent care of me from my diagnosis through post-treatment and I highly recommend other prostate cancer patients look into proton therapy as a treatment option.”

After a decades-long career as an oncology nurse, Wendy was concerned for her husband because there was an initial risk that the cancer had spread—which, to her relief, was ultimately not the case. Even so, Barry’s diagnosis still hit close to home as she lost her father to prostate cancer and her mother to lung cancer.

Barry and Wendy, along with their son, Josh, immediately started researching cancer treatment options. Josh helped to take notes and process the overwhelming wave of information. For other people supporting a loved one through cancer treatment, Wendy recommends making a list of questions to ask the doctor and having a friend or family member listen in during the treatment conferences to ensure everyone received and understood the same information.

Wendy and Barry’s family and friends supported the couple as they trekked to the SCCA Proton Therapy Center in Seattle for daily treatments. They varied their travel plans, including spending a few weeks in their camping trailer in the backyard of their son’s home north of Seattle, but mostly ferrying back and forth from Sequim. Once a week, either Barry’s sister or Josh would meet Barry at the ferry terminal and drive him to the Proton Therapy Center, giving Wendy the day off from the long commute. When they were away from home, Wendy and Barry were enormously grateful to their neighbors who helped out by watering plants and mowing their lawn during the busy weeks of treatment.

Wendy was there every step of the way, helping to navigate travel logistics and taking care of day-to-day needs, like packing snacks for the long trip to Seattle and back, about three hours each way. She tracked Barry’s progress by marking the days of his  treatment off with chalk on the sidewalk next to their home. On the final day of treatment, she created signs to celebrate outdoors with their family.

Today, Wendy and Barry are looking forward to resuming their day-to-day life and celebrating their upcoming 50th anniversary.  They are happy with their experience at the Proton Center and the consistent communication they received which put them at ease.  They knew when they called the Center, they would always reach someone who would help.

For fellow prostate cancer patients looking into treatment options, Barry encourages them to seek proton therapy treatment because the daily treatments are quick, painless, and the side effects such as frequent urination, hot flashes, and fatigue were manageable when compared to less-targeted, more invasive treatment options such as conventional radiation therapy.