Diagnosed young with a brain tumor, Brian FauntLeRoy maximizes quality of life through a clinical trial

No one wants a brain tumor, but without it, Brian FauntLeRoy and his wife, Rachel, probably wouldn’t be who and where they are today.

Brian and Rachel, both 23, began dating as juniors in college, where he played football and she played soccer. They had had been together for a year when Brian woke up one evening shortly before Christmas 2019. He had fallen asleep and Rachel was leaving his house in Helena, Montana, where they both attended Carroll College, when he had a seizure.

Rachel drove him to the hospital, where an MRI revealed a tumor. She came with him to Seattle Cancer Care Alliance (SCCA)/UW Medicine (UW), where his doctors recommended he seek treatment. And she was by his side after surgery, where SCCA/UW neurosurgeon Dr. Daniel Silbergeld removed a golf ball-sized tumor from his left temporal lobe, representing about 80% of the tumor.

“Rachel was there through everything,” says Brian. “She never turned away. I took for granted our relationship.  After recovering, my diagnosis clarified things for me.  In a way, it woke me up.”

Rachel agrees. “This whole process made you realize who you are and what you want,” she says.

What Brian wants now is to become a physical therapist, a career he had considered for years. He and Rachel now live in Missoula, where Brian was accepted into University of Montana’s physical therapy program. Rachel is in the process of applying to medical school. 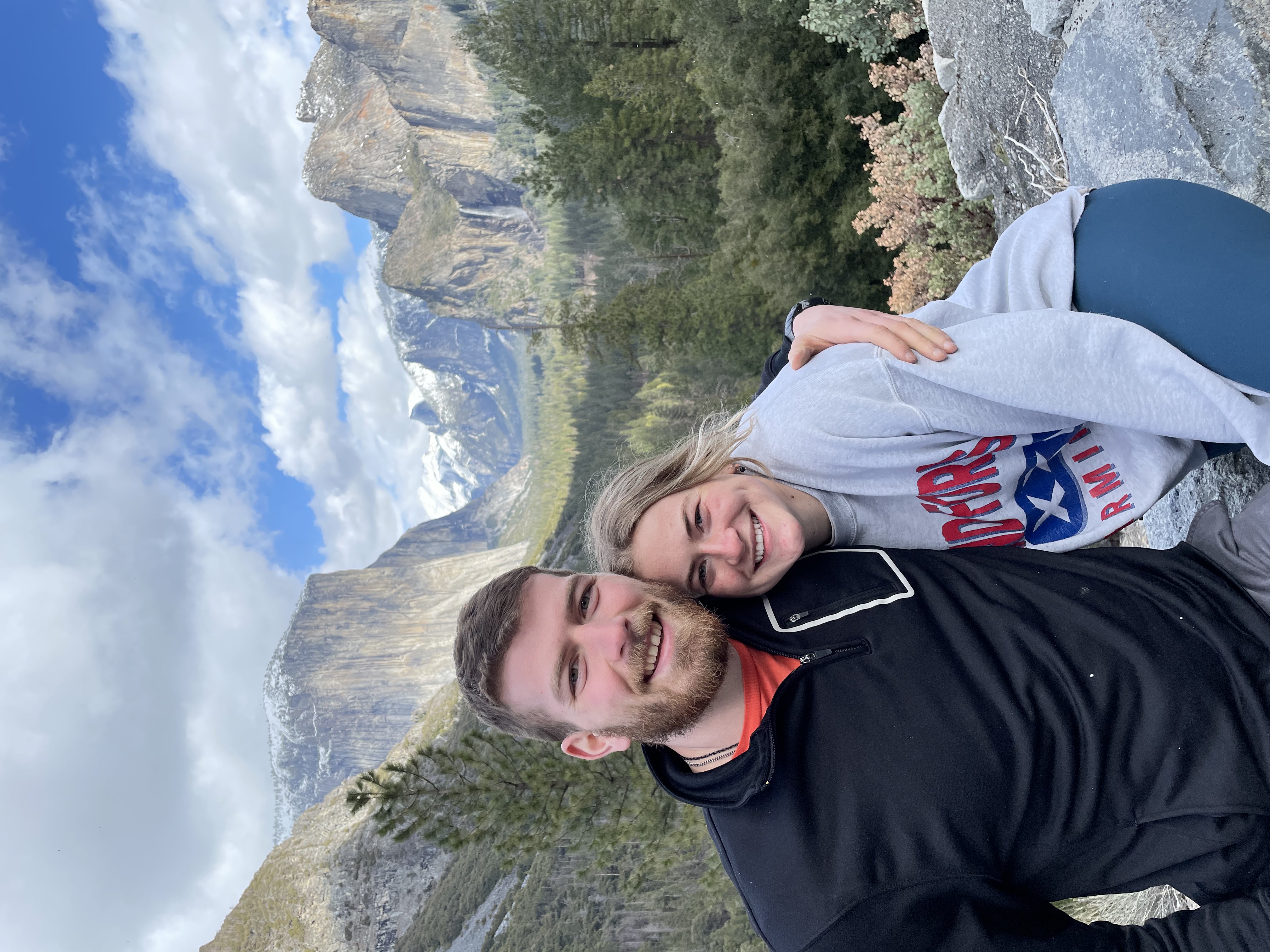 Opting for a clinical trial

After Brian’s surgery in January 2020, recovery was difficult. His memory was temporarily affected, and he couldn’t remember words such as “phone,” “toothbrush” or “car.” The memory loss wasn’t unexpected; post-surgical swelling can lead to challenges with word recall. “I had to go through a process of relearning,” says Brian.

During surgery, care was taken to avoid areas of his brain that could result in lasting problems with word recall. “They woke him up and did flash cards with him while they probed his brain,” explains Rachel. “If he couldn’t recall the word on the flash card, that’s not an area they would take out.”

Brian was referred to Dr. Vyshak Venur, a neuro oncologist at SCCA, to help determine whether treatment should begin with radiation and chemotherapy, or observation, which involved monitoring the remaining part of the tumor that couldn’t safely be removed because it was too close to basic motor functions and language areas.

Dr. Venur recommended observation, which seemed like the best option for what had been characterized as a grade 2 oligodendroglioma, one of the more slow-growing types of brain tumors. It’s likely that the tumor began growing when Brian was in middle school but caused no symptoms until it grew enough to trigger a seizure. “In contrast to glioblastoma, the most common brain tumor with a median survival time of 15 to 18 months, this is on the extreme other end of the spectrum for survival,” says Dr. Venur.

Starting chemotherapy and radiation after surgery is typically the standard course of treatment, but it permanently affects quality of life and impacts memory, says Dr. Venur.  Since Brian is young and the tumor is slow-growing, regularly observing the tumor for changes allows Brian to avoid unpleasant side effects of chemotherapy and radiation. Radiation, in particular, can lead to irreversible memory loss, diminished processing speed and ability to multitask, along with nerve pain and nerve damage.

Dr. Venur also offered Brian another option: once he reached a year post-surgery, he could choose to participate in a clinical trial designed to extend his life. The trial involves a medication, an IDH inhibitor that is currently FDA-approved to treat leukemia and is taken daily in pill form. The IDH gene is altered in patients with oligodendroglioma.

The trial is double-blinded, which means that Brian is randomized to one of two groups: one group receives the medication while the other group receives a placebo. Neither Brian nor Dr. Venur knows which group Brian is in.

Every four months, Brian has an MRI to monitor the tumor for changes. If there is significant growth, Dr. Venur will find out to which arm of the trial Brian has been assigned. If he’s on the placebo arm, he will cross over to the trial’s medication arm and start receiving the IDH inhibitor. If he’s on the medication arm, he will stop receiving the drug and chemotherapy and radiation will be considered.

“We did not want to change his quality of life permanently,” says Dr. Venur. “This trial allows Brian to continue living his life, maximizing his quality of life and his survival. With brain tumors, treatment can have a huge impact on quality of life in terms of basic function and day-to-day activities. When developing a treatment plan, we need to be really cognizant of that.”

The trial is intended to slow the growth of the tumor while maintaining Brian’s quality of life as long as possible. Brian is taking advantage of every minute, focused on his physical therapy coursework and supporting Rachel as she works on her medical school applications.

Rachel believes that Brian’s diagnosis has clarified his life path. “It has opened him up to trying more things and wanting to experience all he can,” she says.

One of those experiences includes walking down the aisle. Brian and Rachel got married in May 2021. Several months later, Brian continues to reflect on how his life has changed in ways he couldn’t have imagined a few years ago. He is not grateful for his diagnosis, but he is grateful for how it has given him a clear purpose that most twentysomethings can’t imagine. “This experience has been inspirational,” he says. “I don’t want to waste time anymore. At the end of my life, I don’t want to have regrets.”