It’s a fairly universal experience to feel stuffed to the brim after Thanksgiving dinner. So Angie Ballou wasn’t overly concerned when her stomach started hurting, or even when she threw up after her holiday meal in 2017. “I figured I ate too much,” says Ballou, 47, who was living in Marysville, Washington, at the time. 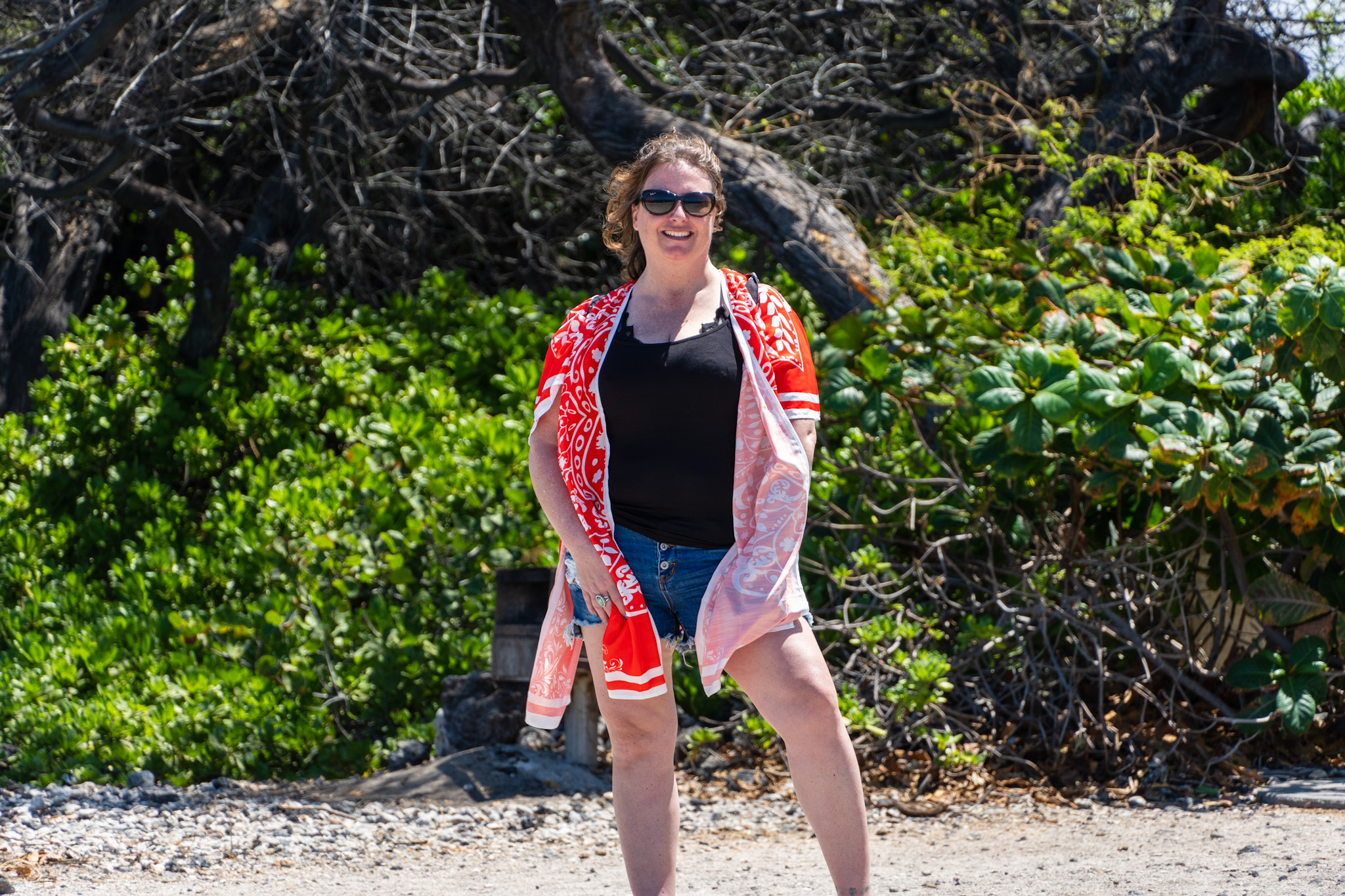 But when the sharp pains continued, she saw a doctor, who ordered an ultrasound and blood tests that came back normal. A few weeks later when she still wasn’t feeling better, she returned for a CT scan that showed a mass in her small intestine. That led to surgery at a community hospital and a diagnosis of adenocarcinoma, a cancer that arises in the glands that line the interior of organs, followed by six months of chemotherapy that seemed to clear things up.

In 2019, Ballou, her husband and two sons moved to Redmond, Oregon, attracted by the array of outdoors options including camping, hiking and mountain biking. They were enjoying their new surroundings when a routine follow-up scan in May 2020 revealed something unusual: a hazy area in her small intestine that her oncologist couldn’t identify.

Surgery confirmed that it was cancer again. Her local oncologist was pessimistic. “He said I had two to three years to live,” says Ballou, whose thoughts immediately turned to her sons, who were 12 and 16 at the time. "I couldn’t say anything at that point because all I was thinking about was my two boys growing up without a mom. But my husband spoke up and said we wanted to be referred to Seattle Cancer Care Alliance (SCCA) because he knew they have some of the best cancer doctors in the world.”

Not long after, Ballou met with Dr. Stacey Cohen at SCCA, which is now Fred Hutchinson Cancer Center after merging with Fred Hutchinson Cancer Research Center on April 1. Dr. Cohen refined Ballou’s diagnosis to stage IV appendix cancer with peritoneal carcinomatosis, which means that the cancer had spread inside her abdominal cavity. “She said it was very serious but there is always hope,” says Ballou. Dr. Cohen prescribed a new chemotherapy regimen. She also told Ballou about a complex surgical procedure she thought may be helpful. The procedure, hyperthermic intraperitoneal chemotherapy, or HIPEC, is a combination of surgery and chemotherapy performed only by specially trained surgeons. As luck would have it, Fred Hutch was about to welcome Dr. Harveshp Mogal, a new surgical oncologist who specializes in HIPEC.

"Angie is young, healthy and highly motivated,” says Dr. Cohen. “She came to us asking for something different than what she’d been told before. We intensified chemotherapy to best position her to be a good candidate for this surgery. She was one of the first patients that Dr. Mogal saw because I had her primed and ready when he arrived, and she was robust enough that we thought she could tolerate the surgery."

Dr. Mogal arrived at Fred Hutch in November 2020 after a fellowship at Wake Forest University, one of the top HIPEC centers in the country, followed by four years at the Medical College of Wisconsin, where he led the HIPEC program. These experiences positioned Dr. Mogal to build a HIPEC program at Fred Hutch and UW Medical Center from the ground up. The program is centered around a multidisciplinary HIPEC team and tumor board — a group of experts that reviews each patient’s case to share knowledge and determine the best treatment. “This enables us to provide patients with a comprehensive assessment and plan tailored for every individual patient’s needs,” says Dr. Mogal.

HIPEC is mostly used for people with gastrointestinal cancers that have spread to the peritoneum, the lining that envelops the abdominal organs. HIPEC can be useful for people with other cancers, including those originating from the colon, appendix and small intestine. It may also be useful to treat peritoneal mesothelioma, ovarian cancer and some rare forms of sarcoma. “The right candidate depends upon their tumor biology,” says Dr. Mogal. “HIPEC is an aggressive procedure that takes multiple hours, with potential removal of multiple organs in the abdomen. We want to be thoughtful about offering it to patients by trying to ensure that the benefits outweigh the risks."

What happens before chemotherapy is the more important part of the procedure: cytoreduction, the surgical removal of all visible tumor in the abdomen. The surgery is followed by heated chemotherapy that kills microscopic tumor cells. "It’s basically a chemo bath in the abdomen,” says Dr. Mogal. “I tend to describe it as a car wash but one on the inside instead of the outside.”

Research has shown that heat can kill cancer cells. “Heat synergizes with the chemo agents we select,” says Dr. Mogal. “It helps them penetrate and kill cancer more effectively."

The surgical team connects catheters placed into the abdomen with a perfusion pump; they temporarily close the abdomen so that the fluid remains inside. Then chemotherapy fluid heated to between 106 and 108 degrees Fahrenheit circulates between the abdomen and the pump, where it’s reheated and returned to the abdomen over the course of two hours. “After all the visible tumor in the abdomen is surgically removed, we then infuse the heated chemo solution,” says Dr. Mogal. “We want to make sure it’s not pooling around in any one area so we gently move the belly back and forth to make sure the chemo sloshes around evenly.”

For Ballou, the decision to proceed with HIPEC was clear. She and Dr. Mogal discussed her available options: staying on chemo for the rest of her life or trying HIPEC to give her a shot at long-term survival given that she was young and otherwise healthy.

Dr. Mogal even provided support when Ballou’s insurance company initially denied coverage for the HIPEC procedure. He provided case studies and other supporting documents, which led to approval. “Without Dr. Mogal’s persistence, I don’t know what would have happened,” says Ballou.

The 12-hour surgery took place in February 2021. Dr. Mogal removed part of Ballou’s small intestine, along with 10 inches of her colon and her gall bladder. He also performed a complete hysterectomy, omentectomy — removing the omentum, tissue that covers the stomach and other abdominal organs — and stripped the peritoneal lining before infusing the hot chemo. “I had staples from just under my breasts all way to my pubic area,” says Ballou.

It was tough those first few weeks and painful getting up and down. But she amazed her care team — and her coworkers — when she felt healthy enough to return to her job as a bank branch manager after just six weeks.

She worked hard at regaining her strength. At first, she was only able to walk down her cul-de-sac and back. But soon she added in an easy hike, then a more rigorous one. Biking came next. In the winter of 2021-22, Ballou skied 12 days. "I feel great right now. I am so thankful for the opportunity to spend more time with my family, my husband, my kids. I’m so thankful for Dr. Mogal and Dr. Cohen. If I just listened to my first doctor, I may not be here right now.”

Community oncologists often have access to fewer resources and treatment options than oncologists at major academic and research centers such as the Hutch. But Ballou’s local doctors partnered with Dr. Cohen so that she could receive chemotherapy close to home. “All our teams worked together well,” says Dr. Cohen, "and this collaboration led to tremendous success that was life-changing for Angie."

Throughout her ordeal, Ballou’s husband had a saying: “Something good will come of this.”

She got that sentence tattooed on her arm. "You realize this makes you stronger,” says Ballou, who now travels every few months to the Hutch for a CT scan to monitor her health. "It's made my whole family stronger. We appreciate every single day we have together.”

Cancer that forms in the glandular tissue that lines certain internal organs and makes and releases substances in the body, such as mucus, digestive juices or other fluids. Most cancers of the breast, pancreas, lung, prostate, colon, esophagus and stomach are adenocarcinomas.