For someone who’s been wrestling with a rare and aggressive cancer for eight years, Keith Lang is a very upbeat guy. “I'm a firm believer in being positive and happy,” says Lang. “If you can’t do that, you can’t fight a good fight.” 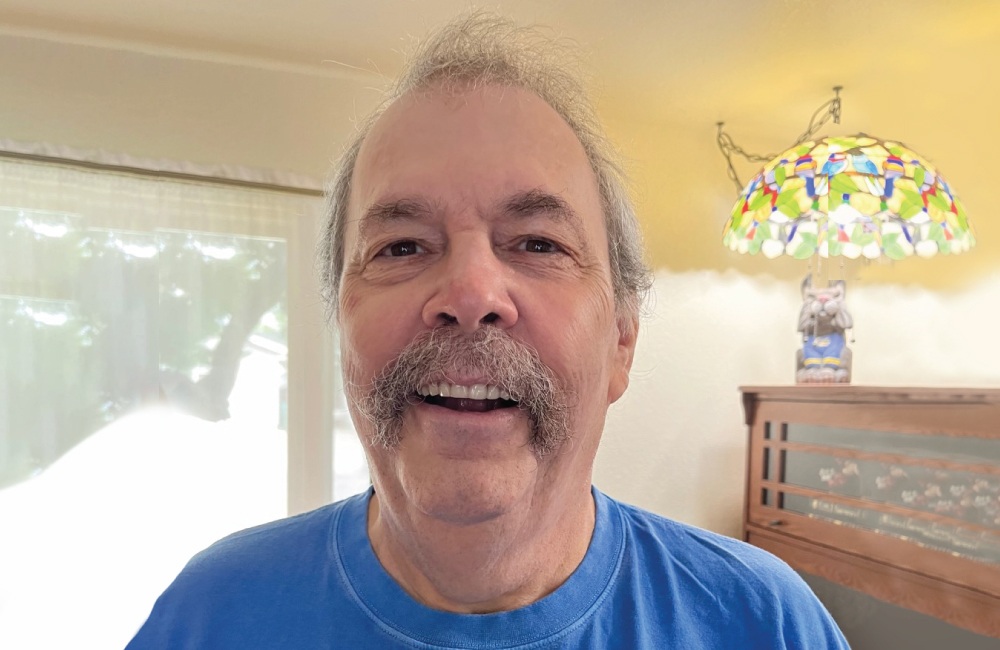 Lang, 67, has needed to muster considerable emotional and physical strength since 2014, when he first noticed an odd thickness in his groin area where his leg met his torso. After waiting a month to see if it would clear up, he went to see his doctor, who sent him to a surgeon for exploratory surgery.

Picture a piece of coral, twisted and riddled with small holes. That’s how Lang describes his lymph nodes, which cancer had split into smaller nodules, causing the strange texture he’d noticed in his groin. A biopsy revealed that Lang had Merkel cell carcinoma, the least well known but deadliest skin cancer.

For seven years, Lang chugged through rounds of chemotherapy and radiation at a clinic near his home in Billings, Montana. He endured multiple surgeries. "It's kind of like playing whack-a-mole,” he says. “We would radiate it on my leg, and it would show up over in my liver or once in my adrenal gland. It showed up a couple times in my lymph nodes in my arm pits and around my voice box and thyroid.”

In 2017, surgeons removed Lang’s adrenal gland and a lump in his upper colon. The following year, he started immunotherapy, which worked well for a couple years. But by November 2021, a CT scan revealed more than 150 nodules of cancer in his leg. It was time to find a new treatment.

Lang’s wife started researching other options and discovered clinical trials at Seattle Cancer Care Alliance, now Fred Hutchinson Cancer Center. "We are not ones to throw our hands up and quit,” he says.

Lang is now enrolled in a Phase 2 immunotherapy clinical trial testing a potential new way to administer immunotherapy drugs that researchers hope will be more effective. The medical team directly injects treatment into three of his cancerous nodules at a time and administers a different immunotherapy intravenously. Lang travels to Seattle every three weeks for the experimental treatment after initially coming weekly for seven weeks.

While in town, he and his wife stay at SCCA House, one of two residential options that Fred Hutch offers patients. "It’s less expensive than a hotel, it’s clean, and the shuttle service to the clinic is great,” says Lang. “They even send a volunteer driver to pick me up at the airport.”

Lang’s most recent scan showed that his cancer had shrunk by 38%. “It had started up again around my thyroid gland and that’s all gone,” says Lang. “Whatever they’re injecting is really working.”

Skin cancer is the most common cancer, which makes sense considering that skin is the body’s largest organ, and it’s susceptible to damage from UV radiation.

Merkel cell carcinoma (MCC) has two categories: Up to 80% of cases are virus-positive, associated with a virus that is present on the skin of most people from an early age. It doesn’t typically cause problems, but occasionally, as in Lang’s situation, it can lead to cancer. The remaining percentage is virus-negative, attributed to extensive exposure to sunlight.

The good news is that both types of MCC are very responsive to immunotherapy. “We have had tremendous success with immunotherapy,” says Dr. Bhatia. “Our center played a major role in the development of two drugs that the FDA approved for treatment, Keytruda and Bavencio.”

Immunotherapy is often used in more advanced stages of MCC that can’t be cured by surgery or radiation. “These drugs work wonderfully for up to 60% of patients,” says Dr. Bhatia. “When they work, they can work really well for long periods of time. But sometimes they work in the beginning, then they stop working.”

That was Lang’s experience. He was treated with both drugs, plus chemotherapy and radiation, but by the time he arrived at Fred Hutch in early 2022, his cancer had progressed significantly. The dozens of tumors on his leg and beyond made it difficult for him to walk.

At Fred Hutch, physician-scientists wondered whether injecting immunotherapy drugs into tumors could prompt an immune response against those tumors. It’s that idea that is being tested in the clinical trial in which Lang is enrolled.

“But we don’t just want it to work in the tumors that we inject,” says Dr. Bhatia. “We want the immune response to spread to other areas.”

Although the trial is still ongoing, the approach appears to be effective in Lang.

“Most of the time, we injected the same three tumors,” says Dr. Bhatia. “Within a few weeks, those had shrunk, as well as other tumors that had not been injected. Out of a total of 100-plus tumors, we injected only five or six, but everything has been shrinking. Keith’s leg swelling has decreased, his pain has gone away, and he’s able to walk much better.”

Lang will continue this experimental treatment as long as it’s effective for him. “We hope that will be for a very long time,” says Dr. Bhatia.

Lang considers himself fortunate to be enrolled in the trial. “Merkel cell is known to be an insidious cancer that can be treated but not cured,” says Lang, who says he was one of only 250 people in the U.S. diagnosed in 2014 with Merkel cell carcinoma. A mapper for Montana’s Department of Revenue, Lang retired the day he found out he had cancer. He wanted to focus his energies on fighting his disease.

He’s been in continuous treatment since 2014, save one three-month span of time, and he’s prepared for that to continue indefinitely. Rather than feel dejected about the years of treatment, he is grateful that he has found a regimen that’s working. “I learned early on that life is going to knock you upside the head if you let it,” says Lang. “I don’t plan to let that happen.”