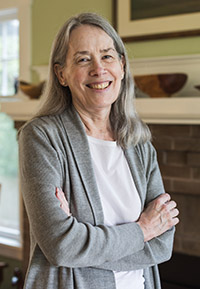 Miggie Olsson had been chasing symptoms for years. About every 10 years she’d check in with a doctor about short, four-day bouts of abdominal inflammation and a feeling of fullness. Different doctors tested her for lupus, gall bladder disease, helicobacter pylori, celiac disease and finally acid reflux. None of the tests revealed anything specific, but the feelings of inflammation seemed to be getting worse.

“I was in good shape!” Miggie says. “I was a runner and a power-lifter. But something wasn’t right. I was the person who was never sick.”

Finally, her internist, “who is great,” Miggie says, ordered a CT scan (computed tomography). In April 2006, this scan revealed that Miggie actually had a very large tumor in her pancreas that was growing into her stomach, spleen and the lining of her left kidney.  There also were multiple large lymph nodes around the pancreas. A biopsy of the mass showed adenocarcinoma – the most aggressive and dangerous kind of pancreatic cancer.

Miggie was fast-tracked into Seattle Cancer Care Alliance. “They thought I must be in real pain, but I didn’t have any pain,” Miggie says. “It was more of a feeling of discomfort. I know I looked healthy, and it was amazing that I could be described as ‘dying’ by medical statistics.”

SCCA’s Dr. Sam Whiting became her oncologist. Miggie gives him all the credit for saving her life. “He’s very creative,” she says. “He never said that I didn’t have any chance against this disease. He was very supportive when other doctors might not offer any hope. I also liked the researcher in him. I needed to have science behind me, as I am distrustful of anything that approaches junk science.”

Dr. Mika Sinanan, chief of surgery at University of Washington Medical Center, initially wouldn’t operate on Miggie. “He said my cancer was inoperable and we would have to wait to see how effective the chemotherapy would be. He really didn’t have much hope,” Miggie says.

Dr. Whiting treated Miggie with “personal cocktails,” Miggie says. “I was started out on GTX, a combination of gemcitabine (Gemzar), docetaxel (Taxotere) and capecitabine (Xeloda). I lost every hair on my body, twice,” she says, “but I still rode my bike 35 minutes a day and made dinner every night.”

Miggie says she felt off-balance and crummy, but she expected to feel something at least. “I expected the chemotherapy to make life really miserable for me and my family, but it didn’t. I think every patient has to adjust to a new lifestyle while in treatment. There are some necessary changes, such as what you can eat, and you just get used to a new normal.”

Three months after she began treatment, all of Miggie’s tumors were significantly smaller and the pancreatic mass had shrunk from 11 cm down to 5 cm. "Also important," says Dr. Whiting, is that "a PET (positron emission tomography) scan had changed from very positive to negative in the pancreas and the lymph nodes. Her tumor marker was down to normal."

“I still had to convince him that I was a good candidate for surgery. His experience told him that patients with my initial diagnosis would probably have rice-size metastases throughout the abdomen, and in that case surgery would not help me,” Miggie says. “He agreed to do the surgery if a laparoscopic survey revealed no new metastases.”

On August 4, 2006 Miggie went in for surgery. “Dr. Sinanan found nothing, other than what was on the scan.” Miggie says. “He removed the diseased part of my pancreas, my spleen, part of my stomach, the capsule of my left kidney and a couple of lymph nodes. He left a suspicious lymph node that was wrapped around my aorta, because it was too dangerous to remove surgically.”

Miggie’s cancer was located in the tail of her pancreas, which happens in about 25 percent of cases. The cancer didn’t affect her liver, lungs or other areas typically involved when the disease begins to spread.

Miggie respects Dr. Sinanan very much. “He’s one of the very best surgeons for what I had,” she says. “And he said surgery would be the worst thing I would ever go through and take a long time to recover from. I had to respect his experience, but inside I was telling myself, ‘I don’t think so.’ I went home in just four days, after a wonderful experience at UW Medical Center.”

"Remarkably, from the original 11 cm primary tumor, there was only a single 1 mm (one-tenth of a centimeter) focus of viable cancer found by the pathologist," says Dr. Whiting. Yet, he was still concerned as another small spot of cancer remained present in a resected lymph node.

Because of her very advanced cancer, following surgery Miggie went through another three months of GTX chemotherapy, before Dr. Whiting switched the drugs to gemcitabine, oxalaplatin and erlotinib (Tarceva) and then to gemcitabine alone.  In August of 2007,  Miggie was ready for a break.

Then, after a few months of no treatment, “the suspicious lymph node on my aorta grew one centimeter,” Miggie says. In actuality, the node had grown to over 3 centimeters and a PET scan confirmed that it was positive.  “Dr. Whiting and Dr. Wui-Jin Koh, my radiation oncologist, decided radiation would be an effective way to get rid of the problem.”

Miggie had nine weeks of chemotherapy with cisplatin and irinotecan, and 26 fractions of radiation overlapping with the first six weeks of chemo. “At the end of that treatment I needed another break,” Miggie says. “I had been through about a year and a half of treatment and needed to get my strength back. My follow-up scans were clean, and kept being clean, so I never went back on chemotherapy,” she says.

The only thing Miggie takes now are pancreatic enzymes to assist with her food digestion.

Miggie’s family has a history of many different kinds of cancer. It’s because cancer was so prevalent in her family that made Miggie less fearful of having it. “I expected to get breast cancer or colon cancer, but that’s not what I got. My mother died of breast cancer after fighting endocrine cancers her entire adult life, and my sister had a double mastectomy for breast cancer. My father died of a sarcoma of the peritoneum. Pancreas cancer is a formidable opponent, but I just didn’t think the statistics applied to me,” she says.

Miggie has been through genetic testing at UW Medical Center, but nothing specific has been revealed. Miggie hopes that her contribution to the tumor bank will help with scientific research in the years ahead.

Her cancer behind her, Miggie no longer identifies herself with her disease. She has been cancer free since Dec. 2007. “I think I’m done now,” she says. “I don’t sweat scans or MRIs anymore, but if the cancer returns I’ll be fine. I’m in good hands.”

She’s still watched closely by Dr. Whiting. And she sticks close to SCCA as a volunteer now, too. “As a former patient, it’s very rewarding to help another patient who is on the ‘other’ side,” she says.  Dr. Whiting describes Miggie as, “a superstar patient and a superstar person who is always looking for ways to give back and help other patients.”

Seattle Cancer Care Alliance is an intimate cancer center, according to Miggie. “The people know you. It doesn’t feel big. It’s a community where everyone has cancer or knows it well. The doctors and nurses are very much in tune with the issues cancer patients can have, and I have appreciated so much how responsive they all are.

“I think it is an important piece of advice for any new cancer patient to choose your doctor well. When the initial panic subsides it would be an amazing gift to be able to let go of the worry about whether your treatment is the right choice. If you respect your doctor, trust your doctor is closely watching you, is someone who will listen to your needs and is responsive, it will be a whole lot easier to let the doctor worry about the cancer. That's a huge amount of stress off your plate.”