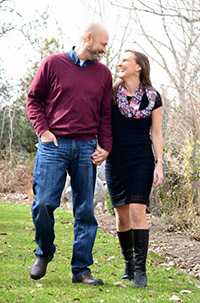 Ben Doherty and his wife Missy began training for a marathon in the spring of 2007. They had just relocated to Hermiston, Oregon from Arizona to be closer to family. Ben had opened a new law practice and they had purchased a small farm to raise cattle and kids. “All in all, the future looked very bright,” Ben says.

Turning back toward home after a run one morning in March, Ben felt pain in his leg. On his doctor’s orders, he rested and took ibuprofen. The next month, as Ben got up from his desk to dash out the door, he collapsed to the ground, no longer able to able to stand on that leg.

Ben couldn’t walk without the aid of a cane or later crutches. Going from doctor to doctor he eventually found the cause of this painful problem and was referred to Seattle Cancer Care Alliance.

Ben’s diagnosis was osteogenic sarcoma, cancer of the bone. More common in children and very rare in middle-aged adults, osteosarcoma is usually located at the end of a long bone. In Ben’s case, his cancer was located at the head of his left femur and “had eaten away the entire bone,” he says. There was only a one- to three-millimeter shell that somehow had not yet broken. “Until it did rather painfully shatter into a million pieces not too long thereafter,” Ben says.

“Our local doctors told us that the cancer care at Seattle Cancer Care Alliance is some of the best in the world,” Ben says, “but I had excellent insurance and could go anywhere for treatment, so we checked out everything for ourselves and were delighted to discover just how respected SCCA is in the medical community.”

From that point on, his life changed "dramatically,” Ben says. He closed his law practice and he and Missy moved to Seattle for treatment.

Within two weeks of diagnosis, Ben began aggressive inpatient treatment for sarcoma at University of Washington Medical Center. In one of the hardest decisions of their lives, Missy and Ben decided to send their two young children, Gavin, who was four at the time, and Elizabeth, age two, to their grandparents’ house in California for the next three months. “Being separated was hard for us all,” Ben says. “Until that point, we had never spent a night away from the children. We took the kids with us everywhere and never felt the need for date nights or alone time.”

Ben was started on standard therapy of Adriamycin (doxorubicin) and ifosfamide, “but the results were less than they had hoped,” Ben says.

After three months of chemotherapy, Ben had surgery to remove his upper femur (six inches) and the tumor, and to replace his hip. Then he began treatment on a clinical trial drug combination of methotrexate, doxorubicin, and cisplatin (MAP) followed by MAP, ifosfamide/etoposide, as per the EURAMOS protocol (European and American Osteosarcoma Study) that would last for the next 18 months.

Traveling between their home in Oregon and Seattle for treatment was arduous at best. “The first year, we logged more than 18,000 miles in just medical mileage,” Ben says.

Eventually, Ben was able to transfer his care to SCCA Network Member Kadlec Clinic Hematology and Oncology (KCHO), formerly Columbia Basin Hematology & Oncology, in Tri Cities, Wash., about an hour from his home. The doctors in Tri Cities worked directly with Ben’s SCCA health care team to continue his life-saving treatment. This also allowed his children to return home, which was very important to everyone in the family.

During this time, while he was focused on saving his life, Ben’s treatment was “amazingly and briefly interrupted” by the birth of his third child.

With a new hip in place, nerve damage and substantial loss of heart function because of the treatment, Ben’s cancer was finally put into remission.

“In the beginning, my doctors told me the chances of reaching remission were not in our favor,” he says. “But together, we beat the odds. We were also told that usually if there is a metastasis of the cancer, it usually occurs by the two-year mark. I remember clearly my two-year appointment with my doctor. He gave my wife and me huge hugs — there was no sign of cancer.”

Ben had two years and two months of being cancer free before a couple of lung nodules appeared. His SCCA care team decided to just watch them. Over time, the tumors grew slightly, but not alarmingly. Six months later, Ben started to develop other symptoms, like huge bruises, slow healing and very low energy. Ben had developed acute myeloid leukemia (AML) as a result of his sarcoma treatment.

“Once again, the odds were against us,” Ben says. “The standard AML treatments did not offer much hope, and my only real option was going into a clinical research trial.”

Ben met his new care team at SCCA who would beat his AML: Eli Estey, MD, and Kelda Gardner, PA.

“Dr. Estey did not think that standard treatments would have success given the specific genetic markers and source of the AML,” Ben says. But Ben was not eligible for the normal clinical trials either, because of his sarcoma and the lung nodules. “Dr. Estey worked tirelessly to find a new clinical trial that would give me my best chance of survival,” Ben says.

The trial consisted of clofarabine and ara-C followed by infusion of expanded umbilical cord cells “magic cells,” as Ben likes to refer to them.

“The results of the treatment with those drugs was nothing less than miraculous,” Ben says. “And I went into remission after just one treatment!”

The next phase was the bone marrow transplant which he received on September 8, 2011 to further eliminate the AML and replace the genetically damaged bone marrow. The transplant was difficult, and Ben ended up in the hospital for over 45 days with sickness and two brain hemorrhages.

The presence of lung nodules that might be a metastasis of the osteosarcoma complicated matters. Ben took part in a clinical trial that included post-transplant chemotherapy aimed at neutralizing the lung nodules and minimizing graft-versus-host disease. Despite the difficulties, in the end the results were full remission from AML and a successful bone marrow transplant.

During the initial treatments, Ben and Missy’s parents each kept the kids for two months. “But it was hard for all of us regardless of how great of help we received. We knew from our previous experiences just how hard it was for us, as parents, and for our kids to be separated. And in the back of my mind, there was the knowledge that more than likely the treatments would not work, and in that case I would have given up six relatively good months with my family and might only be left with a few months of rapidly diminishing health to spend together if the treatments didn’t work,” Ben says.

Thanks to the Family Assistance Fund from SCCA and Fred Hutchinson Cancer Research Center, Ben and Missy were given a grant to help offset their housing costs so they were able to afford to stay at SCCA House between AML treatments. “There is even free shuttle service that runs patients between facilities,” Ben says. “That made the daily appointments much less onerous.”

“The aid that the Family Assistance Fund provided was enough to allow us to be together as a family,” Ben says. “It is hard to describe how much of a difference it makes to receive visits and hugs every day while sitting in the sterile hospital for two straight months. No matter how good your nurses are, they are no substitute for the kind of emotional and spiritual boost that my three energetic children bring.”

“The final chapter so far of my medical story has been miraculous,” Ben says. “My doctors believe that I am unique. A great characteristic in general, but not one you want to hear from your doctors.”

Ben’s diagnosis of osteogenic sarcoma is rare, with only about 400 cases countrywide each year. To develop leukemia from treatment is also rare. And to simultaneously have an active sarcoma and leukemia is simply unheard of, remarks Ben.

Ben’s new bone marrow is becoming more established every day. But he has graft-versus-host disease as a result of his transplanted bone marrow. The medications he takes have given him diabetes. He has trouble with bouts of insomnia, brain hemorrhages, heart damage, nerve damage and chemobrain. “Despite all of that, I honestly feel better than I have in five years,” Ben says.

“We have all had challenges in life. Some are easier to overcome. Others seem as difficult to overcome as running a marathon: The end is so far away and the route is all uphill. Deciding to take on that marathon challenge, to meet it head on, to undertake daily training and crossing that starting line requires personal courage. Step-by-step, moment-by-moment you progress along the route. And by focusing on that next step, you will learn a great lesson -- that you can accomplish anything one step at a time,” Ben says. “Cancer has taught me similar lessons: To have the courage to run the race; To take life step-by-step; To look forward to the next moment regardless of whether it might be unpleasant or even painful; To have faith to carry on; And to never, ever give up.”