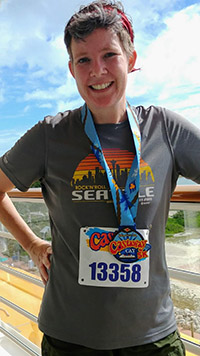 Amy Dullard is an outlier. She was diagnosed with Stage III pancreatic cancer at 39; the average age is 71. Virtually none of the risk factors for pancreatic cancer apply to her, and she has no known genetic markers for this or any other cancer. Amy is a successful senior software engineer at Microsoft — historically, a role where men have been the majority. Her aim now is to continue setting a new bar — as a pancreatic cancer survivor.

In the year following her diagnosis in February 2017, Amy has undergone chemotherapy, radiation therapy and a 16-hour Whipple surgery. When she first learned of her odds of surviving this cancer — the current survival rate for pancreatic cancer is 9 percent and, on average, people diagnosed at stage III have about 18 months to live — “I was devastated,” she says. “But I decided that my family and I needed a change in attitude.”

At her first appointment with her Seattle Cancer Care Alliance (SCCA) medical oncologist, Andrew Coveler, MD, Amy told him that she wanted to approach treatment “like I own a young, inexperienced baseball team. I’m looking for a coach who says: ‘We’re going to win the World Series. As the season progresses, we may need to modify our plan. Maybe we have to be satisfied with making the playoffs or finishing the season over .500. But I want a coach who goes in believing we can win everything.’ And Dr. Coveler gets it.”

Amy’s cancer hadn’t spread to any other organs. But it was locally advanced. The tumor was wrapped around an artery and was crushing her portal vein, completely cutting off blood flow to her liver. Venu G. Pillarisetty, MD, Amy’s surgical oncologist, estimated at the beginning that she had less than a 5 percent chance of ever qualifying for surgery.

The best treatment option was chemotherapy with the goal of shrinking her tumor. Amy began a grueling regimen of FOLFIRINOX, a combination of 5-FU, oxaliplatin, leucovorin and irinotecan. After a six-hour infusion, a pump administers 5-FU for 46 hours. By June 2018, she had undergone 19 of these treatments. But at the start, she was in unknown territory. To learn from others’ experiences, she joined several online communities. Hearing all the stories of loss from patients’ family members was overwhelming.

“I realized I needed to connect with patients who were going through the same fight as I was,” Amy says. She launched her Facebook group, Pancreatic Cancer Warriors, exclusively for patients. In the space of a year, it has grown to more than 700 patients around the globe.

“It’s a way for us to share notes on chemotherapy, side effects, clinical trials, surgeries, recovery and doctors,” says Amy. “What we’re doing here is not letting cancer break our spirits.” She has also committed her considerable energies to raising funding for and awareness about this cancer, including a trip to Washington, D.C., to advocate for the Pancreatic Cancer Action Network.

“The truth is that statistics are just averages,” she says. “Until they start attacking the tumor, you don’t know how it’s going to respond. You need to go in with a fight: You could be that person whose tumor shrinks.”

An awful and beautiful year

After four rounds of chemotherapy, Amy’s tumor had shrunk about 10 percent, “which isn’t nothing, but they really like to see 20 percent or higher,” she explains. She’d taken a leave of absence from work and moved in with her parents in Missouri. Family members had been taking turns flying from all over the Midwest to Seattle to be with Amy for every treatment; it would be easier to be closer to them. Dr. Coveler coordinated her treatment with Amy’s oncologist in Missouri.

When she returned to Seattle for scans in September 2017, the news was encouraging. Although her tumor wasn’t shrinking externally, it was pulling away from her vascular system, and Amy’s portal vein was starting to show blood flow. “Dr. Pillarisetty told me, ‘This might be a surgery we could do. It would be very difficult and would pose a high risk.’ And Dr. Coveler said, ‘We want to win the World Series,’” Amy laughs.

Amy underwent 10 radiation treatments pre-surgery to create new margins on her tumor. Her surgery took place right after Thanksgiving. “Dr. Pillarisetty called it a Super Whipple because of all the vascular involvement,” she says. He removed the head and part of the body of her pancreas, along with her gall bladder, duodenum and part of her stomach. “He was phenomenal.”

Amy’s formerly long red hair is now short and grey. Thus far, her scans post-surgery have shown no evidence of cancer. “I’d always been a long-term planner,” she says. “Now I don’t know what twists and turns life’s going to take. I plan until my next scan, because that’s where the fork in the road is. I’m going to fight really hard and enjoy life as much as possible. I’m very grateful for the freedom I’ve had to spend time with my family. I’ve had this awful year, but because of them, I’ve also had this beautiful year.”

For now, each day is another day of beating the odds.