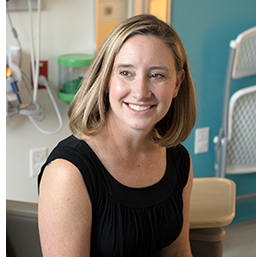 As captain of a 12-woman Ragnar Northwest Passage team, Amie Parker had the cardiovascular fitness of a seasoned runner.

For five years, she and her teammates had conquered the 200-mile relay course from the Peace Arch at Washington’s Canadian border, through the Skagit Valley, across the Deception Pass Bridge and into the charming town of Langley on south Whidbey Island.

So what explained her bothersome, persistent cough? Her lungs ought to be strong. Which is why she was surprised when the cause turned out to be not a common culprit, like allergies, but a rare form of lung cancer.

Tracing symptoms back to their roots

By the time Amie’s team completed their fifth annual relay in July 2017, she had been coughing for a few months for no apparent reason, and her primary care doctor had been trying to figure out why.

Could it be allergies? She tried allergy medicine, but it didn’t help. What about asthma? Doctors checked; Amie didn’t have that. Next they considered acid reflux, which she did experience sometimes. But tests showed it didn’t correlate with her cough.

As fall rolled around, Amie felt unusually tired and was losing weight. She headed back to work with the Mukilteo School District, where she supports K-12 teachers integrating technology into their classrooms, and the investigation into her condition intensified.

The surprising diagnosis comes in

A chest X-ray was followed by a computed tomography (CT) scan and appointment with a lung specialist. The imaging tests showed an area that might be cancer, but the specialist reminded Amie it could be something else less serious.

After all, Amie was a seemingly healthy nonsmoker and — at age 44 — a young one at that.

Finally, in October 2017, a biopsy and follow-up tests confirmed the unexpected: Amie had stage IV non-small cell lung cancer (NSCLC) driven by a mutation in a gene called ROS1.

“Several different mutations can drive lung cancer,” explains Amie, who has learned a lot about her disease since her diagnosis, including that ROS1 drives only 1 to 2 percent of NSCLCs. After months of wondering what was wrong, she says, “getting the diagnosis was almost a relief.”

Caring for the whole person

Soon, Amie and her husband, Tony, visited a local oncologist, who explained her options and expressed interest in treating her unusual disease.

For a second opinion, the couple came to Seattle Cancer Care Alliance (SCCA), where doctors were equally keen to treat her ROS1-positive lung cancer but also wanted to know how Amie was doing overall, how she was eating and sleeping.

“I felt like I had been seen not just for my tumors and my mutation but for who I was,” she says. The visit cemented her decision to receive care from SCCA’s Keith Eaton, MD, PhD.

“He’s a cancer survivor himself,” explains Amie. “I think that gives him a unique perspective on how it feels to go into that first appointment and what you, as the patient, might need.”

Amie is being treated with crizotinib (Xalkori), a targeted therapy that she takes twice a day in pill form. After initially shrinking her tumors, the medicine continues to reduce the tumor size and is keeping her condition stable.

Though she has some side effects, like nausea, and her stamina is not what it once was, she does run/walk intervals and feels almost back to 100 percent.

But she knows that no currently available therapy will hold off the progression of stage IV lung cancer forever. Eventually, her disease is expected to develop resistance to crizotinib, at which point she will need to try another medicine.

For now, she’s pleased this one is buying her time with Tony and their family — middle-schoolers Noah and Luke as well as their dog, Calvin, and big orange cat, Hobbes.

“Trying to explain to people that our goal isn’t cure is hard,” Amie says. “Success for us is to keep the cancer from growing.”

The power of support

If Amie’s running pals have anything to say about it, they’ll be partly responsible for that success. Together they’ve started a fundraising 5K/10K race called the Lungbuster — with a hilly route through Mukilteo selected specifically to challenge participants’ breathing capacity. Money raised goes to the Bonnie J. Adario Foundation, which supports ROS1 research.

“Working on the race has been really helpful,” says Amie. “We’re hoping we can fund research so we can find some options that will give me more time.”

The idea to give to this particular foundation came through Amie’s connection with ROS1ders (pronounced “ross-wonders”), an online community where she’s found support and knowledge.

“It gives me the information I need to go into my appointments feeling informed and knowing what questions I need to ask,” she says.

She recommends all patients connect with others who have their particular disease. But, she cautions, approach the Internet with a critical eye; the information you find could be out of date or about someone whose situation is different from your own.

Getting the most out of life

Already a person who tended to face life’s challenges head on, Amie moves forward with a balance of hope and pragmatism, which she and Tony instill in their boys, too.

“Our mantra is, ‘OK, this happened. Now what?’ We keep moving forward together as a family, and we don’t waste time worrying about what might have been,” she says.

A phone call to SCCA before Amie even came to her first appointment helped her apply this forthright attitude to telling her kids about her disease. The support person she spoke with offered her this language: “I’m not dying right now. I’m sick, there are treatments, and we’re going to keep going.” It worked well for their family.

“We’re not going to spend a lot of time agonizing over the fact that this happened,” says Amie. “We’re going to get the most out of the days we have together. And that’s what we do!”

Story update (10/10/18): The inaugural Lungbuster 5/10K was a sold-out success. The day was also a personal victory for Amie, who ran her first official 5K since her diagnosis ― next year she plans on running more and walking less.