Careful, regular self-examinations and routine exams by your health care provider are the best way to detect skin cancer in its earliest stages when it is easier to treat and cure.

Here are specific signs and symptoms of several major types of skin cancer as well as the precancerous condition actinic keratosis. 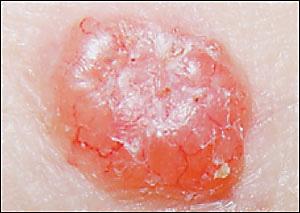 This type of cancer is usually found on sun-exposed areas of the skin like the scalp, forehead, face, nose, neck and back.

Basal cell carcinomas may bleed after a minor injury but then scab and heal. This can happen over and over for months or years with no visible growth, making it easy to mistake them for wounds or sores. They rarely cause pain in their earliest stages.

In addition to the bleeding and healing, these are other possible signs of a basal cell cancer: 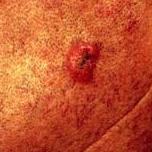 Generally found on the ears, face and mouth, squamous cell carcinoma can be more aggressive than basal cell. Untreated, it may push through the skin layers to the lymphatic system, bloodstream and nerve routes, where it can cause pain and symptoms of serious illness.

Squamous cell cancer often starts as a precancerous lesion known as actinic keratosis (described below). When it becomes cancerous, the lesion appears raised above the normal skin surface and is firmer to the touch. Sometimes the spot shows only a slight change from normal skin. 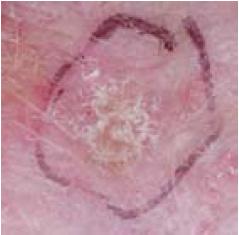 Many people have actinic keratosis (AK), also called solar keratosis, on their skin. It shows that you’ve had enough sun to develop skin cancer, and it is considered a precursor of cancer, or a precancerous condition.

Usually AK shows up on the parts of your body that have received the most lifetime sun exposure, like the face, ears, scalp, neck, backs of the hands, forearms, shoulders and lips.

Some of the same treatments used for nonmelanoma skin cancers are used for AK to ensure it does not develop into a cancerous lesion.

This abnormality develops slowly. The lesions are usually small, about an eighth of an inch to a quarter of an inch in size. You may see a few at a time. They can disappear and later return.

Melanoma skin cancer is much more serious than basal cell carcinoma and squamous cell carcinoma. It can spread quickly to other organs and causes the vast majority of skin cancer deaths in the United States. Usually melanomas develop in or around an existing mole.

Signs and symptoms of melanoma vary depending on the exact type and may include:

See more pictures and get details about different types of melanoma in our dedicated melanoma section.

Read about signs and symptoms of Merkel cell carcinoma, a rare type of skin cancer, in our dedicated Merkel cell section.

You may notice changes to your skin casually during your daily routine, such as when you put on lotion, look in the mirror or take a shower. Doing a thorough monthly exam is also important.

Learn how to examine your skin and the general warning signs to look for.