Most cancers in the liver started somewhere else, like the colon, and then spread to the liver. But cancer can also start in the liver itself.

What is liver cancer?

Primary liver cancer occurs when cells in the liver begin to grow abnormally.

Cancer cells do not respond to regular cell growth, division and death signals like healthy cells do. They also don’t organize normally. Instead they grow into a tumor, which may invade surrounding layers of tissue and possibly spread to other organs.

Cancer that starts in another part of the body, such as the colon or breast, can spread (metastasize) through the bloodstream to the liver. This is called secondary liver cancer.

What your liver does 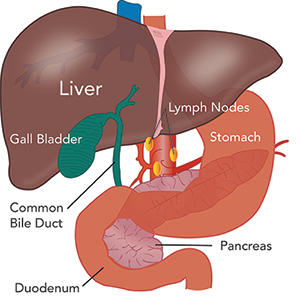 Your liver is a vital organ with many important functions.

Your liver gets its blood supply from two sources.

Small tubes, or ducts, inside your liver collect bile.

Most primary liver cancers are hepatocellular carcinoma or intrahepatic cholangiocarcinoma.

These are other rare forms of primary liver cancer, including:

Other conditions related to the liver

The Liver Tumor Clinic treats other conditions, too, including cancer in structures whose function is closely related to the liver, benign liver tumors and liver cysts.

Cancers in structures related to the liver include:

Many liver tumors are benign, meaning they cannot invade nearby tissue or spread to other organs. Even so, sometimes they need treatment because they cause symptoms or can transform into cancers. They include:

Cysts are benign encapsulated structures that contain fluid. Liver cysts are common, but they rarely cause symptoms and, therefore, are usually not detected. There are various types, including:

Liver cancer typically doesn’t cause symptoms until the disease is advanced. The following symptoms could occur:

Some symptoms of liver cancer are the same as symptoms of other problems, and they do not necessarily mean you have cancer. Talk to your doctor if you have any symptoms that concern you.

Liver cancer is usually diagnosed through:

Your team will recommend treatment based on the stage of your cancer, the health and function of your liver and your overall health.

The stage depends on the following:

There are multiple systems for staging liver cancers, including Roman numeral staging. In this system, liver cancers are grouped into stages I through IV, with stage I being the least advanced and stage IV being the most advanced. 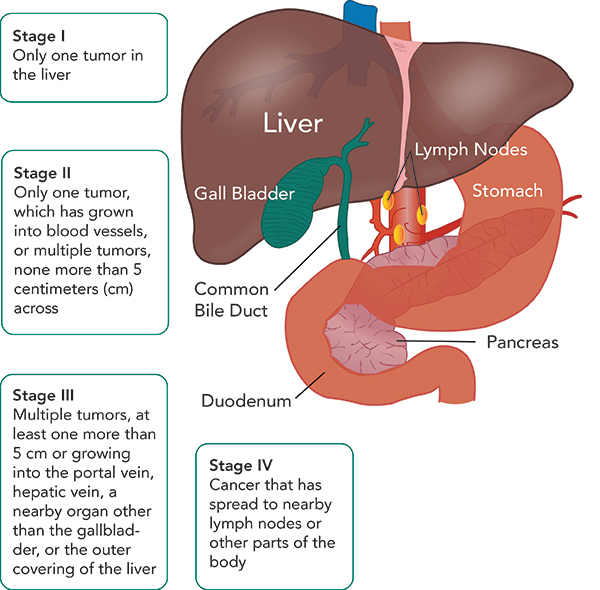 Along with staging your cancer, your doctor will check the following aspects of your liver function to come up with a score (Child-Pugh score or MELD score):

These factors may also increase your risk:

If you have chronic liver disease (cirrhosis), talk with your doctor about having liver cancer screenings. Generally, doctors recommend screening with ultrasound every six months.

How common is liver cancer?

Each year about 42,000 men and women in the United States are diagnosed with cancer of the liver or the bile ducts inside the liver.