Seattle Cancer Care Alliance (SCCA) offers comprehensive treatment from a team of experts for all types of Hodgkin as well as non-Hodgkin lymphoma.

What is Hodgkin lymphoma?

In people with lymphoma, something goes wrong inside the lymphocytes.

To understand lymphoma, it helps to know the basics about your lymph system.

What is the lymph system?

The lymph system is a network of tubes (lymphatic vessels) that slowly carry fluid from your tissues into your bloodstream to be recycled. The fluid (lymph) contains waste products from body tissues as well as immune system cells. 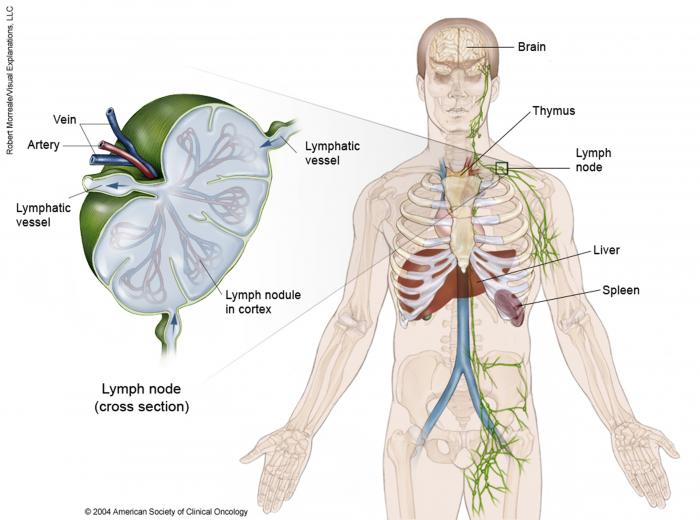 What are lymph nodes?

Lymph nodes are small bean-shaped organs linked by your lymphatic vessels. They are part of your immune system. They store lymphocytes and act as filters to trap foreign particles.

Where are these nodes?

What else makes up the lymph system?

Along with lymph nodes, you have other lymph tissue, including organs related to your immune and blood-forming systems, such as your spleen, thymus and bone marrow.

How do lymphocytes protect the body?

There are several kinds of lymphocytes.

It’s important to correctly identify the type and subtype of your lymphoma to determine which treatments are most likely to be effective.

There are two main types of lymphoma:

Within Hodgkin lymphoma, there are two types.

There are four subtypes of classic Hodgkin lymphoma, named for:

The subtypes are called:

This type involves nodules made up of lymphocytes and a variation of Reed-Sternberg cells sometimes called popcorn cells because of the way they look. Over time, about 10 percent of these lymphomas transform into aggressive diffuse B-cell lymphoma, a type of non-Hodgkin lymphoma.

The symptoms of Hodgkin lymphoma may be similar to symptoms caused by other conditions that are not related to cancer. Check with your a doctor if you feel concerned about any symptoms you have.

Symptoms of Hodgkin lymphoma include:

Usually lymph-node symptoms, like swelling, come on slowly. For instance, a person may have some swelling for as long as a year before diagnosis.

If your doctor suspects you may have lymphoma, they will do a physical exam to look for signs of the disease and ask about your health history.

To confirm the presence of lymphoma, you will need a biopsy. This means removing part or all of a lymph node or a small sample of tissue surgically or with a needle. Experts in identifying blood-related cancers (hematopathologists) look at the cells under a microscope to diagnose the disease and accurately identify the type.

You might also have any or all of these tests:

If you have lymphoma, you may need more tests to identify the type. These include an immunohistochemistry study; immunophenotyping, or flow cytometry; and cytogenetic analysis.

Staging means finding out how far lymphoma has spread in your lymph system or other parts of your body. Accurate staging allows your doctors to choose the most appropriate therapy for you — and help you avoid therapy that is not likely to be effective in your situation.

Hodgkin lymphomas range from stage I to stage IV, with I being the least advanced and IV being the most advanced.

Doctors may add a letter after your stage to describe more about your disease.

To further understand your lymphoma and recommend the best treatment for you, your doctor will use many other factors, such as whether you have:

If your lymphoma comes back after treatment, it is called recurrent or relapsed. Your doctor will order imaging tests or other tests to restage it.

How common is Hodgkin lymphoma?

About 8,300 people are newly diagnosed with Hodgkin lymphoma in the United States each year.

You may be at higher risk if any of these is true: