In the last decade, major strides have been made in the early diagnosis and treatment of esophageal cancer.

Seattle Cancer Care Alliance (SCCA) offers comprehensive treatment for this disease from a team of experts.

What is esophageal cancer?

Esophageal cancer occurs when cells in the esophagus begin to grow abnormally.

They do not respond to regular cell growth, division and death signals like they are supposed to. They also don’t organize normally.

Instead they grow into a tumor, which may extend into the open space inside your esophagus or break through underlying layers of your esophageal wall.

Usually esophageal cancer starts in the squamous cells or glandular epithelial cells that line the esophagus. From there, cancer may spread into the esophageal wall and to nearby lymph nodes or other tissues or organs.

In the U.S., adenocarcinoma is more common than squamous cell carcinoma in the esophagus. The reverse is true in the rest of the world.

Esophageal cancer can be difficult to detect early on because it may not cause noticeable symptoms until a tumor gets big enough to interfere with swallowing.

See your doctor if you:

Difficulty swallowing may start with foods like meat, bread or raw vegetables, but as a tumor grows, even liquids may be painful to swallow.

Other early warning signs may result from a variety of medical issues. See your doctor if you experience any of these other potential signs for a prolonged period:

After your doctor has given you a thorough exam, you may need several tests to help diagnose esophageal cancer.

Endoscopy, including endoscopic ultrasound, gives the best information about the structure of your esophagus. It shows complications of reflux, such as esophagitis (irritation of the esophagus), and tissues that may have cancer. For this test:

If you have a small, early-stage cancer that has not gone deeper than the lining of your esophagus, your doctor may be able to remove all of it during your endoscopy (endoscopic mucosal resection).

If your doctor finds cancer or believes you may have cancer, you will likely have imaging tests to better understand your cancer and tell whether it has spread beyond your esophagus. These may include a computed tomography (CT) scan or positron emission tomography (PET) scan.

Your doctor may ask you to have a complete blood count to check the level of each type of blood cell in your bloodstream. Low red blood cells (anemia) may be a sign of internal bleeding, which sometimes happens with esophageal cancer (as well as other conditions).

The treatment that your doctors recommend for esophageal cancer will be based in part on the stage of your cancer. The stage depends on:

There are different staging systems for adenocarcinoma and squamous cell carcinoma of the esophagus. Both systems use Roman numerals I, II, III and IV, with stage I being the least advanced and stage IV being the most advanced stage.

These factors may affect your risk for esophageal cancer:

When acid from the stomach repeatedly comes up into the esophagus — as it does in GERD — the acid may damage the cells of the esophageal lining. Over time this damage can cause the cells to mutate and become more like cells in the stomach and intestine, leading to a condition called Barrett’s esophagus.

In a small fraction of people, the mutated cells turn into cancer (esophageal adenocarcinoma).

Several options, including lifestyle changes, medication, radiofrequency ablation and surgery, are available to control reflux and to prevent or treat the problems that can develop as a result of reflux.

Read more about Barrett’s esophagus and treatment options for this condition at the UW Medicine Center for Esophageal & Gastric Surgery.

How common is esophageal cancer?

About 17,000 people are diagnosed with esophageal cancer in the United States each year. 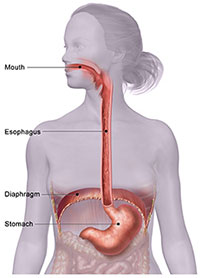 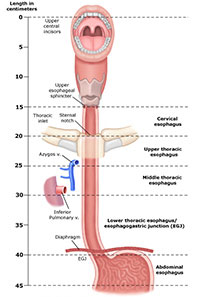