The goal of treating leukemia is to put the disease into complete remission—with no trace of leukemia in your body and a return to good health. If you have leukemia, where you choose to go for initial treatment has a significant impact on the likelihood of survival.

Leukemia patients at Seattle Cancer Care Alliance (SCCA) have access to advanced therapies and treatments being explored in one or more of the 50 ongoing leukemia research studies conducted at two of SCCA’s founding organizations, Fred Hutch and UW Medicine. For leukemia patients who require a bone marrow transplant, the Fred Hutch Transplant Program at SCCA is the most experienced transplant center in the world. As you can see below, patients treated for leukemia at SCCA have high five-year survival rates.

The chart below shows the five-year survival rates for leukemia patients treated by SCCA compared to patients who were treated for leukemia elsewhere. This information was collected by the National Cancer Data Base (NCDB) for patients diagnosed between 2003 and 2006 and followed for five years. 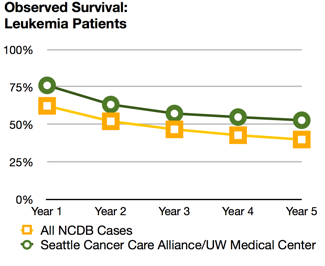 The charts above include patients who were diagnosed between 2003 and 2006 and then followed for five years. The five-year observed survival rates are estimated using the actuarial method with one-month intervals. The endpoint is death from any cause (not cancer specific death); patients may have died from causes unrelated to their cancer. Calculations were performed using the NCDB Survival Reports software tool. Survival rates are not displayed when fewer than 30 cases are available, as survival rates calculated from small numbers of cases can yield misleading results and may have very wide confidence intervals.

The outcomes presented in the figures are not risk-adjusted. That is, the NCDB did not account for demographic differences (e.g., age at diagnosis, gender, socioeconomic status, and insurance status), prognostic factors, and comorbidities for SCCA and other hospitals. Also, the NCDB did not account for subjective differences in staging practices among hospitals. For example, it is possible that a cancer considered stage I at one hospital might be considered stage II at another hospital due to practice pattern variations. The outcomes comparisons presented here might have differed if the NCDB had accounted for such demographic and staging differences in our analyses.

The NCDB tracks the outcomes of 70 percent of all newly diagnosed cancer in the United States from more than 1,500 commission-accredited cancer programs. It has been collecting data from hospital cancer registries since 1989 and now has almost 30 million records.