'You can still swim': SCCA helps a bladder cancer patient and synchronized swimmer get back in the pool 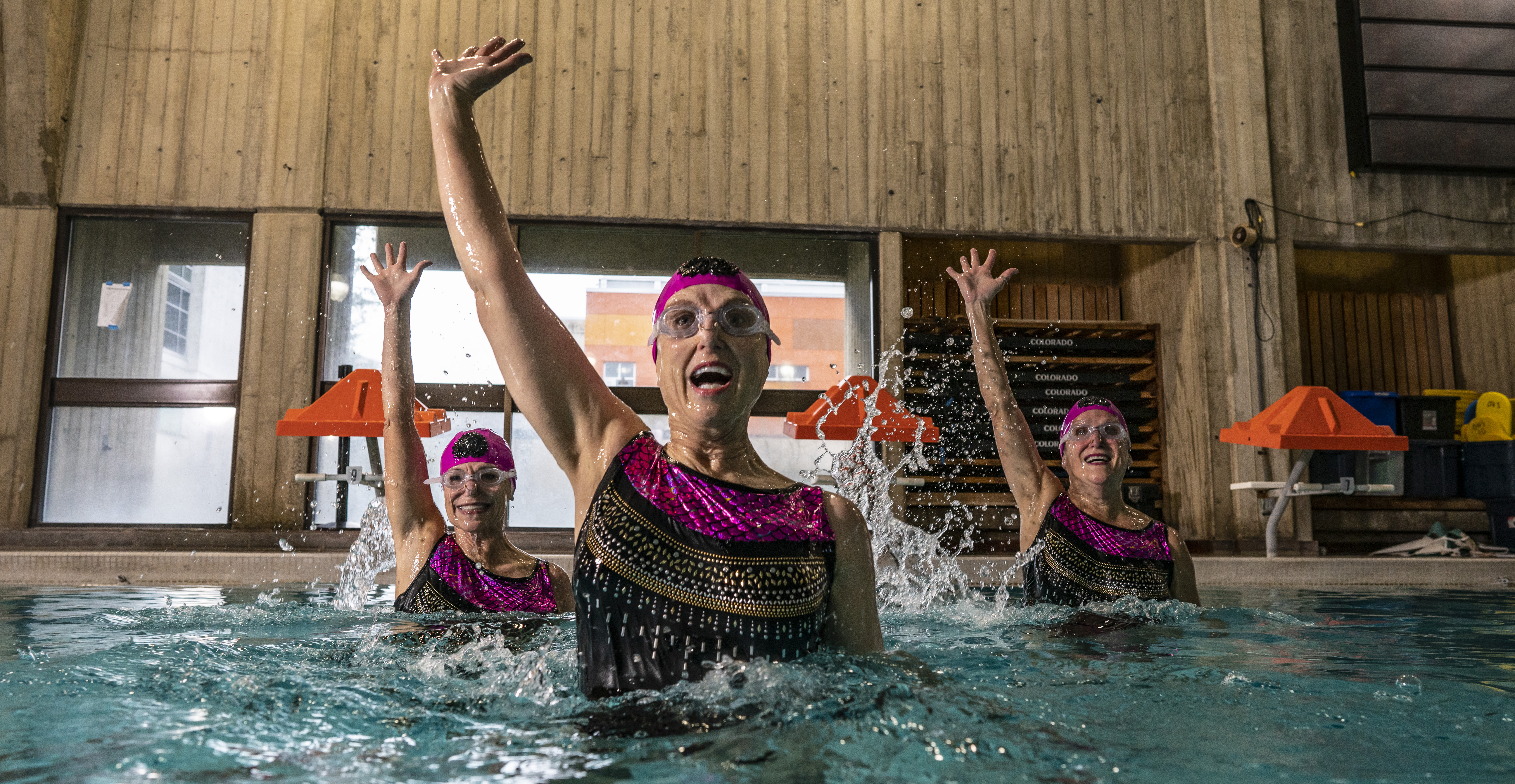 In 2011 when Terrie Asplund retired after 35 years teaching mostly first grade, she heard about a synchronized swimming team in Olympia. Asplund, 66, swam competitively growing up. She decided to try out for the all-women team, and she made it.

Shortly after, Asplund was diagnosed with breast cancer. Throughout her treatment, her teammates and coach cheered her on. Once it ended, she says, “swimming really helped me get back to where I felt normal and strong again.”

In 2018, she was diagnosed with cancer again, this time in her bladder. A local urologist in Puyallup, where she lives, told her she’d have to have her bladder removed and give up the sport she loves. Asplund was determined to prove him wrong.

In the fall of 2018, she came to Seattle for a second opinion. “The first thing out of my mouth was, ‘Save my bladder. I’m a swimmer,’” she says.

Her oncologist, Dr. Brian Winters, looked at her, puzzled, and reassured her that she wouldn’t need to give up swimming. “He was calm and patient and explained that as far as he was concerned, swimming would not be an issue,” she says. “He knew I was terrified, and he listened to me. He looked at me with big, wide eyes and said, ‘You can still swim.’”

Dr. Winters, a urologic oncology fellow now at Kaiser Permanente, remembers that conversation well. Asplund was very nervous, but he reassured her. “She was told she wouldn’t be able to continue doing what she loves,” says Dr. Winters. “We were very upfront and said: ‘You can do all these things.’”

Asplund was in the hospital for seven days after undergoing an extensive surgery involving removal and reconstruction of her urinary system. Dr. Winters, along with SCCA’s bladder cancer specialist Dr. Jonathan Wright, removed Asplund’s bladder and lymph nodes, then fashioned an ileal conduit, a mechanism for urine to drain, connecting her ureters – the thin tubes that carry urine from the kidneys to the bladder – to a short portion of her small intestine that had been diverted to an opening created on her abdomen. Urine drains into a bag, which Asplund changes regularly.

In the weeks leading up to the surgery, Asplund had begun buying ponchos and long, oversized tops to conceal the bag. But her care team at SCCA reassured her that the shopping spree was unnecessary; she could still wear fitted clothing and belted tops. Asplund was relieved to find out that was true.

“The bag was really easy to get used to,” says Asplund. “It takes two minutes to change and sticks on through showers and swimming for 1 ½ hours. Then it just peels off when I need to change it.”

After she gets out of the pool, the bag typically has filled a bit. She covers it with a towel, but in truth, she’s pretty bold about living bladder-free. “I had a bilateral mastectomy after I had breast cancer in 2011,” says Asplund. “I think I surprised Dr. Winters a little bit because I said, ‘Bring it on. Just think what a badass old lady I’m going to look like in the locker room.’”

Dr. Winters confirmed Asplund’s suspicion: “She’s a gamer. When we told her what to expect, she said, ‘Let’s do it.’”

Bladder cancer is the fifth most common cancer in the U.S., striking men more often than women. Bladder cancer is often diagnosed at a more advanced stage in women, in large part due to a delay in diagnosis. Seeing blood in your urine is a warning sign that should prompt a call to your doctor. “Unfortunately, women with bladder cancer are often misdiagnosed initially with a bladder infection as the cause of the blood in the urine,” says Dr. Wright. “They may be treated with several rounds of antibiotics before having the blood in the urine evaluated thoroughly.  As a result of such a delay, an underlying bladder cancer can grow.”

About 30 percent of bladder cancer patients need their bladders removed.

“Terrie really illustrates the complete journey of a major cancer: struggling with a diagnosis that has limited options, wondering, ‘How am I going to live with this?’” says Dr. Wright. “We bring together a multidisciplinary team to help patients through this because we are talking about life-altering things.”

It’s been a little more than a year since her bladder was removed, and Asplund is swimming again. “Seeing her on the other side, back in the pool, is really powerful,” says Dr. Wright.

Asplund had watched synchronized swimmers on television, cutting gracefully through the water as they competed in the Olympics. But she’d never thought about participating until a friend encouraged her to join the team. She considers the sport the perfect workout for her body and her brain. “It’s hard work,” she says. “You have to remember the routine, use proper technique, keep a steady beat to the music and pay attention to how close you are to your teammates. It makes your brain work really hard.”

Asplund and the rest of her team practice their swimming routine at the Olympia YMCA. Her team – two other women in their sixties and two in their seventies, plus their thirtysomething coach – practices twice a week, gearing up for Nationals, which is held each October.

They traveled last fall to Mississippi. Asplund’s team placed second in the 60- to 70-year-old age bracket.  And she got a third-place medal in individual figures, which assesses a swimmer’s skill at moves including a ballet leg, an inverted single straight leg, or a flamingo kipnus, which resembles an upside-down flamingo’s stance.

Odds are that Asplund was the only swimmer missing a bladder at Nationals. But, she notes gleefully, the bag is inconspicuous, even in her swimsuit. “You can’t tell!” says Asplund.