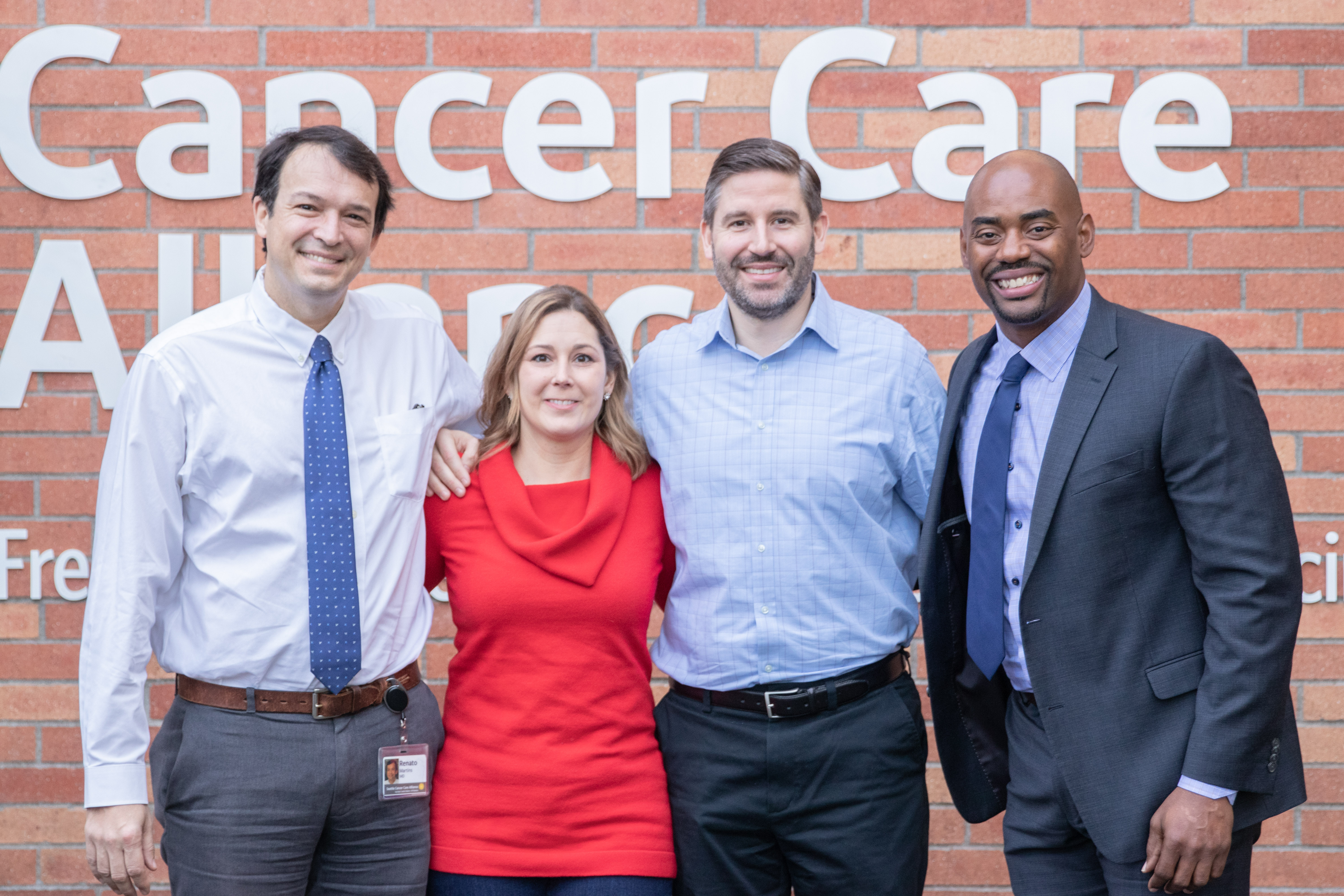 Last year, shortly after she was diagnosed, she learned about the Lung Cancer Survivors Super Bowl Challenge. The challenge asks people to raise money for lung cancer research and to raise awareness of the fact that you don’t need to have smoked to get the disease. The most successful fundraiser wins a trip to the Super Bowl. Downs didn’t smoke, but here she was, 42 years old, a wife and mother to a young son and daughter, a nurse anesthetist, a double black diamond skier, a football fan — and a lung cancer patient.

At the time, she was shocked by her diagnosis and not yet ready to embrace the role of activist. But her mindset steadily evolved, and in the summer of 2019, she reached out to Chris Draft, a former NFL player whose Team Draft is part of a family foundation that sponsors the challenge.

After playing for seven teams, Draft has left the gridiron behind. He’s now tackling lung cancer, helping find and fund more options to treat the disease. He has a deeply personal connection. It was 2010 when his girlfriend, Keasha, 37, experienced some shortness of breath. At the time, she was training for a 10K run and doing P90X, an intense home exercise crosstraining program. Then an X-ray found lung cancer. And Keasha and Draft found out an important truth about this disease: anyone can get it.

When they got married in Nov. 2011, Keasha had a thought: “What if we don’t get presents and we ask for donations for lung cancer research?” That’s when the fundraising began in earnest. Keasha died a month later, but Draft made a commitment to spread the word far and wide that lung cancer can strike anyone and that research can make a difference in survival rates for everyone, regardless of whether they smoked. It wasn’t easy. He felt he was fighting an uphill battle because lung cancer was seen — still is, in many cases — as a smoker’s disease, with all its accompanying stigma.

To counter that perception, he knew he had to go big. As a former football player, the Super Bowl seemed like the perfect opportunity to get his message out. “If awareness is the problem with lung cancer, here is the biggest platform in America,” he said.

When anyone afflicted by lung cancer shares their diagnosis, the first thing they hear is, ‘How much did you smoke?’
Dr. Renato Martins

Downs loves football. She happily recalls attending the 2014 Super Bowl, where the Seahawks crushed the Broncos. Downs has raised more than $46,000 for the Team Draft challenge, making her the top fundraiser and winning her and her husband, Jake, another trip to the Super Bowl. It’s not all fun and game(s): There’s work to be done.

Downs and her husband left Tuesday for Florida, where Downs is ready to sub in for Draft as he plays in the Wounded Warrior Amputee Football Team’s match against former NFL players on Wednesday. The game will have special meaning for Downs, a retired Lt. Col. who spent 13 years on active duty and deployed to Iraq in 2006-2007.

Downs is continuing to fundraise through the day of the Super Bowl. Ninety percent of her total will go to Seattle Cancer Care Alliance (SCCA), where she’s being treated. The balance will go to Draft’s foundation. There’s considerable work to be done, says Dr. Renato Martins, Downs’ oncologist at SCCA. “If lung cancer among non-smokers represented a separate diagnosis, it would be the sixth most common cancer there is, period.”

“When anyone afflicted by lung cancer shares their diagnosis, the first thing they hear is, ‘How much did you smoke?’” says Dr. Martins. “Part of that is driven by an attempt to distance yourself from something scary. When you hear that the person didn’t smoke, you say, ‘Whoa, does that mean this could happen to me?’”

Even primary care providers may discount lung cancer as a possibility in non-smokers, said Dr. Martins, assuming it’s pneumonia and prescribing antibiotics. “Being the sixth most common cancer, it should come up pretty quickly,” says Dr. Martins.

The fact that it doesn’t highlights the need for more research. In 2004, Fred Hutchinson Cancer Research Center, affiliated with SCCA, had no lung cancer research program. Modest donations enabled Fred Hutch to qualify for a small number of grants, which helped build momentum. Today, Fred Hutch is one of a handful of lung cancer SPOREs nationwide, programs funded by the National Cancer Institute to fast-track research into the clinic, where patients can benefit. The Specialized Program of Research Excellence in Lung Cancer is worth $13 million over five years. Dr. Martins is the co-lead.

Research into lung cancer is critical. More than 228,000 new cases are expected to be diagnosed in the U.S. in 2020, according to the American Cancer Society.

Research has already changed the trajectory of Downs’ care. When Dr. Martins finished his training in 1998, one-year survival was considered good news. Now there are far more treatment options, including numerous clinical trials available at major academic cancer centers such as SCCA, and immunotherapy, which harnesses a patient’s own cells to fight cancer. “It’s a huge advantage to be treated at an academic center, where we have all the standard of care and all the research advances,” says Dr. Martins.

Downs can attest to that; the first time she met Dr. Martins, he showed her a picture of a patient who had brought in a cake to celebrate 10 years outliving lung cancer. “He said, ‘You’re going to be doing that too.’”

While in treatment, Downs has been able to continue living life as usual for the most part. "I hear a lot that I don't look sick," says Downs. "With these new medications, you can live a normal life." Case in point: Last summer, she and her husband took their kids, ages 9 and 11, on a two-week trip to Europe.

“Angie has heard me say this before: People want to know how long am I going to live with this?” says Dr. Martins. “My answer is that I have no idea because if I can keep things under control for two to three years, who knows what I will have to offer you next?”