For women healing from breast cancer surgery, there may be no one who understands their state of mind better than Karen Bierwagen, the lead mastectomy fitter at Shine, the retail store in South Lake Union operated by Seattle Cancer Care Alliance.

For women healing from breast cancer surgery, there may be no one who understands their state of mind better than Karen Bierwagen, the lead mastectomy fitter at Shine, the retail store in South Lake Union operated by Seattle Cancer Care Alliance.

Part problem-solver, part fashion consultant, Bierwagen serves as a guide to life after cancer. She shows women what a breast prosthesis looks and feels like (firm yet squishy and surprisingly light or heavy, depending on the cup size) and guides them through a selection of specialized bras and compression products. She talks to them about their options. Are they having a single mastectomy without reconstruction? If so, they’re looking at silicone breast prostheses to restore symmetry and balance out the weight of their remaining breast. Are they undergoing a bilateral mastectomy without reconstruction? In that case, there are more options as a woman can go as big or small as she wants without concerning herself about matching the size of an existing breast. About half the women whom Bierwagen fits have opted to forgo reconstruction.

Bierwagen often initially meets with women shortly after their diagnosis, when their minds are overflowing with questions about what comes next and how they will look following surgery. She sees them next after surgery, when she discusses how their surgery went and how their healing is going.

“As each issue comes up with their healing process, there’s a solution for it,” says Bierwagen. 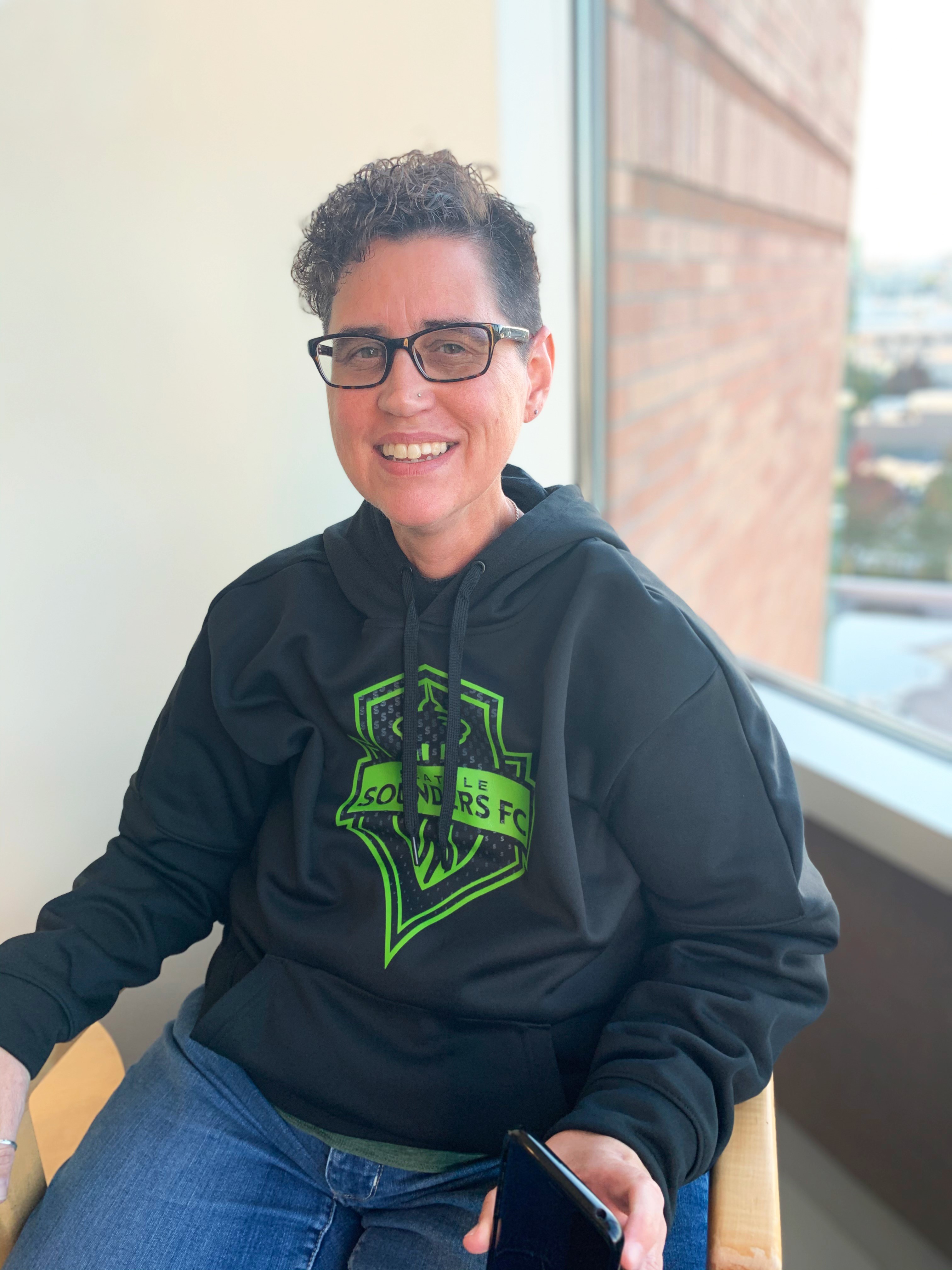 Lisa, a patient at SCCA, came to Shine for a mastectomy fitting.

Before Lisa, a legal messenger who lives in Seattle, had a prophylactic mastectomy last year, she came to see Bierwagen to be fitted for a camisole that zipped in front and had pockets for her drain tubes. A lymphoma survivor, Lisa, who asked that only her first name be used, was at high risk of developing breast cancer due to the radiation she had received decades earlier. She opted to preventively remove her breasts and decided against reconstruction, so a few months after her surgery, she returned to Shine for a mastectomy fitting. “To go and be fitted by an amazing woman who has compassion for women with breast cancer and knows what we are going through was so reassuring,” she says.

Bierwagen fitted her for two different prostheses; the forms amazed Lisa with their realistic feel. “They feel real and they look real,” she says. “When you put them in a bra and put a shirt on, you can’t even tell. I couldn’t believe it.”

Bierwagen first learned the art of mastectomy fittings nearly 30 years ago, when she worked in the lingerie department at Nordstrom. She’s been a national fit specialist for a luxury bra manufacturer, spending time at Harrod’s department store in London and Neiman Marcus and Saks Fifth Avenue doing fittings. “I feel like everything I did trained me for this job,” she says.

In order to be allowed to bill Medicare, fitters at Shine must be accredited so Bierwagen received certification in 2013 before she began working at SCCA’s retail boutique, which combines jewelry, books and one-of-a-kind gifts with a comprehensive offering of products and services geared to people with cancer: hats, wigs, clothing, compression stockings and breast prostheses, as well as complimentary haircuts and wig trims.

Mastectomy products can be expensive. Bras range from $37 to $72 and prostheses cost $135 to $284. Many insurance providers and Medicare typically cover these costs in full, but Shine recommends confirming coverage before purchasing. “We encourage patients to find out their eligibility in order to make an informed decision,” says Eileen Hood, one of Shine’s managers.

Shine doesn’t bill insurance directly; the store provides a detailed receipt that patients can submit to their insurance providers. Women do not need to be SCCA patients to book a fitting at Shine, although about 60 percent do receive their cancer care at SCCA.

For patients who can’t afford the products, SCCA has a Patient Assistance Fund. Interested customers must submit a one-page application and proof of income, which is evaluated for approval. 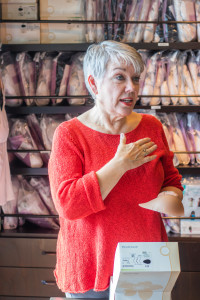 Adjusting to a reshaped silhouette can be challenging. Every fitting is unique. Some women may come in because they’ve had complications with their implants. Some women who have had reconstruction may book an appointment because they’ve gained or lost weight and need a special prosthesis called a balance form to restore symmetry. Women who’ve had partial mastectomies may need a prosthesis to fill in a missing quadrant. Other women may rush in post-surgery in a panic. “You figure out what each woman needs and how to supply it,” says Bierwagen.

A handful of other locations also fit women post-mastectomy, but Bierwagen notes that Shine’s nonprofit status takes the pressure off customers. It’s not uncommon for her to spend 90 minutes doing making sure that a bra and the prostheses inside fit correctly. “A fitting takes as long as it needs to,” she says. “I work with a woman until she feels, This is it.”

Erica Karlovits, who oversees retail operations for SCCA, said that Shine’s combination of product selection, patient education and service sets it apart from the handful of retail stores that also do mastectomy fittings. And then there’s the value that Bierwagen adds to the experience. “There is no problem she can’t find a solution to. She is not going to take an off-the-rack bra and say this is going to work for every body and every person. She makes sure that every patient feels comfortable and empowered when they walk out that door.”

Bierwagen’s talent lies in her briskly efficient but warm and good-natured approach to her job. Mastectomy fittings aren’t her only responsibility; she also works the sales floor and fits compression stockings. On a recent weekday, she helped a patient who had recently been discharged from the hospital find the right pair. “Can I look at your ankles?” she asked the man, who leaned heavily on a walker. “I hate to be fresh,” she added as she pulled up his pant leg.

Becoming a certified mastectomy fitter — Shine has three — involves serving an apprenticeship, attending a class to learn about prostheses and taking a certification exam.

But perhaps the most important skill is one that can’t be taught: empathy.

“Every woman is different,” says Bierwagen. “As a bra fitter, I may look at them and think, ‘That bra does not fit.’ But it’s their body and their decision about what they want to wear.”