In the waiting room at SCCA, Seattle’s mayor has a ‘connective moment with humanity’

When Seattle Mayor Jenny Durkan was newly diagnosed with melanoma in January, her surgical oncologist acknowledged the delicate and difficult nature of having cancer and being the public face of the Emerald City. 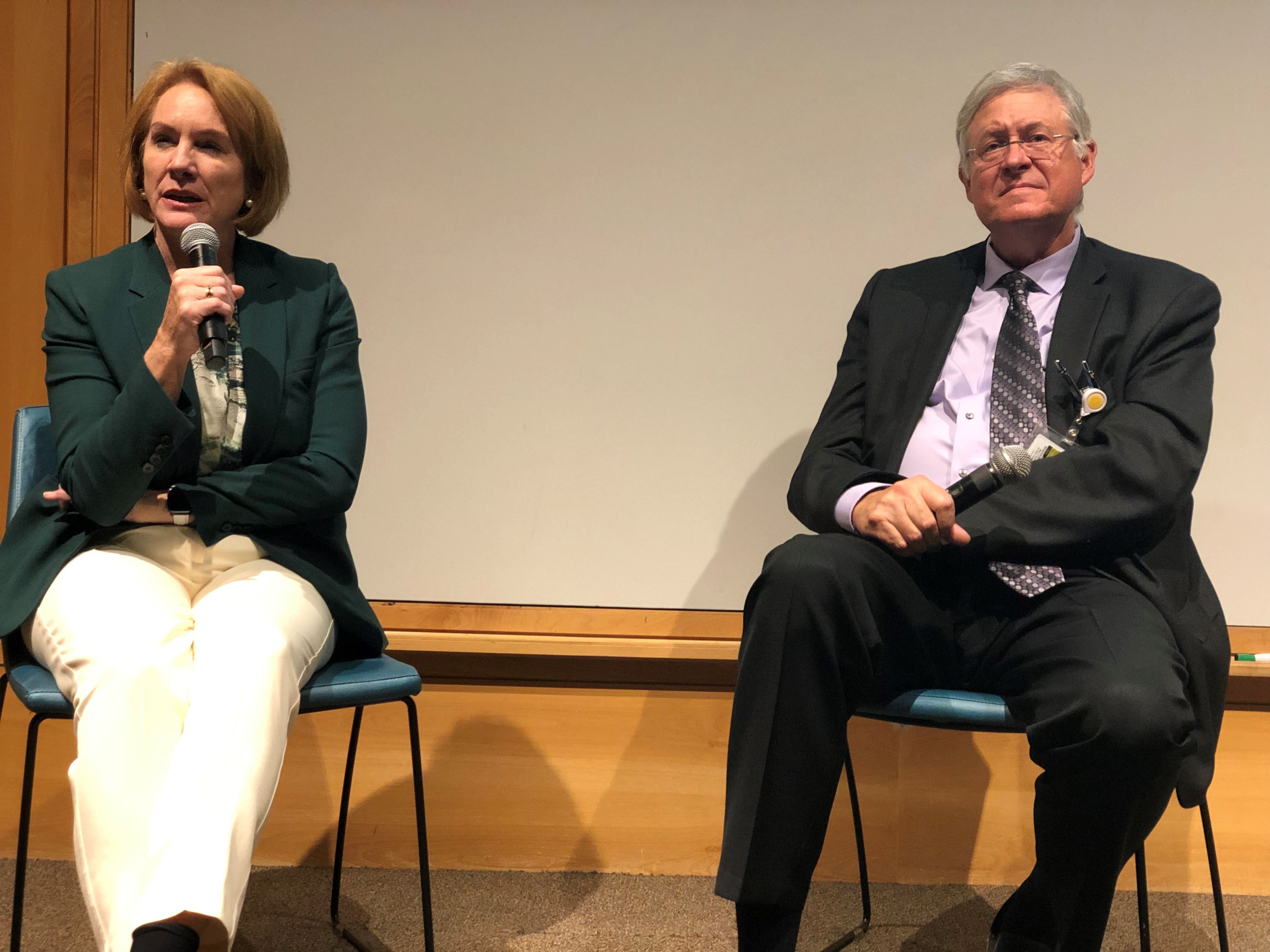 When Seattle Mayor Jenny Durkan was newly diagnosed with melanoma in January, her surgical oncologist acknowledged the delicate and difficult nature of having cancer and being the public face of the Emerald City.

“You can enter Seattle Cancer Care Alliance through the side door,” Dr. David Byrd, director of surgery at SCCA, told Durkan. “Next thing I know, she is in the waiting room waiting for her turn.”

That decision to sit among patients, many of whom were likely her constituents, was pivotal for Durkan, who observed “every age, every race, every configuration of person sitting in that waiting room. We were all the same. For me, it was an enormously connective moment with humanity.”

Durkan shared her experience being treated for melanoma at SCCA at the Northwest Melanoma Symposium on Sept. 7 and in an interview with SCCA afterward. In a casual Q&A format at the symposium, Dr. Byrd asked Durkan about her experience and she answered candidly, expressing gratitude for the care she received and offering insight into how she coped with learning she had a serious skin cancer at the same time that the city was dealing with two major events: the decommissioning of the viaduct, resulting in major reroutes of traffic patterns, and Snowmageddon, a snowstorm that closed or delayed schools for a week and shut down much of the city – but not SCCA, where employees hiked and biked through mounds of snow to get to work.

Durkan connected with patients in the audience as she shared what it was like to receive the phone call from her dermatologist confirming her diagnosis. “Time just stops and the world telescopes into that moment,” she said. “Everything goes through your mind at once: fear, anger, anxiety, a million questions, what does it mean, it can’t be me. Like everyone in this room, you fear the worst.”

Durkan’s situation was compounded by the unique nature of her job. “It’s hard for the mayor to just kind of disappear,” said Durkan. “When you’re going through something so personal and you are so mad and so scared and so angry and then you have to put a public face on, it’s hard.”

But Durkan said she felt a responsibility to be open about her diagnosis. “It’s really important to show how cancer can touch any life, any time,” she said. “How we deal with it is one of the few things we can control. There’s nothing shameful in having cancer.”

Durkan’s melanoma was removed from her knee, which required her to wear a knee brace after the surgery. Rather than spark rumors, Durkan decided to be honest and forthright about her diagnosis. She shared her news publicly after she told her sons, one of whom just started college; the other recently graduated. That decision was made easier by her prognosis, which was hopeful because Dr. Byrd had completely removed the cancer.

Durkan emphasized the importance of choosing a doctor and care team that you trust. At SCCA, Durkan said the quality of care is “as good or better than any place you can get [care]. They are treating the whole patient. They are making sure they get the absolute best care.”

She expressed appreciation for SCCA’s team-based approach, which surrounds a patient with doctors, nurses, social workers and other supportive care services. “If I had questions, I didn’t have to try to see if I could get on the doctor’s schedule for a callback,” she said. “I could call the nurses and they knew exactly what to do.”

A “true believer” in getting multiple opinions, Durkan had put out feelers and talked to friends in the medical community after her diagnosis. They recommended SCCA. “I felt I had the right medical team in place so I said, ‘You got this. Tell me when I need to worry more.’” Durkan had done her homework ahead of time and suspected she would need a sentinel node biopsy to see if her cancer had spread beyond the primary site. “There’s no one better than Dr. Byrd to do that here,” she said.

Dr. Byrd has, in fact, amassed a great deal of experience. He was the only local surgical oncologist trained in performing sentinel node biopsies when he arrived at the University of Washington in 1992.  “I was the only one doing it north of L.A. at the time,” said Dr. Byrd, who praised Durkan as a “very good patient.”

Dr. Byrd tends to start off a conversation with a new patient by asking their goals for the visit as well as their goals for treatment. “Usually they’re a little surprised because they’re not used to this question, let alone from a surgeon,” he said. When he posed those questions to Durkan, she responded with self-assurance. “She said, ‘I know it’s melanoma, I don’t know how serious it is, I’d like to know as soon as possible, and let me know what to do and I’ll do it.’ So that’s what we did.”

Immersed in both research and clinical medicine, doctors at SCCA are used to being called on to treat celebrity patients. But Dr. Byrd stressed that the care that every patient receives is exactly the same. “I treat everyone the same medically because that’s where you get the best results,” he said. “I treat people the same way I’d want myself or my family treated.  I make sure they know that this is brand-new for them, but this is not brand-new for us. We do this all day long.”

Durkan also took the opportunity to emphasize that people in the Pacific Northwest need to protect themselves from the sun – even when they can’t see it. Durkan had basal cell carcinomas, a less serious skin cancer than melanoma, removed before she was diagnosed with melanoma; her red hair and fair complexion make her more prone to developing skin cancer. “It’s important to wear sunblock even in winter,” she said.

Dr. Byrd recommends sunscreen with an SPF of 30 or greater applied with particular attention to areas that people often forget such as the ears and the back of the neck. And he cautions: stay far away from tanning booths.

In the last decade, significant progress has been made in the treatment of melanoma. “Immunotherapy is the hottest thing,” he said. “Up until 2011, we had almost nothing to offer patients with melanoma that had spread. Now we have multiple drugs that are highly effective in a large number of patients, so there is an extra layer of hope.”

That optimism is reflected in Durkan’s experience with cancer. “We are really making such remarkable progress,” she said. “I’m really fortunate that I got diagnosed with this disease in Seattle. I’ve got the best people in America, right here in Seattle, taking care of me.” 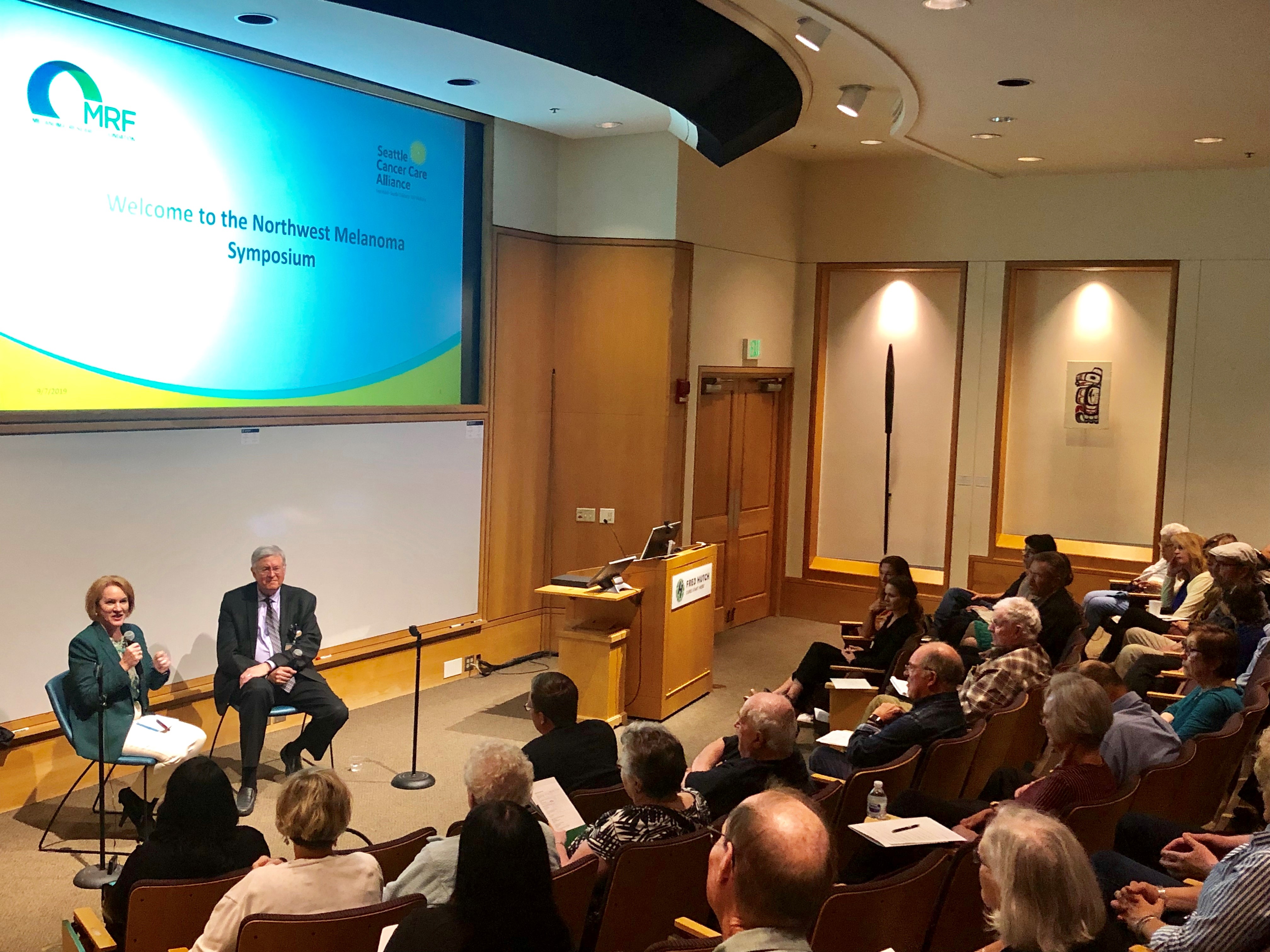 Mayor Durkan and Dr. Byrd at the Northwest Melanoma Symposium