Lisa Newell knows she’s an outlier. It’s been more than 13 years since she was diagnosed with stage 4 breast cancer, just five months after giving birth to her third son.

Her middle son, Sammy, was 2 when she was diagnosed. Now 15, he has his learner’s permit. This week, as Newell took him out driving, she asked him: “Did you ever know what my prognosis was when you were little?”

“Five years,” she told him. 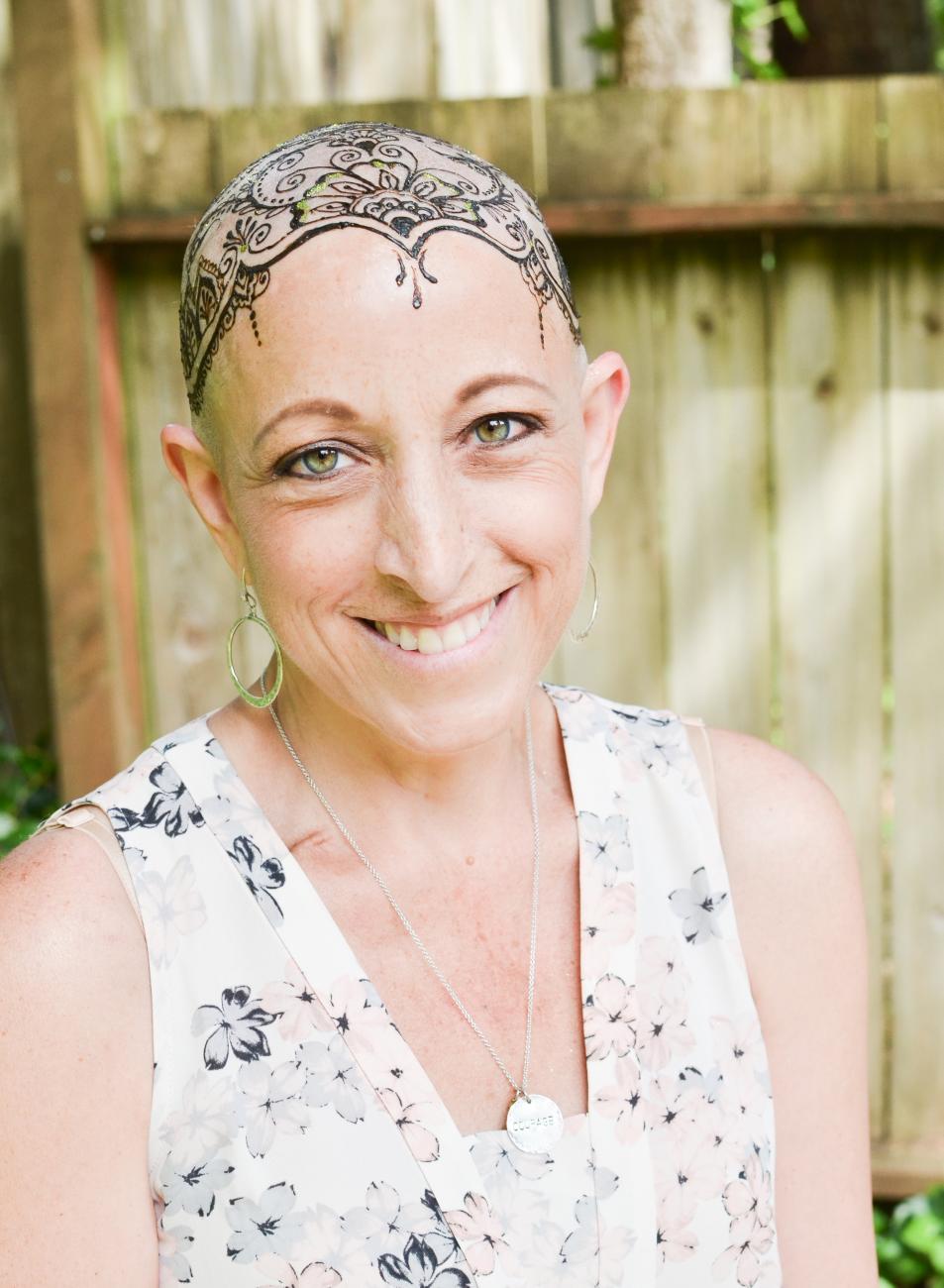 Lisa Newell after getting her head decorated with henna in 2015.

Taking care of Sammy and his baby brother, Joey, and older brother, Eli, are what helped Newell make it through the worst parts of treatment. She didn’t allow herself to go to scary places in her head. She had no time for that. “They still needed mommy to cook dinner and do their stuff,” she says. “They kept me grounded.”

Newell’s cancer has returned twice, but she’s been cancer-free since 2011. Or maybe it was 2010. She doesn’t remember. Although dates of diagnosis and remission are seared into the brains of many patients, Newell doesn’t keep track in her head. “It happens when it happens and when it doesn’t, it doesn’t,” says Newell, who is 53. “I’m just living my life.”

Dr. Jennifer Specht, Newell’s doctor at Seattle Cancer Care Alliance, has helped reinforce that attitude. “No one is a textbook case,” Newell recalls Dr. Specht telling her husband after he had inquired about his wife’s life expectancy. “That is not how we treat people.”

Three years ago, Dr. Specht and some of Newell’s infusion nurses attended Newell’s 50th birthday party, a significant milestone considering that she was diagnosed a month before she turned 40. “She’s lived with stage 4 breast cancer longer than many women do and you wouldn’t know it by looking at her or talking with her,” says Dr. Specht, a breast medical oncologist. “She manages to keep the cancer in its place. It’s just part of her life.”

Along the way, she has become somewhat of a de facto breast cancer point person for newly diagnosed women who live near her in North Bend. She’s raised money for the American Cancer Society, and she started a support group not long after she was diagnosed. She’s found that other people with cancer often are better equipped to provide support than family members, who can be too emotionally involved.

“Sometimes, you need people to listen to you say, ‘I don’t think I’m going to make it,’ even if you don’t really believe that,” says Newell. “I can’t say that to my husband because he would try to reassure me. Other women get it. They just listen and understand that sometimes you feel bad and you need to talk about it.”

But Newell hasn’t met many women with stage 4, or metastatic, breast cancer. That’s about to change on Sept. 7, when she attends her first Northwest Metastatic Breast Cancer Conference. The free day-long seminar is held at the Amazon Meeting Center in downtown Seattle. Metastatic breast cancer doesn’t receive nearly as much attention or research funding as early-stage breast cancer.

Lynda Weatherby, one of the conference’s co-organizers, was diagnosed with early stage breast cancer that recurred 12 years later. “My perspective is there is so much pink, but we haven’t zeroed in on the part of breast cancer that kills people,” Weatherby said last year in a profile of her and her other co-organizer, Teri Pollastro. “Metastatic cancer is the hardest piece of the puzzle to solve.”

This is the conference’s fourth year. The agenda includes panels, discussions and break-out sessions on treatments, clinical trials and patient support, as well as complimentary yoga and massage. Newell’s oncologist, Dr. Specht, will participate in a session about immunotherapy’s role in treating breast cancer.

Newell is hoping to learn more about metastatic disease and connect with like-minded women who don’t let cancer control their lives. Years ago, she watched an Oprah episode in which a young man who had faced his share of challenges wondered out loud: “Instead of saying why me?, I ask why not me?”

Or, as Newell puts it, “I don’t have time to dwell on what ifs.”