As a cancer researcher contends with lung cancer, immunotherapy plays a critical role

In 2012, Alan Herr, a cancer researcher, engaged in some macabre humor with his colleagues when he noticed his voice getting raspy and a gurgling sensation as he breathed. “That could be lung cancer,” he joked with his fellow scientists at the University of Washington, compressing air into his lungs then breathing out to show them the odd sound his breathing made.

“That doesn’t sound good,” they said.

Even though Herr studied cancer – or maybe because he studied cancer – Herr demurred. He decided he’d first book a visit with a primary care physician, but he didn’t have one. It took five months to find one and get in for an appointment.

That doctor didn’t think the gurgling and hoarseness portended anything serious, but he authorized a chest X-ray. Herr put it off for five weeks. “I think I really didn’t want to know the answer,” he said.

When he got the results, it looked like pneumonia. But Herr’s scientist mind was skeptical. He had no symptoms, no achiness, no fever.

“See a pulmonologist,” his father, a retired physician, said. 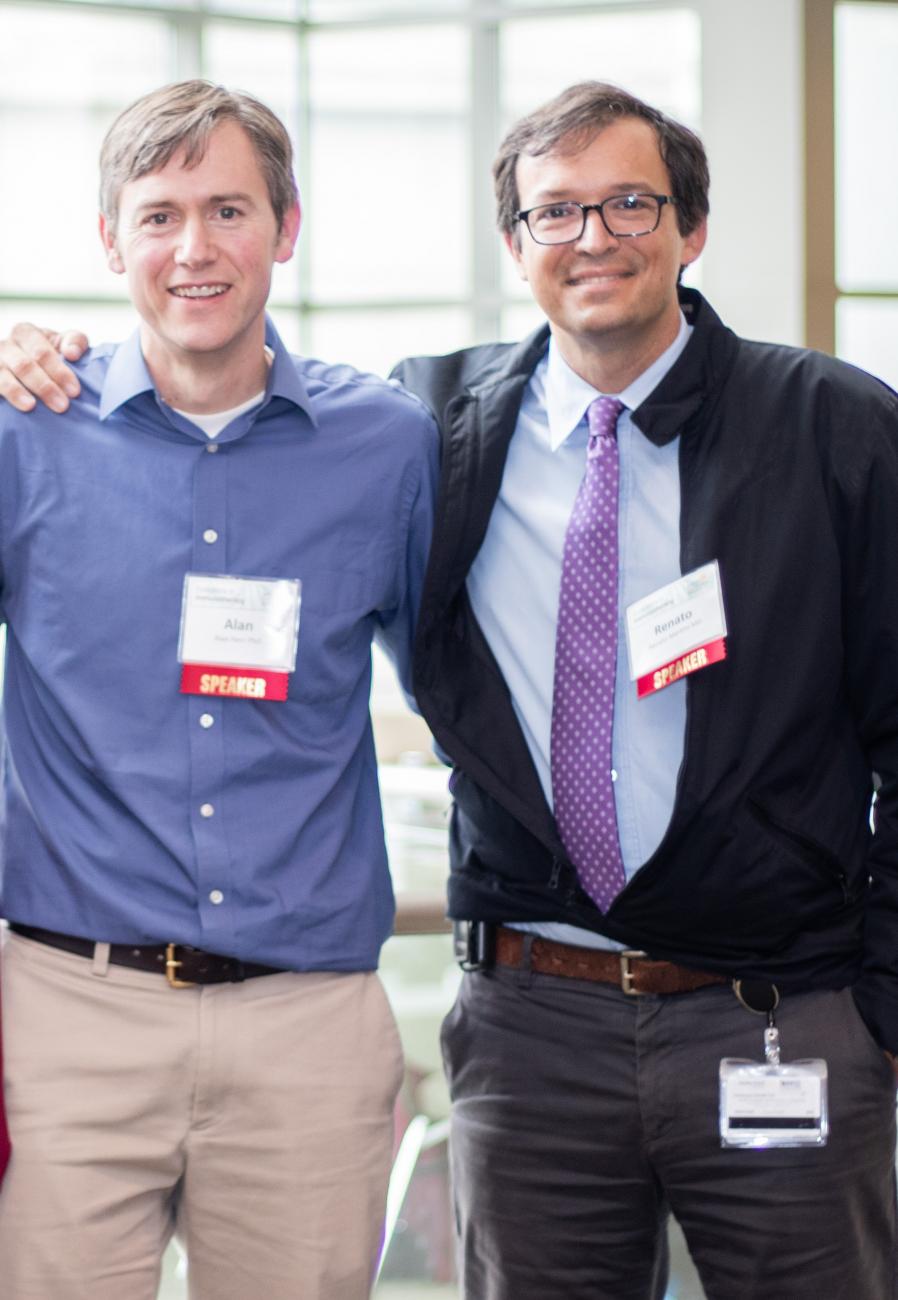 So he did.  A CT scan and biopsy showed Herr had non-small cell lung cancer. He was 43 and the father of three daughters.

Herr was referred to Dr. Renato Martins, a lung cancer specialist at Seattle Cancer Care Alliance (SCCA). In May 2013, Dr. Doug Wood operated to remove his upper right lobe. The cancer hadn’t spread to his lymph nodes, which made Herr think he was in the clear. But a year later, he had to start treatment, with multiple tumors in both lungs.

Based on the genetic profile of his cancer, Herr wasn’t a good candidate for targeted therapy, which uses drugs to home in on specific cancer-causing mutations.  That left standard chemotherapy.

Immunotherapy harnesses a patient’s own immune system to help fight cancer. The two primary types of immunotherapy, cellular immunotherapy and checkpoint inhibitors, are both represented in clinical trials offered at SCCA.

Considered cutting-edge therapy, immunotherapy’s potential generates so much excitement among hopeful patients and within the scientific community that Herr emphasized to audience members the importance of managing expectations. “Patients will come in with certain hopes of what immunotherapy might do,” Herr said. “It’s good to let them know that you’re going to try, but it’s an experiment, and we don’t know if it will work.” 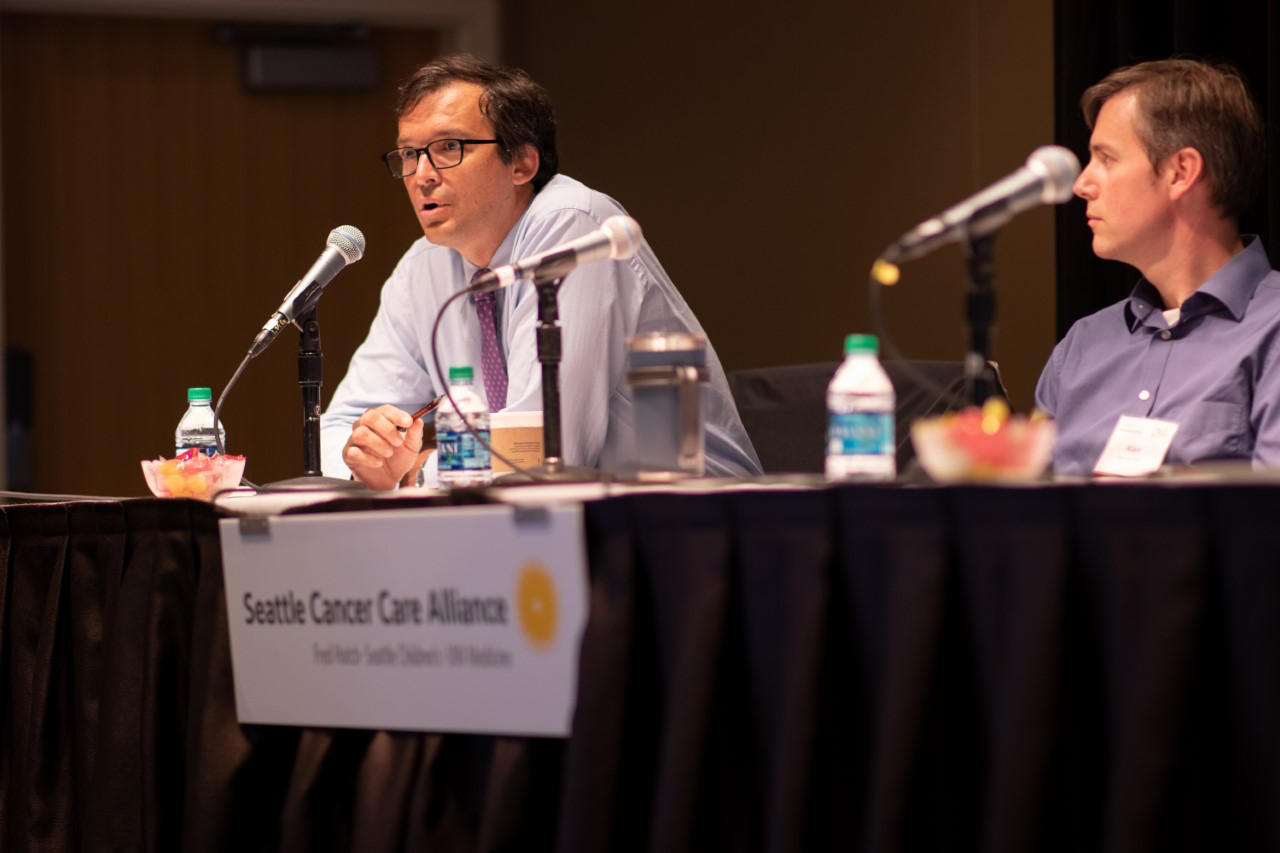 Herr spoke from personal experience. His first foray into immunotherapy, two years earlier, was unsuccessful. That regimen utilized PD1-checkpoint inhibition, which de-regulates cytotoxic T-cells that are part of the adaptive immune system – part of the overall immune system designed to eliminate pathogens. Lung cancer patients who typically have the most robust response tend to be smokers whose tumors have lots of mutations, and Herr was not a smoker. The experience left him feeling that this emerging protocol at the frontiers of cancer treatment may not work for him.

In the meantime, his day job as a cancer researcher studying how cells accumulate mutations was yielding fringe benefits. “Being a scientist and a patient is a huge blessing,” he said. “You’re acquainted with the biology and you’re trained to learn and think about things and read the literature. You’re surrounded by amazing colleagues. I’m comfortable sharing what’s going on with me, so I talked to people and they generously had all kinds of ideas.”

A friend offered to sequence his cancer genome to see if it revealed any gene alterations or targets that could prove useful in terms of treatment. “How many people know someone who will just sequence their genome?” he said.

Another colleague did some additional testing that showed Herr’s tumor had elevated levels of a protein called CD47, which functions as another immune checkpoint by telling macrophages, part of the body’s innate immune system that protects it from infection, “Don’t eat me.”

So, in August 2018, when a second immunotherapy trial became available that blocked CD47 in combination with PD1-checkpoint inhibition, Herr enrolled. After two months, his tumors had grown rapidly and he was ready to pull out of the trial. “It was unnerving,” he said.

But Dr. Martins persuaded him to give it a while longer. He suspected that Herr was undergoing a phenomenon known as “pseudo-progression” in which cancer progresses before it recedes.

Dr. Martins was right: By December, the tumors had begun to shrink. Now more than a year later, his disease appears stable. “That speaks to the relationship between Dr. Martins and I, the trust we have developed over the years.” Herr said. “We connect at a personal level. I don’t know if I’d be threatened or not by some patient constantly asking questions, but he is always so open to engaging with me. I’m grateful that I listened to him.”

The future of immunotherapy is unfolding, bringing with it dramatic changes in expectations for survival. Several years ago, said Dr. Martins, “if a patient of mine with advanced lung cancer had survived a year, I was pretty happy I had helped them. Now things are very different. What to hope for when I see someone with lung cancer, even with advanced disease, has changed completely. Science is moving very fast.”