In ‘Lasting Love,’ a mother with a terminal diagnosis uses words and pictures to comfort children

Caroline Wright had just submitted the manuscript for her third cookbook when she started to feel strange. She was headachy and spacy, finding it hard to focus. At age 32, she chalked it up to the exhaustion inherent in churning out the cookbook, overseeing a house remodel and mothering her two young boys, but when she continued to feel lost – sometimes she wouldn’t know where she was – she went to see her doctor. 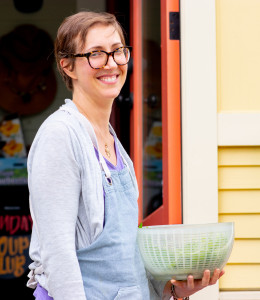 Caroline Wright had just submitted the manuscript for her third cookbook when she started to feel strange. She was headachy and spacy, finding it hard to focus. At age 32, she chalked it up to the exhaustion inherent in churning out the cookbook, overseeing a house remodel and mothering her two young boys, but when she continued to feel lost – sometimes she wouldn’t know where she was – she went to see her doctor.

Anxiety, most likely, the doctor said. Migraines could also be a possibility, a function of kids and work and other stressors. But when Wright told her doctor about a stabbing pain in the corner of her right eye, her doctor ordered an MRI – just in case.

The MRI took place before President’s Day weekend in 2017. When her doctor got the results, she called Wright immediately. “You have a giant brain tumor,” Wright heard her say. “I don’t want you to think I’m unprofessional, but I want you to connect with a neurosurgeon right away.”

The prognosis was bad. Glioblastoma, the same sort of cancer that had killed Sens. John Mccain and Ted Kennedy. Wright learned that the median survival rate is 12 to 14 months, although her tumor had a genetic variant that doesn’t respond well to chemotherapy. “It was more like 12 months,” she says.

Her writer’s brain – the same brain that was handicapped by an orange-sized tumor squatting on her motor cortex, which governs voluntary movements – started churning. Her sons were ages 1 and 3. For sure the 1-year-old wouldn’t remember her; the 3-year-old would have only gauzy memories. So she decided to do what writers do: she would write a book.

Wright was still fairly new to Seattle when she got sick. She and her husband, a government lawyer, had moved from Dallas less than two years earlier for a fresh start in a place with a welcoming community of artists and freelancers, which they found in the quirky Fremont neighborhood. They bought a house with a big-for-Seattle yard where Wright could plant arugula, zucchini and green beans and work on her cookbooks from her kitchen desk.

Now she put her cookbook work on hold, turning instead to a blog on CaringBridge, a website that allows patients to update family and friends on their condition. She chronicled the days surrounding her diagnosis, the weeks and months afterward, and decided to turn the blog posts into a self-published memoir. “I create things so creating a book for my kids wasn’t that unusual,” says Wright. “l wanted to leave them legacy material that would be useful for them, words that would be helpful for their consciousness. It made me able to mother them if I died.”

The memoir would offer a recounting of what had happened to Wright and dispense motherly advice. But how could she communicate that her love for her children would transcend her existence?

Wright spent a lot of time reading books for children with terminally ill parents as well as books geared toward the surviving parent about helping kids through their grief. “It was terrifying,” she says.

One night as she slept, she imagined a book with a simple, almost mystical plotline that crystallized what she hoped to convey: a parent is diagnosed with a terminal illness; the hospital discharges the parent with a magical creature who will serve as an enduring proxy for the parent’s love.

“Even if mommy’s body dies, my love for you stays,” says Wright, articulating the message of the book she called Everlasting Creature. “I’m still a part of your life even if my body isn’t there. You can bring me back to you any time you want. It’s very sad for other people to fathom, but it makes sense to me. That’s what this book does.”

Keenly aware that time is finite, Wright put her dream on paper, working quickly with a local artist, Willow Heath, whom she knew from her kids’ preschool. She sketched out the autobiographical story of a mother diagnosed with cancer whose young son notes that the magical creature that accompanied his mother home from the hospital is “strong, like the strongest part of her. The part that loves me so much.” The creature stays with the family while the mother cooks with her son and tucks him into bed, draws with him and reads books with him in bed.

“Our creature rests and grows stronger, even as Mama slips away.”

After his mother dies, the boy feels more alone than he has ever felt in his life. But the creature comforts him, doing the activities that his mother used to do with him.

“He never tries to cheer me up. He just keeps me company…Together, we still find beauty. Together, we find Mama everywhere.”

Wright self-published Everlasting Creature and spread the word, which ended up reaching organizational psychologist Adam Grant, who had co-authored with Sheryl Sandberg Option B: Facing Adversity, Building Resilience, and Finding Joy after Sandberg’s husband, Dave Goldberg, died unexpectedly in 2015. Grant was so impressed with the content that he shared it with his editor at Random House, which led to Everlasting Creature’s transformation into Lasting Love, to be published today by Random House Children’s Books.

The text and illustrations are mostly unchanged, leaving Wright’s message that a parent’s love is forever intact. But publication by Random House will ensure that the book has much wider distribution than the original version. That makes Wright happy because the book will reach more children, helping them cope with loss.

“When I was given a year to live and I was trying to wrap my head around committing to that narrative with my kids, I looked into all the children’s books that existed,” she says. “They’re either religious or metaphorical. We’re not talking in metaphors here; we’re being very clear about what’s happening. What’s happening is love.

“Love is a tangible thing, and that’s what we were teaching the kids, that we have this permanent connection,” she says. “I want my kids to feel the love I have for them, big and messy and crazy. After I die, I want them to know we loved each other, and I was a good mom, and I got taken too soon, and we still have this love for each other.”

Every cancer diagnosis is scary, but there’s something particularly unsettling about brain tumors that even oncologists recognize. “It’s different than other diagnoses,” says Dr. Lynne Taylor, Wright’s doctor, a neuro-oncologist at Seattle Cancer Care Alliance and co-director of the Alvord Brain Tumor Center at the University of Washington. “A brain tumor strikes at the heart of who you are as an individual. All our patients come to us with that realization. We talk about it a lot.”

That self-awareness can lead to intense conversations between doctors and patients. “Everything we do in the brain tumor world seems very heightened and crystallized. We’re forced to talk about things that really matter in life really early on,” says Dr. Taylor, who prides herself on getting to know her patients well.

“I explain to residents that you haven’t done an adequate social history unless you know the name of your patient’s dog,” says Dr. Taylor, who sees it as her responsibility to teach patients how to read and interpret their MRIs and help them anticipate the course of disease and what comes next.

“You really have to get to know a patient,” she says. When she asked Wright what gives meaning to her life, she talked about her writing. Dr. Taylor and her team signed up for Wright’s blog. They anticipated the children’s book she told them she planned to write.

After Everlasting Creature was published, Wright dropped a copy by Dr. Taylor’s clinic. “I called her after I read it and said, ‘You’re killing us,’” says Dr. Taylor. “She wrote this book that she thinks is happy but makes everyone else cry. Caroline is so willing to talk about these life-and-death things. She almost glows because she has dealt with it.”

Dr. Taylor became interested in neuro-oncology because of her fascination with how the brain works. The same type of cancer can have vastly different impacts on patients depending upon the location of a tumor, affecting speech, perhaps, or movement. There is also new awareness that glioblastomas such as Wright’s tumor are not all the same. They harbor molecular mutations that can alter a person’s prognosis. And new drug treatments are keeping the cancer at bay in some patients. Surgery, radiation and chemotherapy are all potential options, as is Optune, a medical device that looks like a swim cap concealing a number of electrodes that emit electric fields that slow down the process of cancer cells dividing and replicating. But even Optune increases median survival only by about six months.

When patients ask about glioblastoma recurrence, Dr. Taylor — who is also a board-certified palliative care physician — is honest. In her specialty, she regularly has to say goodbye to patients. Ninety-five percent of tumors return, she tells patients. But there are rare outliers, such as the patient she treated 20 years ago, whose photo adorns her office wall. In the picture, he is standing atop Mt. Rainier, arms raised in triumph against the glistening snow. “Those of us who have been doing this for a long time have patients we privately believe have been cured,” she says. “But that is a possibility for very few patients.”

Wright appreciates Dr. Taylor’s forthrightness. “We all love her so much that my parents would come to my appointments just to see her,” says Wright. “She’s like magic. Even when there was no hope to give me, anything she said gave me instant confidence.”

Wright is realistic about her the potential for recurrence, but she also believes there is reason to have hope. “I have been a tricky case since the beginning,” she says. “Nothing about my cancer was standard.” Glioblastomas most commonly occur in people between the ages of 75 and 84; Wright was in her early 30s when she was diagnosed.

“I’m just living my life until further notice,” she says.

She feels good and strong. She is planning to travel to promote Lasting Love, visiting a handful of cities to collaborate with organizations such as CaringBridge to contribute to conversations they are already having with their communities surrounding life, parenting, and death.

On a summer evening not long before Lasting Love was published, Wright sat with her older son, Henry, now 6, on an antique sofa in the living room, overlooking the raised bed where they’d harvested arugula for that night’s salad. They talked about what it means for love to last.

“Remember when Mommy would say life is kind of the same whether Mommy is here or not? Remember we talked about the invisible string?” says Wright to her son. “We’re always connected even if Mommy’s not here. There’s an invisible string that can reach all the way from me to you, forever.”

Henry doesn’t like reading Lasting Love; it makes him cry. When that happens, Wright is able to speak her current truth — as of June, there is no evidence of cancer — and comfort him. She turned to Henry, cuddled next to her on the couch. “This is just a story now,” she tells him. “This is not our story. You know that, right?”

“Mommy, we’re so lucky you’re with us,” says Henry, and burrows his face into her shoulder.