How to depict the care and compassion that dedicated nurses show their patients?

That was the challenge set before the artist who designed a 3D art installation for Seattle Cancer Care Alliance (SCCA) that honors recipients of the DAISY Award, which recognizes exemplary nursing care.

Jake Wagoner, a Gig Harbor, Wash., artist, chose to stain and paint wooden daisies and wood panels with vibrant hues and patterns, offsetting wooden daisy frames that house photos of SCCA’s DAISY Award recipients.  The art, officially unveiled July 30, brightens up a previously nondescript second-floor hallway and serves as an invitation for patients and staff to learn more about the nurses who go above and beyond. 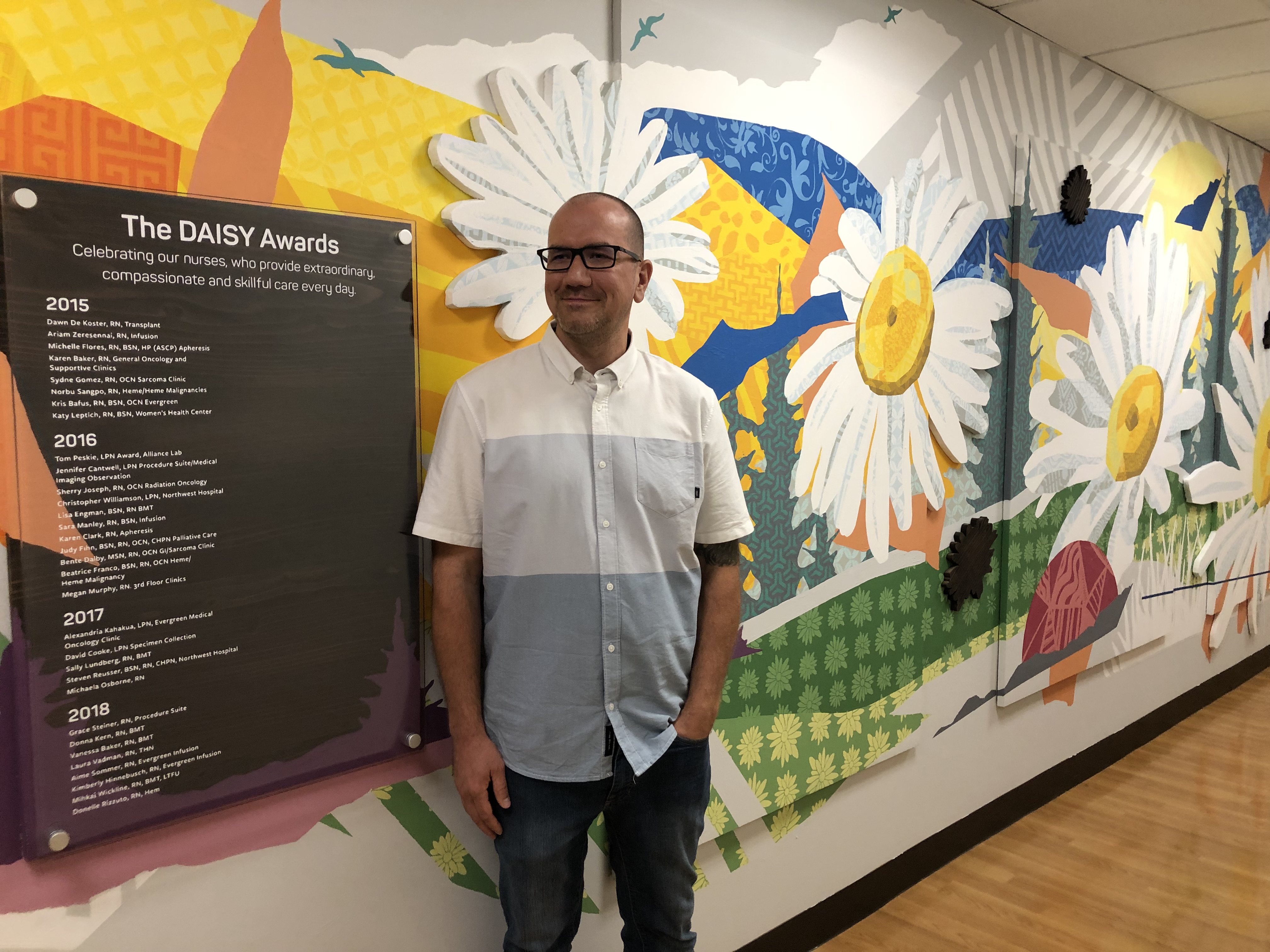 The artist, Jake Wagoner with the DAISY wall he created.

Jake Wagoner pored over pictures of daisies until he settled on images that evoked the right look. Then he crafted the flowers and backdrop and bathed them in color. He intentionally works with bold, bright shades. “I want people to not be able to not look at it,” he says. “I want them to travel through this artwork through color, through pictures, though texture and through dimension.” His work was made more meaningful knowing that his mother, a nurse in Gig Harbor, had received the DAISY Award at her hospital. “I have a strong connection with nurses,” he says.

Grace Steiner is another DAISY Award recipient. She is in charge of SCCA’s bone marrow program, teaching other nurses how to extract marrow to see if transplanted cells are engrafting or if disease remains. “A patient wrote that I was able to do the procedure and give her a hug and reassure her all at the same time,” says Steiner. “After I read that, I felt like I could retire.” Not that she intends to. Steiner has been a transplant nurse at SCCA since 1983.

She was working here in 1999 when J. Patrick Barnes — a two-time survivor of Hodgkin lymphoma — spent eight weeks in treatment for idiopathic thrombocytopenia purpura, an autoimmune disorder. The nurses’ humility, kindness and compassion impressed Barnes’ family. After he died, they created the DAISY Award (Diseases Attacking the Immune SYstem), which has now spread from SCCA to more than 3,000 healthcare facilities and nursing schools in every U.S. state and 23 countries. 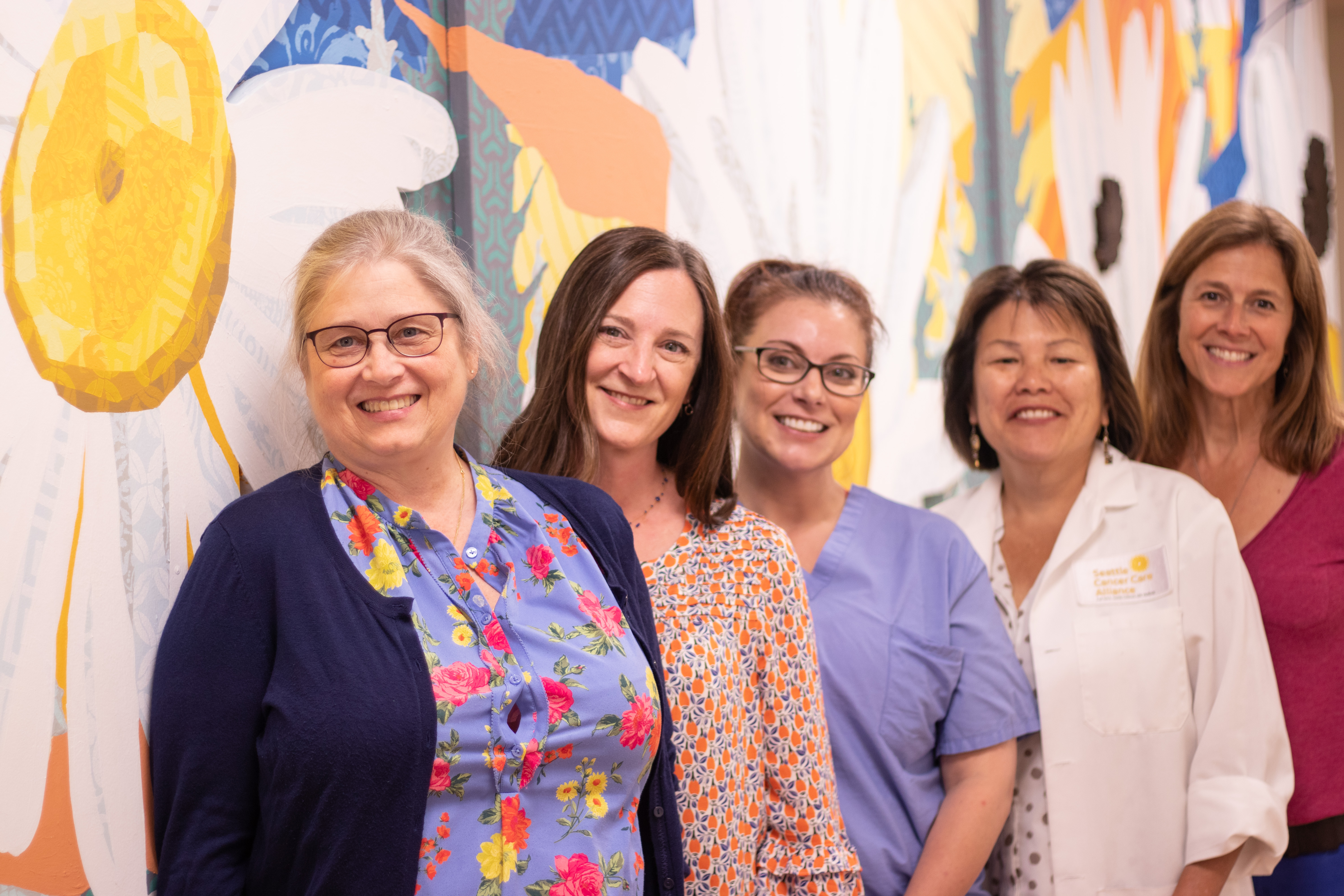 Like Steiner, Kathleen Shannon Dorcy was also at SCCA when Barnes was treated, working as a research nurse. “We are often asked what kind of nursing inspired the DAISY Award,” says Shannon Dorcy, director of clinical/nursing research, education and practice at SCCA. “Nurses who were patient, who listened, who translated a doctor’s words. That kind of care, that kind of time, that human connection is what inspired the DAISY Award.”

It never ceases to amaze Melissa Barnes, Patrick Barnes’ sister-in-law and vice president of operations and international program director for the DAISY Foundation, how nurses around the world share a common goal of dedicating their lives to taking care of complete strangers. Barnes, who traveled to SCCA to attend the DAISY wall celebration, considers the artwork a tribute to nurses everywhere, whose “focus is on providing the very best care possible to patients around the world, to complete strangers.”

“You feel the wall’s warmth and sheer beauty,” she says. “It’s almost like the spirit of nursing is coming through that wall.”