At SCCA, ‘tomorrow's treatments today’ is more than a catchy slogan 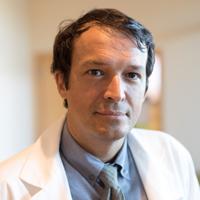 For Dr. Renato Martins, the theme that Seattle Cancer Care Alliance chose for the American Society of Clinical Oncology's annual meeting -- "tomorrow's treatments today” -- is more than just a catchy slogan. It’s his life’s work, illustrated by a clinical trial that was instrumental in changing the way that lung cancer patients are treated.

Dr. Martins, medical director for thoracic/head and neck oncology and outpatient general oncology/hematology at Seattle Cancer Care Alliance, was one of the principal investigators in the Keynote 21 trial that led to FDA approval of a combined regimen of chemotherapy and immunotherapy for adenocarcinoma of the lung. Adenocarcinoma is the most common kind of lung cancer, responsible for about 45 percent of all cases. “A few years later, this is now the standard of care,” says Dr. Martins. “It's how all patients are now treated. It really is getting the treatment of tomorrow, today.

The multi-center trial focused on the use of pembrolizumab in combination with pemetrexed and carboplatin for initial treatment of metastatic non-squamous non-small cell lung cancer. The trial showed a “pretty substantial benefit” to the combination therapy versus chemotherapy alone. Patients on the combination therapy had more tumor shrinkage and longer survival, according to the study, which was published in the Journal of Clinical Oncology. Chemotherapy plus immunotherapy was also shown to be more effective for squamous cell carcinoma, the second most common type of lung cancer.

Clinical trials are at the heart of SCCA’s mission to improve patient care. At any given time, there are hundreds of different trials in progress at SCCA’s South Lake Union clinic. Oncologists assess each patient’s individual situation, considering whether they’d stand to benefit from involvement in a clinical trial. Participation is always voluntary.

Clinical trials help move care forward by providing evidence to back up – or dispel -- new approaches. In the case of pembrolizumab, known commercially as Keytruda, a compelling case could have been made for or against combining immunotherapy with chemotherapy. When chemotherapy kills cells, those dead cells are released into the bloodstream to be reprocessed by the body; that could potentially stimulate the immune system. On the other hand, chemotherapy can act as an immune-suppressant, so it could be argued that pairing immunotherapy with chemotherapy wouldn’t be a wise approach.

“They’re both very sound explanations,” says Dr. Martins. “We realized it was an important question to be asking.”

For patients, having access to clinical trials is synonymous with having access to better care. “When I was beginning my career, we talked about lung cancer as if was a single disease. We gave the same chemo to everyone,” says Dr. Martins. “Now we do genetic profiling to identify mutations, which helps us understand that these are different diseases requiring different medications. The vast majority of trials we do here involve new drugs for ever smaller niches of patients that we try long before they get approved by the FDA.”

By the time the FDA approved the combination therapy for lung cancer, SCCA patients enrolled in the trial had been receiving Keytruda along with their chemotherapy for more than two years. 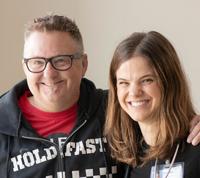 Jim Brown, a firefighter who was diagnosed at age 46 with lung cancer, decided to enroll in the Keynote 21 trial; he was assigned to the control group that received standard chemotherapy without immunotherapy. Disappointed at first, Brown went on to thrive on the chemotherapy. He has since enrolled in another study assessing the effectiveness of blood markers versus CT scans to track disease progression.

Brown, who was diagnosed in 2015, participated in Keynote 21 for 22 months until some disease progression in his lymph nodes prompted his doctor to change course to targeted therapy consisting of oral pills. He continued with that medication for 18 months until he experienced further progression to his brain and ribs, which prompted him to enroll in another clinical trial for lorlatinib, which zeroes in on the ROS1 mutation, which Brown learned he has through genetic testing at SCCA. He stayed on that trial until the drug received FDA approval and continues taking it now that insurance covers it.

On May 6, Brown marked his “cancerversary” -- the date that Brown, a mountain bike racer and snowboarder, learned he had lung cancer. “My cancer is incurable,” says Brown. “But it’s not a death sentence. It’s about chronic disease management.”

His diagnosis hasn’t kept him from his passions. He’s currently recovering from a snowboarding accident in which he dislocated his shoulder and broke two ribs.

Any time a study has been presented to me that I have the opportunity to participate in, I sign up,” says Brown. “We need clinical trials to drive patient care forward.” 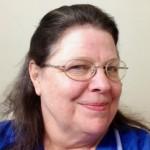 Julie Peterson-Olson, another Keynote 21 patient, feels similarly. Told she wasn’t a candidate for surgery or radiation, Peterson-Olson, 58, suspected that a clinical trial was her only hope. Peterson-Olson was placed in the research arm of the study when she enrolled in October 2015, so she received Keytruda along with chemotherapy. Her tumors shrank on the trial and have not returned.

“I’ve been told that many people in my situation haven’t survived as long or haven’t tolerated treatment, so I feel it’s important to continue to show up and participate,” she said.

It’s what convinces her to brave traffic to come to SCCA every three weeks from her home in Tacoma.

“There’s no statistical data for where she’s at right now,” says her partner, Tim Rogers, who accompanied Peterson-Olson to the clinic as she waited to be paged to start her latest infusion. “She’s helping to build that for whoever comes next.”