When Michael Rankin’s shoulder started hurting him two years ago, he didn’t hesitate to get it checked out. First he was referred to physical therapy. Then when the pain didn’t decrease, he got an X-ray, which eventually led to an MRI and biopsy that revealed the ultramarathon runner had stage 4 lung cancer.

Rankin, who is African American, is enrolled in a clinical trial at Seattle Cancer Care Alliance, where patient navigators note that Rankin’s path to treatment stands in stark contrast to that of so many minorities. Compared to other racial and ethnic groups in the U.S., African Americans have the highest death rate and the lowest survival rate for the majority of cancers, according to the American Cancer Society. The gloomy outlook is largely due to differences in socioeconomic status and access and availability of health care. In 2017, more than one in five blacks lived below the federal poverty level compared to 9% of whites, making them more likely to struggle to pay for high-quality medical care — and to find it in the first place.

Cancer researchers are aware of the ethnic disparities in cancer survival, which are highlighted during Minority Cancer Awareness Week, observed April 8 to 14. But there is optimism too as the ethnic and racial gap in cancer death rates has begun to shrink in recent years. The overall cancer death rate is decreasing faster in blacks than whites. Over the past 25 years, these declines have amounted to more than 460,000 fewer cancer deaths. 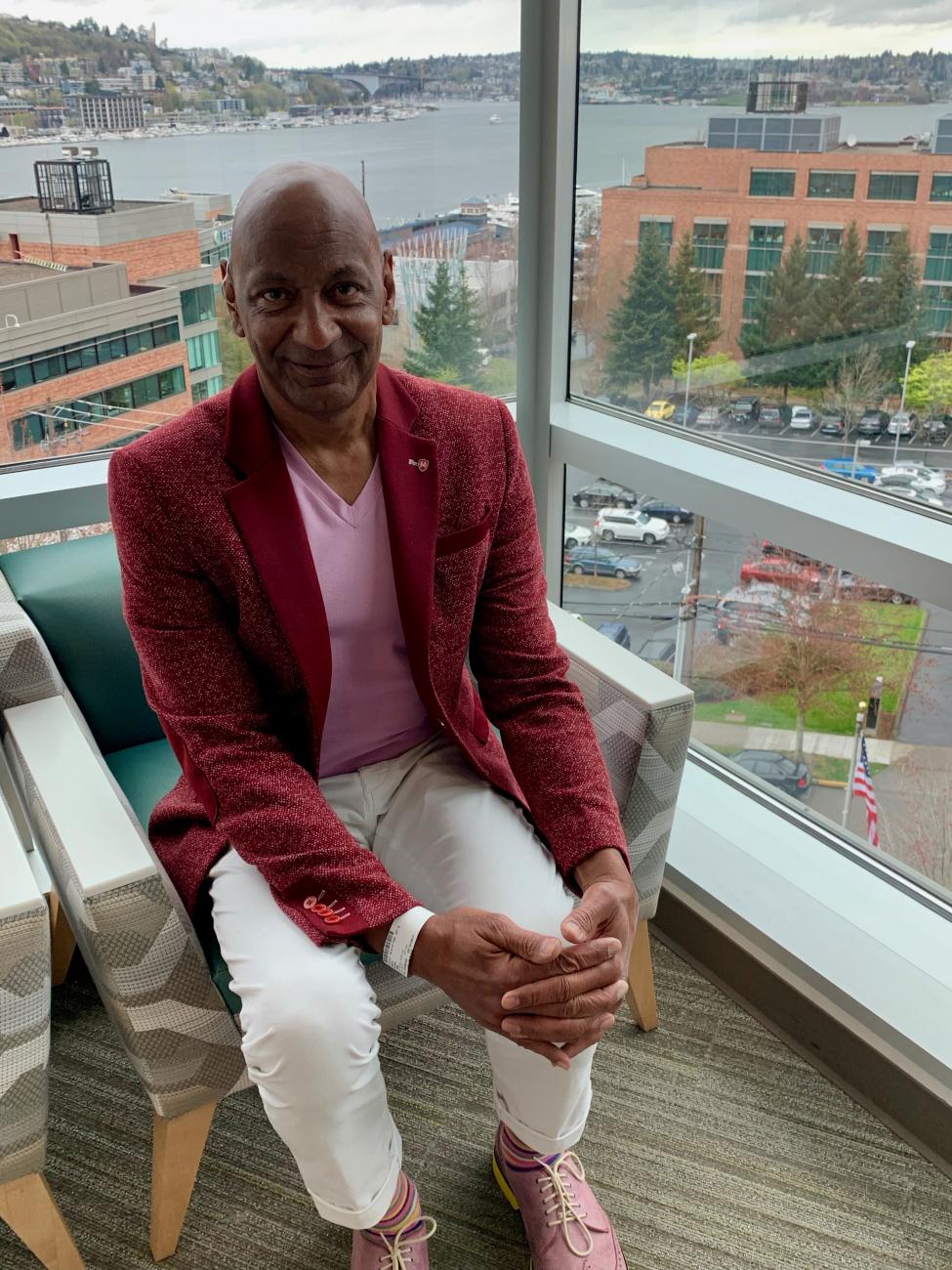 Michael Rankin is dressed to impress before treatment at SCCA.

At SCCA, patient navigators work to connect patients in need of financial support and assistance to community resources. They also help patients steer their way through what can be a confusing maze of health care, especially to those who grew up in communities with a distrust of seeking medical care.

Rankin knows he bucks that trend. He’s a self-proclaimed gym rat who visited the doctor regularly and had lived a healthy life — eating well and working out daily — with one glaring exception. He smoked up to two packs of cigarettes a day, taking up the habit when he was 15.

He smoked for 38 years, ignoring a doctor who nagged him to quit, until one night in 2008 when he left the gym, got into his car and decided he was going to stop smoking, right then.

In the years since, he’s run an ultramarathon, 52 miles from Mt. Rainier to Pt. Defiance Park. But his decades of smoking caught up to him last year when he was diagnosed with Stage 4 lung cancer, which had spread to his brain. Last summer, he had surgery to remove the largest two of 12 tumors; radiation targeted the rest. At SCCA, Rankin is now participating in an immunotherapy clinical trial.

Patient navigators can help. Carmen Cunningham, one of SCCA’s three patient navigators, is from the Dominican Republic and speaks Spanish. She founded the program in 2007. “Historically, the poor and disenfranchised minorities who are not fully integrated into the mainstream suffer a lot of oppression in the community, as a culture and at work,” she said. “You are not treated the same as a white person if you are Somali, Asian, Hispanic or African-American. We want to make sure that doesn’t happen at SCCA.”

Advocating for the patient

Patient navigators help patients understand their treatment plan and the resources, including financial benefits, that are available to help support them. That can be a difficult task, considering the skepticism with which many minorities view medical care. “There is fear and mistrust of the medical system within the African-American community from my personal experience, but it exists within all minority cultures,” says patient navigator Michelle Watson, who is African-American. “Say you’re in a new place and you don’t speak the language. Maybe you don’t have family here. Maybe you never saw a doctor before and now you are routed into this world. What it boils down to is helping people understand how to reach out to the medical community, then helping them figure out how to pay for that treatment.”

Increasing diversity among medical providers is one way to help patients feel more comfortable. Dr. Rafael Santana-Davila, Rankin’s oncologist at SCCA, understands the hesitancy that minorities may feel in seeking medical care. Originally from Mexico, Dr. Santana-Davila notes that Latinos who don’t speak English well face an additional obstacle to staying healthy. “Having a language barrier makes seeking care even more complex,” he said. Seeing a doctor or nurse who comes from a shared background and speaks a patient’s language can have a positive impact on a patient’s experience with seeking medical care.

As for Rankin, he is working on rebuilding his strength so he can hit the marathon circuit again. He credits his fitness obsession and his decisions to stop smoking and to seek medical care as soon as he didn’t feel well to his survival. Now he wants other minorities to understand the importance of going to the doctor regularly. “I’m on a mission to help inspire as many people as I can,” says Rankin, whose advocacy includes helping encourage other smokers to give up tobacco.