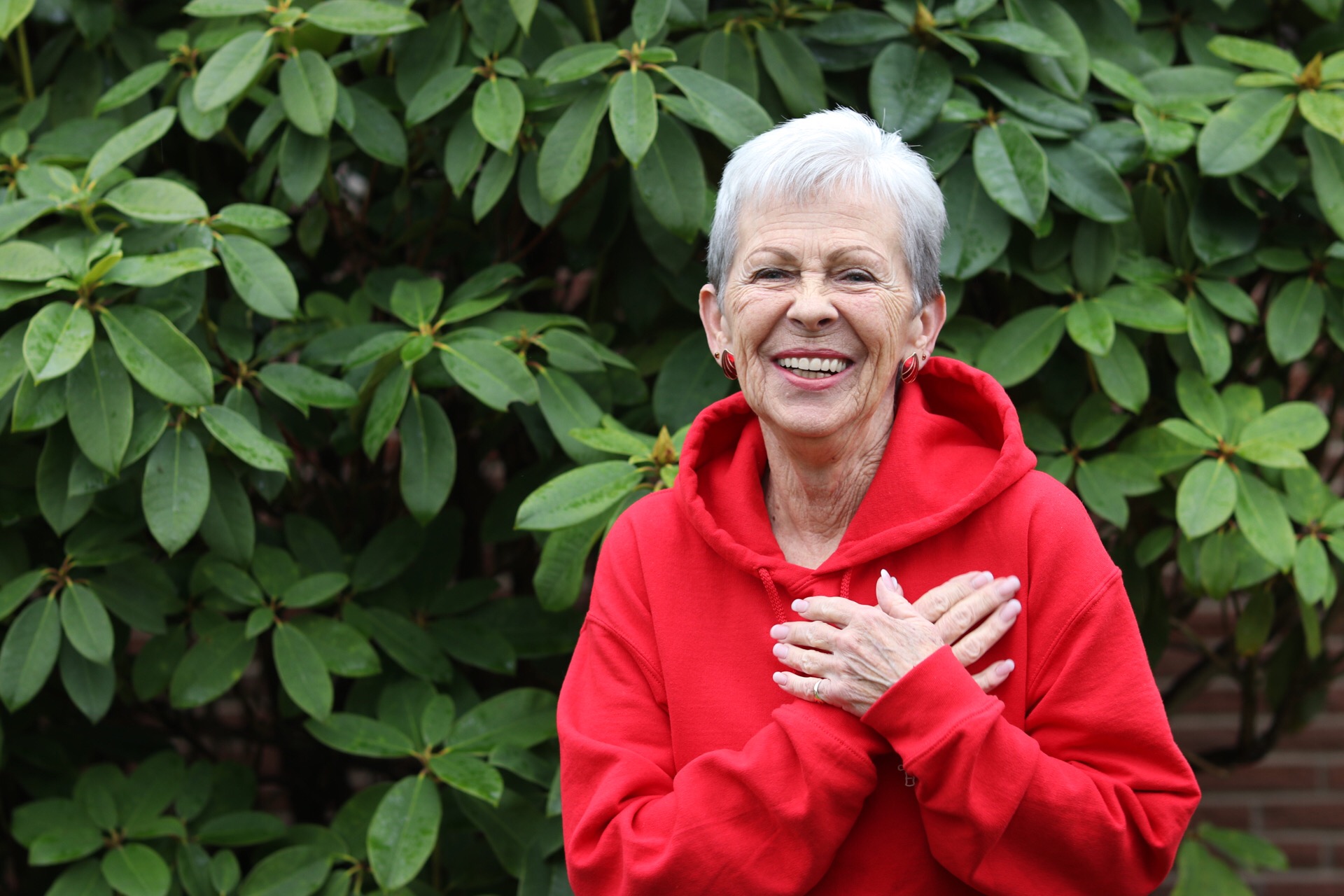 Ten years ago, Karyn Budnick-Haug went in for a colonoscopy and left with the knowledge that she had a small spot of potential concern low on her left lung that a scan had inadvertently discovered.

It wasn’t a complete shock to Budnick-Haug, who had smoked for 43 years. “I knew I was being stupid and yet I didn’t stop,” she said. In fact, her habit intensified after her husband died in 2008, when she went from smoking eight to ten cigarettes a day to a whole pack.

But now she’d been catapulted into a different category: watchful waiting. The suspicious spot wasn’t large enough to remove, but doctors recommended keeping an eye on it. Every year since, Karyn Budnick-Haug, 75, has come to Seattle Cancer Care Alliance (SCCA) to participate in its Lung Cancer Screening program. She gets a chest scan to see if the spot has changed.

In November 2017, it did. Dr. Douglas Wood, chair of surgery at University of Washington and co-chair of the SCCA/UW Thoracic Oncology Program, told Budnick-Haug that the spot had grown 4 millimeters since the previous year. “I said big flippin’ whoop but he said that means it’s changing,” said Budnick-Haug, a retired hairstylist in Shoreline who also owned a commercial cleaning service. Dr. Wood recommended removing it.

“Yes,” he responded. “That is why we do this – to catch things early.”

Budnick-Haug had surgery in February 2018 to remove the Stage 1 tumor. The cancer was caught so early that she did not need chemotherapy or radiation. And with such a small tumor, there is a 90 percent chance of being cured, a significant improvement over the 18 percent chance for the average patient who is diagnosed with lung cancer.

SCCA launched its Lung Cancer Screening program (LCS) in 2012. Since then, more than 1,000 patients have enrolled in the joint program with the University of Washington. Patients can receive their scans at six different sites: SCCA, UW Medical Center, Harborview, the Roosevelt campus, Eastside Specialty Center, and Northwest Hospital.

Patients must meet screening criteria. They have to be a current or former smoker, 55 or older, who is asymptomatic for cancer and has smoked at least 30 “pack years” – a pack a day for 30 years or two packs a day for 15 years. Former smokers must have quit within the past 15 years.

The screening program involves a comprehensive questionnaire about smoking history and family history and a low-dose screening CT scan, which delivers one-third the radiation dosage of a diagnostic chest scan. If results are normal, patients return in a year for a repeat scan. If there are suspicious findings, patients are advised to call the Lung Cancer Early Detection and Prevention Clinic or follow up with their primary care provider.

Although SCCA sends reminder letters encouraging patients to return for their annual scan, just one in three come back. Radiologists assign scores of 1 to 4, from benign to suspicious, to patients’ scans. Patients with benign scans are the least likely to return, but that’s a missed opportunity to detect disease early, says Kaylee Petersen, LCS nurse practitioner.

“This isn’t a one-and-done kind of thing,” says Petersen of the screening program. “It is a process. The scan doesn’t predict the future. It just tells us what the lungs look like on this day.”

Heavy, long-time smokers may have a fatalistic outlook and mistakenly believe there’s nothing that can be done to help them. “When they see their scan shows no sign of cancer, they don’t come back because they don’t want to face the possibility of cancer,” says Petersen. “Others take it as a sign of, ‘I’m good.’”

'You are not smoking'

All LCS patients are offered help and support to stop smoking, plus free counseling. “Studies show that people do far better when they receive coaching to formulate a strategy to actually stop tobacco use and manage withdrawal symptoms,” says Donna Manders, SCCA’s tobacco cessation specialist. Manders offers in-person visits or phone counseling to smokers, 70 percent of whom want to quit, she says. Counseling includes assistance navigating insurance benefits for tobacco cessation, if patients are interested.

Not Budnick-Haug. She had consistently declined to participate in the smoking cessation program – until last year. Once, she went so far as to graciously accept a package from the smoking cessation program that included gum, a journal to record progress and thoughts, nicotine lozenges and nicotine patches. Then she shoved it into her linen cupboard and forgot all about it.

“I wouldn’t have bet you a nickel I could do this because I didn’t want to,” she says. “Finding a tumor changed my mind.”

Budnick-Haug used nicotine patches and self-talk to help herself quit. “You are not smoking,” she would say aloud 20 times a day in the beginning. By last November, she was down to reminding herself just once or twice a day. Now it’s only every other day.

Smoke free for a year, Budnick-Haug now goes for scans every six months to monitor her lungs for any changes.

Quitting cigarettes has been a significant lifestyle change after 43 years of being a smoker. Budnick-Haug was married twice, both times to husbands who smoked. Many of her friends smoke. But her sons, ages 49 and 52, never took up the habit. “My boys are thrilled,” she says.

“It’s nowhere near as hard as I thought it would be,” she says. “I have no real desire to start again.”