Amber Hahto was in the middle of treatment for breast cancer in 2010 when well-intentioned friends started sending her articles about scalp cooling. It sounded like science fiction, the notion that you could wear an icy cap during chemotherapy and avoid perhaps the most dreaded side effect of treatment: going bald.

Amber Hahto was in the middle of treatment for breast cancer in 2010 when well-intentioned friends started sending her articles about scalp cooling. It sounded like science fiction, the notion that you could wear an icy cap during chemotherapy and avoid perhaps the most dreaded side effect of treatment: going bald.

It was too late for Hahto, who had already begun to lose her waist-length hair. “I went the whole wig route,” says Hahto, 48, a creative director at Amazon.

Last fall, Hahto was shocked to learn that her cancer had returned and spread. When Dr. Jennifer Specht, Hahto’s oncologist at Seattle Cancer Care Alliance (SCCA), explained that cancer would now be a chronic condition, Hahto couldn’t help thinking of her hair, which she had grown out over the years since her initial treatment until it once again grazed her waist. “The first thing that came to mind was that I had just gotten my hair back the way I wanted it,” says Hahto.

How they would treat the disease was Hahto’s primary concern but a close second was exploring how she might keep her hair. “I thought, ‘Oh my god, am I going to be bald or have crappy hair for the rest of my life?’”

She asked Specht about scalp cooling. Specht wasn’t sure how effective it would be over the seven months of chemo that Hahto was about to begin, but Hahto wanted to give it a try.

The timing was fortuitous: SCCA had just started offering Paxman scalp cooling in October 2017, six months after the FDA approved the product for use in breast cancer patients.

Amber Hahto, before, during and after scalp cooling and chemotherapy treatment.

Hahto used the cooling cap every week during her nearly 30 treatments and kept about 40 percent of her hair — not as much as she would have wanted but enough to be able to wear long pigtails and a hat that concealed the top of her head, where most of her hair loss occurred.

Wearing the cap wasn’t exactly comfortable, says Hahto, but it wasn’t unbearable either. The first few times were the hardest, as were the first 10 to 15 minutes of each hours-long session. “After that, your head is numb and you can’t really feel it,” she says. “It’s a weird sensation. I hear people describe it as an ice cream headache, almost like your head is in a really cold vise.”

Nearly half of women with cancer consider losing their hair to be the worst part of treatment; 8 percent say they wouldn’t have chemotherapy because they’re worried about going bald, according to a 2010 study in Current Opinion in Supportive and Palliative Care.

Chemotherapy triggers hair loss because it targets rapidly dividing cells; hair is the second fastest dividing cell in the body. Scalp cooling works by temporarily lowering the temperature of the scalp, which reduces blood flow and decreases the amount of chemotherapy that reaches the hair follicles.

Patients wear a silicone cap connected to a cooling machine for 30 minutes before beginning chemotherapy, during infusion and up to 90 minutes afterward, depending on the type of drug being administered.

There are a number of scalp cooling products on the market, but Paxman caps helped a significant number of early-stage breast cancer patients avoid losing more than half their hair, according to a recently published study in the Journal of the American Medical Association. SCCA was one of the British company’s first U.S. contracts after FDA approval.

SCCA providers had heard about scalp cooling and formed a committee last year to figure out how to make the product available to patients. “I’ve been an oncology nurse for 18 years and have seen that patients losing their hair is one of the hardest things to deal with,” says Trisha Marsolini, SCCA infusion nursing supervisor and its scalp cooling coordinator. “It’s a constant reminder that you’re sick.”

In the year that SCCA patients have been trying scalp cooling, Marsolini has observed that even patients who lose most of their hair are grateful to be keeping some of it. “I haven’t had any patients who have gone through the whole process tell me they regret doing it,” she says. “It gives them control.” 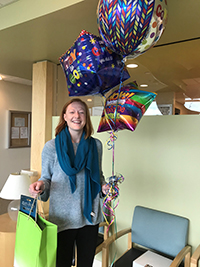 From beer cooling to scalp cooling

The company began after Sue Paxman — 34 and the mother of four young children — was diagnosed with breast cancer in the early 1990s. “The idea of losing her hair was something she couldn’t bear,” says Richard Paxman, her son and CEO. She tried scalp cooling at her local hospital in England, but it wasn’t effective. “She was devastated,” he says.

The Paxman family business was refrigeration — beer cooling, to be exact — and Richard Paxman’s father, an engineer, decided to explore why the cooling hadn’t worked for his wife, who died in 2000. “It’s why we’re so passionate about this,” says Paxman.

For patients diagnosed with cancer, and women in particular, going bald can be a blow to their self-image. Not all chemotherapy leads to hair loss, but it’s a common enough side effect that it’s a telltale sign that people have cancer, prompting furtive glances from strangers at the grocery store and whispers at work.

Jessica VanderGiessen, 6 feet tall with long red hair, was diagnosed with breast cancer last year at age 25 shortly after relocating from California. Scalp cooling helped her keep most of her hair and maintain her privacy at the medical device company where she had recently started working. “Moving to a new place and meeting new people, I wasn’t introduced as a patient unless I wanted to be introduced like that,” says VanderGiessen. “It helped me have a look good, feel good mentality and not feel as sick as I really was.”

Not that it was easy as her head went numb and her hair froze to the cap. “It’s annoying, but it works,” says VanderGiessen, who compared the experience to wearing a “giant ice bucket” on her head. “For what I was able to gain, it was irreplaceable.”

‘Not everyone has to lose their hair’

Paxman has been available in the U.K. since 1997, and it’s fairly standard protocol there now. But the product has been available in the U.S. only since last year. About 140 U.S. sites are now offering Paxman, from major cancer centers such as SCCA to small community oncology clinics. “The biggest barrier is that people don’t know about it,” says Paxman. “We are trying to change the supportive care landscape in the U.S. People have accepted that hair loss is something that would happen with chemo, but we are slowly educating that not everyone has to lose their hair.”

As word spreads, Paxman hopes that insurance companies will cover the service. Until then, it’s considered an out-of-pocket expense. The cap costs $500 and each cooling session costs up to $200, up to a maximum of $2,200.

In June, the FDA approved Paxman for use by most solid tumor patients, including men. SCCA is in the process of ramping up support for what providers expect will be increased demand. In January, all eligible SCCA patients with solid tumors will have the option to try scalp cooling.

Hahto thinks that’s a positive step. “Right or wrong, a lot of how we feel about ourselves is tied to our hair,” says Hahto. “This helped me have a brighter outlook. Especially if you’re metastatic, you are thinking, ‘How long do I have left on this planet and am I going to be bald and not looking like myself?’

“It was hard to do, but I would do it again in a heartbeat,” says Hahto, who notes that many women choose to shave before their hair falls out. “This is about the same thing: taking control of your destiny.”

For more information about the scalp cooling services offered at SCCA, go to paxmanusa.com. Find more details about scalp cooling at breastcancer.org/tips/hair_skin_nails/cold-caps or scalpcooling.org/decision-aid. Interested patients can contact their SCCA treatment team.