Tom Boyle was screened at SCCA and UW's Lung Cancer Screening Program. The senior parachute instructor's lung cancer was detected early and was treated with surgery. 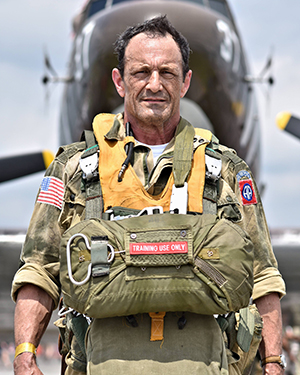 I am a cancer survivor because of lung cancer screening

I am in my early 60s, live in Seattle and recently married a woman I’ve had a crush on since seventh grade. I had a 30-year career in purchasing, primarily aerospace electronics. Additionally, I’m a senior parachute instructor with the WWII Airborne Demonstration Team, based out of southern Oklahoma, and routinely fling myself (and others), out of a WWII-era C-47 at 900 feet in the sky. Piece of cake.

As of June 2016, I realized the dream of early retirement, and I thought I was ready to grab the world by the tail.

I found my way to SCCA after my wife — a nurse at the University of Washington’s Student Health Center — and my primary care provider convinced me to start having annual chest scans. Initially, I was hesitant, because I’d deluded myself into thinking I had done everything right. After all, I was doing everything right: eating healthy food, drinking in moderation, taking vitamins, getting lots of exercise and so on. But despite these healthy habits, I fit the criteria for annual lung cancer screenings, because I had smoked for 40 years.

I had my next scan in 2016. Negative results. More great news.

But in 2017, the scan found something. I had a tumor. And it was lung cancer.

I live in Seattle, so I knew I had choices of what to do next. I also knew SCCA’s reputation for excellent care and how well they had treated my mother when she had cancer — and beat it, with their help. The skill, care and caring that I witnessed firsthand led me straight to SCCA.

First, I met with David Madtes, MD. He is a pulmonologist who helped me understand exactly what I was dealing with: a tumor about the size of a grape that had not yet spread and that was operable. Within just a few minutes, I knew that I was in the best possible hands. The emotional roller coaster came to a stop and I walked out of my first appointment thinking, “I might just beat this thing.”

A week later, I met my surgeon, Farhood Farjah, MD, MPH. There was no doubt in his mind as to what we were looking at — no biopsy was necessary and, thus, there was no sense in puncturing the tumor and risking it spreading. The only question was how much lung to cut out. At the end of that first meeting with Dr. Farjah, we had a plan. I realized that between Dr. Madtes and Dr. Farjah, I’d hit the jackpot. I knew I was going to beat this thing because I had a team of extraordinarily skilled people supporting me.

Surgery to remove the tumor

A couple of weeks later, on June 5, I went in for surgery. The following days of recovery were a blur. But I vividly remember the moment when Dr. Farjah walked into my room and, without a word, handed me the pathologist’s report. After endless tests and having learned to decipher test results, I knew immediately what I was looking at: the best possible news. During the operation, Dr. Farjah had taken samples of surrounding lymph nodes as well as samples from some of the surrounding organs.

I tried to maintain my composure, but I couldn’t. I dissolved in tears.

The rest of that week in the hospital was just plain hard work: dealing with pain, breathing exercises, catheters, physical therapy, shots, more shots, X-rays and yet more X-rays. I had to get strong enough to leave the hospital. And once I was home, I had more weeks of work ahead of me to gain full recovery. But it was worth it. A million times over — it was worth it.

Screening can save your life, just like it saved mine

I am alive today because of two things. First, I had the sense to listen to my wife and my primary care provider when they told me to get screened for lung cancer. Second, the lung cancer screening program and the amazing providers at SCCA and UW Medicine.

So far, I’ve managed to convince a few friends and family, all former or current smokers, to get screened for lung cancer. I tell them that it’s just 15 minutes of your life, once a year, and it may save your life — just like it saved mine.