Most of us expect to go through an interview before starting a job, but have you ever thought about interviewing your physician before you work together? Randall Broad did — in fact, he interviewed four physicians before deciding to receive his lung cancer treatment at Seattle Cancer Care Alliance (SCCA) and UW Medicine. 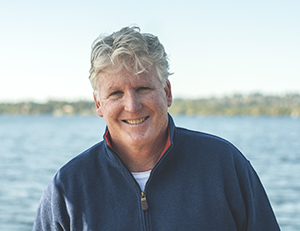 Most of us expect to go through an interview before starting a job, but have you ever thought about interviewing your physician before you work together ? Randall Broad did — in fact, he interviewed four physicians before deciding to receive his lung cancer treatment at Seattle Cancer Care Alliance (SCCA) and UW Medicine.

Now a 10-year lung cancer survivor, Broad’s greatest mission is to advocate for fellow patients. The Kirkland  father of two is actively involved in patient advocacy both locally and nationally: talking with patients one-on-one, partnering with physicians and speaking at events.

“I’ve noticed that patients, especially ones who are newly diagnosed, don’t know what questions they need answered,” he says. “I want to help break down the barrier on both sides of the stethoscope.”

Never a smoker, Broad was shocked when he first learned his diagnosis in March 2008. After a bronchoscopy revealed he had a 3-cm tumor in the lower left lobe of his lung, he was diagnosed with stage III non-small cell lung cancer at age 52. He knew he needed to advocate for himself and wanted to meet with several doctors before deciding where he would seek treatment.

“I’ve shared my story with over a thousand people through my advocacy work, and I can’t tell you how many people have come up and told me, ‘I had no idea I could fire my physician!’” he says.

Broad wanted to take more control of the decision-making in his treatment plan — and that meant carefully choosing the best physician for him. He brought a friend along each time he went to an “interview” with a new physician. When he first met Renato Martins, MD, at UW Medical Center, Broad says he was impressed with Dr. Martins’ ability to be educational, compassionate and communicative.

“He gave me the feeling that I would be in the best hands of anyone I had ever met,” Broad says.

Not only did Dr. Martins clearly explain everything, he also asked Broad at the end of their meeting if he had any questions. Broad realized that Dr. Martins could offer something he hadn’t found anywhere else: the opportunity to be part of the decision-making process for his treatment.

Broad’s original treatment plan included surgery to remove his lower left lobe. However, the surgeon discovered that Broad still had active lymph nodes aggressive enough to require additional treatment. Dr. Martins assured him that there were other options; in August 2008, Broad started a 10-week regimen of radiation and had three chemotherapy treatments. He says he never felt sick, except when going through chemotherapy, but his side effects included nausea, lung infections and muscle cramps.

After completing treatment in December 2008, Broad started traveling with his then-teenaged children for the next year.

“My kids and my friends became the most important part of my life,” Broad says.

A decade later, Broad’s children and friends continue to be a big part of his life. And he continues to stay active in helping other patients. Earlier this year, he spoke at a Seattle industry event on the importance of patient-physician communication. Broad is also partnering with Gary H. Lyman, MD, MPH, of Fred Hutchinson Cancer Research Center, to improve the communication process between patients and physicians. During these “CSessions,” Broad interviews Dr. Lyman on the subject; next, he plans to continue the discussions around the web with various audiences.

But Broad’s work isn’t just with patients and physicians. In fall 2018, he attended a cancer summit in Washington, DC; in December, he will return to the capital to meet with state representatives on behalf of an advocacy group to protect funding for the imaging used in lung cancer screenings.

And he’s still actively involved in his own care. Each year, Broad returns to SCCA for a checkup, where he gets blood work and a CT scan done. While he has not had a cancer recurrence, he is more susceptible to catching pneumonia; last summer, when the Puget Sound region had heavy smog, he experienced shortness of breath and heavy coughing that brought him to the ER. In partnership with his physicians, Broad looks forward to maintaining an active role in his health care for years to come.

“SCCA is still a pretty big part of my life,” he says, “and I’m grateful for that.”