Sean lives in the space between control and surrender. The father of three likes to be in control of his personal situations, but he also intimately understands that the most carefully organized plans and dearest dreams can crumble. In 1999, Sean learned that a rare blood disorder gene, the RUNX1 gene, frequently involved in AML, stalks his family line. His grandfather and great-grandfather both died of AML. A cousin had a bone marrow transplant at University of Washington (UW) Medical Center at the age of 19 after being diagnosed with AML.

In 2010, cancer came to his own house. His youngest daughter, Louisa, was 12 when she began running a fever shortly after New Year’s Day. When it climbed to 106 degrees, Sean and his wife, Laurel, rushed her to the hospital, where tests were run. Later, a doctor brought the parents out of Louisa’s exam room and quietly told them, “We think she has leukemia.” When everything falls away, Sean knows that what’s left is the moment and the people you love who are in it with you. “Anything you imagine will happen is not going to match up to the reality,” he said.

“Louisa had a transplant,” the most definitive treatment to cure her leukemia, “because of our family history,” Sean said. At that time, he and his other two daughters had bone marrow aspirations, tests to examine liquid marrow withdrawn from the bone with a hollow needle. That’s how he learned he had MDS.

Sean and Louisa often joke with each other about who has had more treatment. Sean “wins” as having had more blood transfusions. Louisa is ahead in the category of having had the most chemotherapy. They debate who’s had more bone marrow aspirations. “I had more radiation,” Louisa said. Her dad takes the lead in having had two transplants of peripheral blood stem cells to Louisa’s one transplant of umbilical cord stem cells.

Going through this shared experience with Louisa has added another dimension to their relationship, he said.

“There are things that happen to me, and I’ll tell Louisa, and I know she understands in a way no one else will,” Sean said.

Marshall Scott Horwitz, MD, PhD, professor of pathology and medicine and adjunct professor of genome sciences at UW, along with Hamish Scott, MD, in Adelaide, Australia, have been working with Sean and his family to identify the mutation in the Cryan family. They have helped facilitate sample collection for Paul Liu, MD, from the National Institutes of Health, who has been working on repairing the mutation in Sean’s genome “by making stem cells from Sean’s blood, editing the genome, and showing that we can restore normal blood development,” Horwitz said.

“We’ve been part of research for many years, since I was five….I kind of consider it a selfish way of giving back,” Sean said. “The things they discover may help me and my descendants and, in so doing, many others. Our family appeared in various journals from the 1960s through the 1980s because of research in which we participated on the East Coast. It picked up again when Dr. Horwitz started publishing in the late 1990s. There were photos of my blood in particular in Scientific American at one point.”

Sean, an architectural project manager, has had a long road back to health. Between 30 and 40 percent of patients with MDS will develop leukemia, according to H. Joachim Deeg, MD, Sean's doctor at Seattle Cancer Care Alliance (SCCA) and a member of the Clinical Research Division of Fred Hutch. Sean’s particular mutation of MDS was high risk, meaning that it had a high probability of progressing to leukemia.

“He is someone who in his personal and professional life has been quite successful and in control, and this disease finds him in a situation where he’s not always,” Dr. Deeg said. “He wanted to get out from under the Damocles sword.”

Sean had a non-myeloablative transplant in 2012—a transplant that requires less intense chemotherapy and radiation than traditional bone marrow transplants. The procedure took care of his MDS, but the transplanted cells failed to engraft, leaving Sean without an adequate system to produce new blood cells.

“After Christmas 2012, things were progressing slowly,” Sean said in regard to recovering from his transplant. His white blood cells “didn’t want to die,” he said—an indication that the transplanted cells were not engrafting and taking the place of his diseased cells. He had mild graft-versus-host disease affecting his skin, as well as lung issues. He received platelets every day and red blood cells every third day for a while. “It kept me going,” he said.

By the summer of 2013, another donor was located for Sean, and he underwent a second transplant in August 2013. By summer 2014, he looked forward to returning to work and had resumed riding his bike, a passion he’d set aside after his health became tenuous. The number of doses of medicine he takes each day has shrunk from 55 to 26; he still grapples with fatigue. 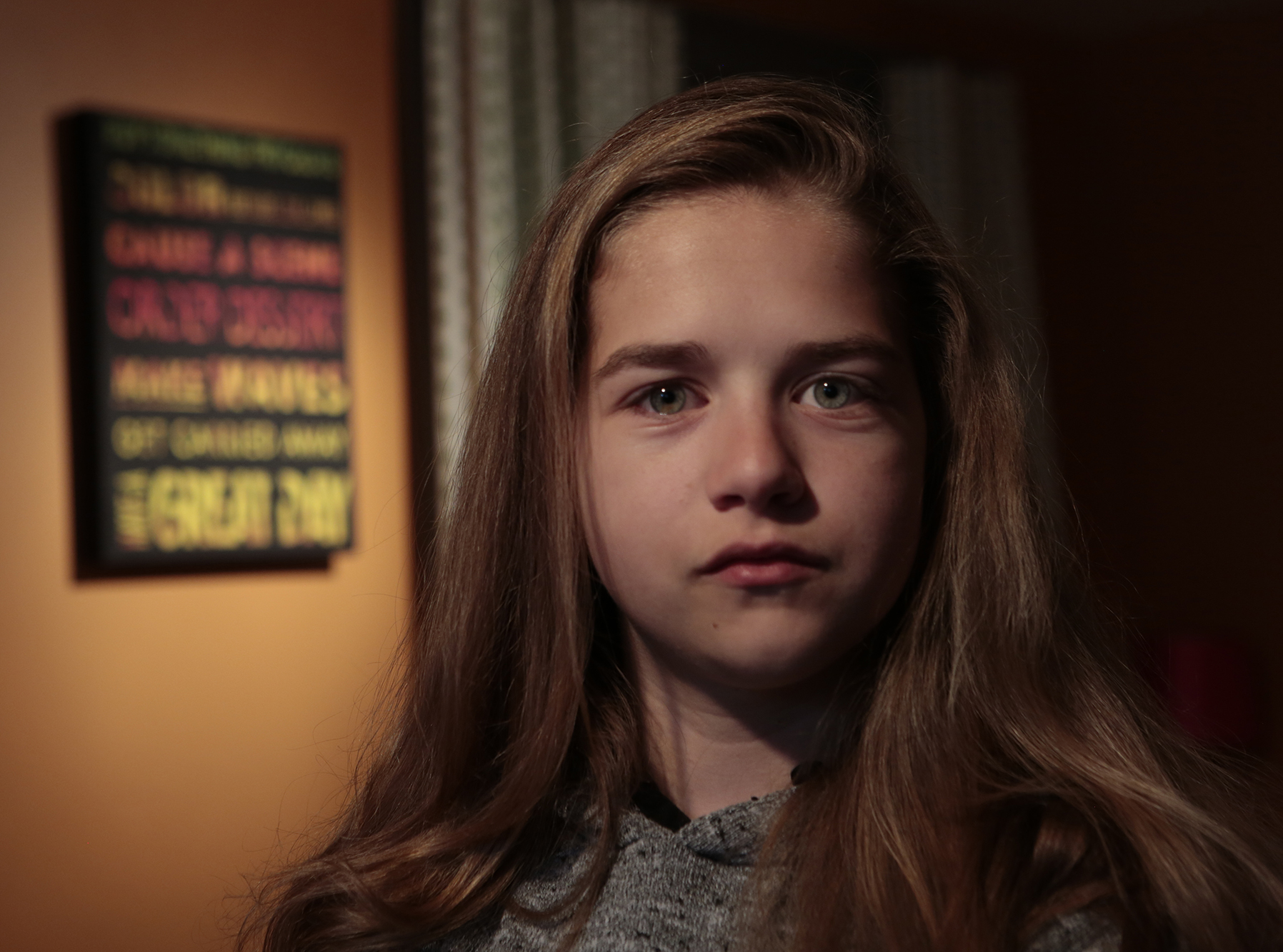 “I Just Wanted Her to Live”

When Louisa was young, Sean’s hopes for her were so broad that they couldn’t be contained in concrete wishes. He remembers just being curious about who she’d become.

When she got sick, his wish for her sharpened: “I just wanted her to live,” he said.

He and Laurel clung to the words of Abby R. Rosenberg, MD, MS, at Seattle Children’s, where Louisa was treated. “She said every patient has a 100 percent chance of survival. It’s just that some don’t make it,” he said. “It was a very positive way to hear it.”

Louisa was hospitalized for 177 days while she underwent chemotherapy and radiation, followed by her transplant and recovery time. Her parents alternated nights sleeping in her hospital room, with the other parent staying at home with their two older daughters, Emma and Lily. At night, after everything was quiet, Sean posted to Louisa’s CaringBridge online journal to update friends and family. It was when he processed things, he said.

“Bedtime means dropping the distractions, entertainment, and obligations of the day, and settling in with the reality of life,” he wrote in a post on June 1, 2010, several weeks after Louisa’s transplant. “It’s a time when I wish we could blow a cloud of dust over Louisa’s eyes so she would float off and drift for hours, without her tethers and medication, as free in her rest as she feels when she is off the machines, taking her nightly shower and riding bikes around the unit.

“Instead, bedtime means thickened mucous irritating her throat and cyclosporine infusions causing burning sensations, and small infections swelling and causing discomfort in her hands. Bedtime is not the untroubled sleep of children, but the labored half-rest of the infirm, interrupted by alarms on pumps, timed medications, vital signs, fevers and abrupt spasms from long-empty stomachs.” 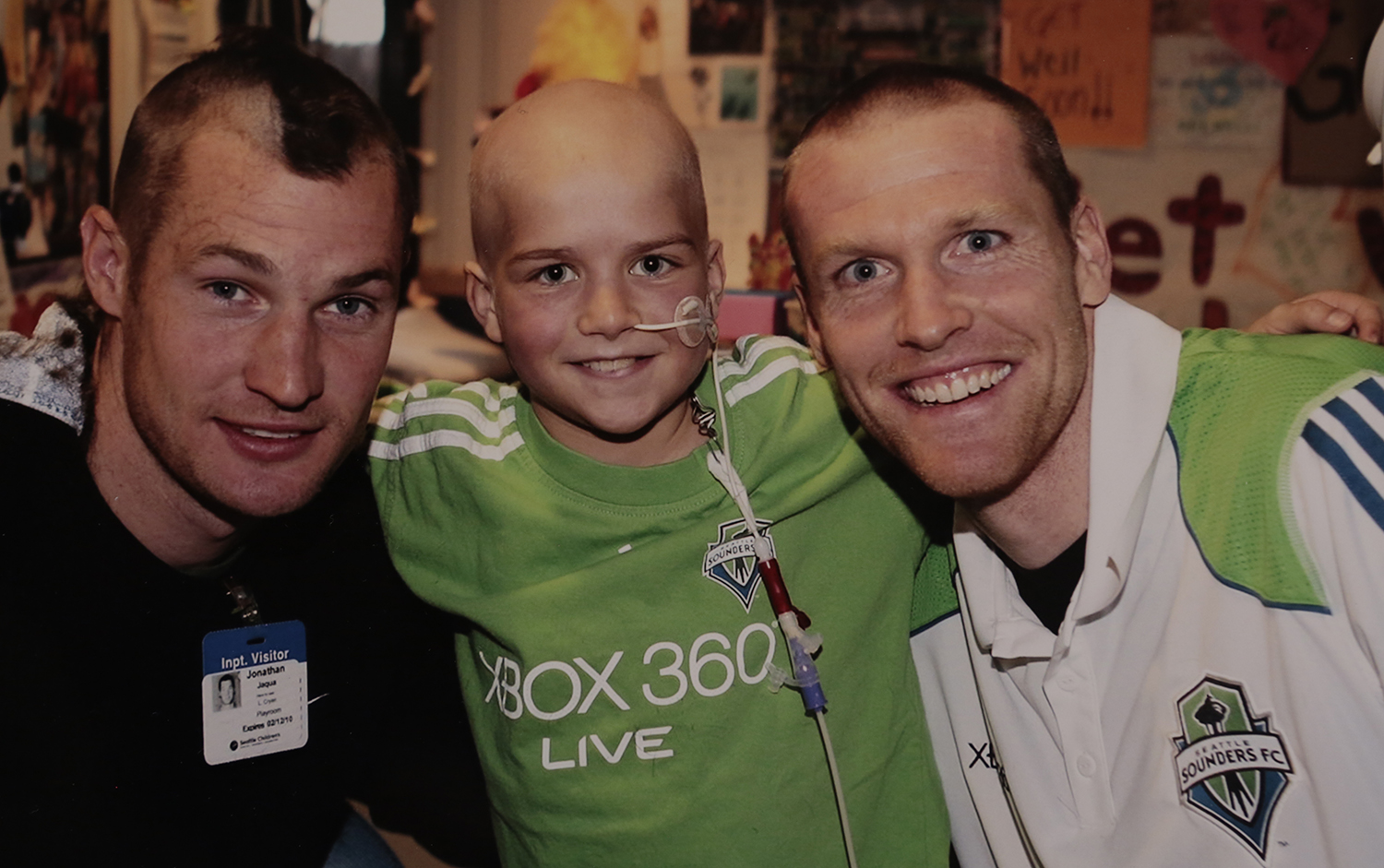 “You Have to Operate Assuming It Will Work Out”

During Louisa’s stay, some young friends she made grew sicker and died, including a little boy she loved named Anthony, who passed away at the age of 2.

It was a reminder of the one possibility Sean wouldn’t allow himself to stare too closely at. “You have to operate assuming it will work out,” he said. “You don’t want to consider the possibility that your child will die.”

Louisa’s cancer was much harder for Sean to cope with than his own. “I felt in some way that I was in control of my own survival .... I didn’t know how to deal with my child having leukemia,” he said. “All the books about raising kids don’t include how to deal with it if your child gets what could be a life-threatening illness.”

When Louisa was in the hospital, both Sean and Laurel cut back their work schedules to part-time. When colleagues wondered why he was working at all, he told them he found solace at work. It was one place where things made sense.

Friends from work also helped comprise the net of support that held his family up. Many visited them in the hospital. Others brought food. Each Friday, Louisa’s friends from the Boys & Girls Club would bring her a music video they made to make her laugh.

“You suddenly realize you have this amazing community—and you had no idea,” Sean said, his eyes filling with tears. “And the idea of community is also the people who donate blood products, who give up stem cells. They don’t know us. They don’t have to, but they do it.”

When Louisa had her transplant, friends made posters counting down each day until she could go home. They are framed now and hang in the family’s renovated garage next to the pool table and her drum set. “When you are broken, your family and friends are the glue that bonds you,” reads one.

In 2014, Louisa is a healthy 16-year-old high school sophomore who plays bass in the drum line and loves rock climbing. Her transplant cured her leukemia and, after spending a year in the more sterile environment of the Hutch School, which serves patients and families of patients, she was able to return to her school.

These days, both father and daughter are looking to the future and embracing the luxury of normalcy. While Sean was in the hospital last Father’s Day, this year his daughters cooked for him, and he revels in just having time with his family, especially as his girls grow older. “I cherish the moments we have with all of them,” he said.

His perspective has shifted. When you’ve faced the biggest losses, the smaller things can recede into the background. And while you wouldn’t choose to learn it, you also know how much you can survive. “For Louisa and me, I know now that if no one in this moment is actively dying, we can work it out .... We can figure out what we need to do and move on,” he said. “If there’s traffic, we can be a little late. It’s OK. No need to get tense.”