SCCA President elected to 2017 Class of Fellows of AACR Academy 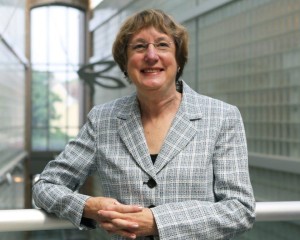 Dr. Nancy Davidson, SCCA Executive Director and President[/caption] The American Association for Cancer Research, or AACR, announced that Seattle Cancer Care Alliance’s Dr. Nancy Davidson, an internationally acclaimed breast cancer oncologist, is among its newly elected class of Fellows of the AACR Academy. Davidson is the president and executive director of SCCA. She also serves as vice president and director of the Clinical Research Division at Fred Hutch, and AACR’s president. She is among 12 members of the new class from the U.S. and around the world who, according to an AACR statement, “have made quintessential scientific discoveries that have and continue to revolutionize how we study, treat, and prevent cancer.” “It is a special honor to be selected as a Fellow of the AACR Academy,” Davidson said. “I am both humbled and thrilled to join this illustrious group of researchers who are united in their passion to make a difference in the battle against cancer.” Her research has teased out the role of hormones in breast cancer growth and she has had a major impact on the development of new standards of care that exploit the Achilles’ heels of breast cancer cells. Davidson’s team was the first to describe how the activity of one of the estrogen receptor genes is regulated by epigenetic factors that affect how the DNA code is read and eventually translated into proteins. She also has contributed foundational research to our understanding of how estrogen deprivation and other therapies trigger breast cancer cells to kill themselves through apoptosis, or programmed cell death. Her lab studies paved the way for new clinical trials of drugs that exploit these pathways to kill breast cancer. She has also led several critical clinical trials that have advanced the care of breast cancer patients, for example, establishing a combination chemotherapy and hormone therapy regimen for premenopausal women with the disease. In addition to her leadership roles at SCCA and Fred Hutch, Davidson is professor and head of the Division of Medical Oncology of the University of Washington School of Medicine. In these roles in the Fred Hutch/UW Cancer Consortium, Davidson serves as a bridge builder across the cancer treatment, clinical, translational, basic sciences and public-health research programs of consortium members SCCA, Fred Hutch, UW School of Medicine, UW School of Public Health and Seattle Children’s. - Kristin Woodward / Fred Hutch News Service
Tags ·
breast cancer
,
cancer research
,
fred hutch
,
Fred Hutchinson Cancer Research Center
,
research
,
UW Medicine
,
UWMC