Green is a clinical researcher with SCCA's partner organization, Fred Hutchinson Cancer Research Center, where he will test a multiple myeloma treatment that uses a powerful but elusive radioactive particle to deliver immunotherapy to tumor sites throughout the body. 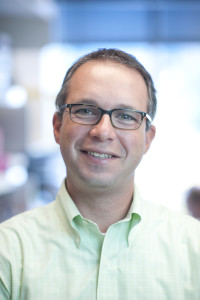 “If successful, the treatment would provide a unique approach that could benefit the 30,000 people each year diagnosed with multiple myeloma and could potentially be adapted for other cancers,” Green said. Multiple myeloma is a cancer of the plasma cells, which are found in the bone marrow and play a crucial role in the immune system.

The new grant comes at a promising time for multiple myeloma, a generally incurable disease. Treatments approved by the U.S. Food and Drug Administration since 2003 have extended survival to about seven years, which is an improvement from the historical two- to three-year survival rate. But long-term, complete remission evades most patients.

Despite high rates of initial response to treatments, almost all patients relapse even if the cancer is undetectable by traditional methods.

“Therapies knock back the disease but it still returns, often as a consequence of a very small number of remaining tumor cells also known as minimal-residual disease,” said Green, who’s also an assistant professor in the University of Washington School of Medicine.

Minimal-residual disease is identified through very sensitive testing that detects small pockets of cancer cells throughout the body that presumably did not respond to treatment and remain behind to ultimately flourish.

To target those leftover cancer cells, Green, along with SCCA’s Dr. Oliver Press and their colleagues in Radiation Oncology at UW Medicine have been investigating how to deliver radiation directly to the diseased cells to essentially zap them on the spot.

“In rare cases, [when] the same cells that are found in myeloma show up in just one area of the body, that condition is potentially curable with traditional external-beam radiation,” Green said. “This demonstrates that these cancer cells can be eliminated by radiation if we could get it to all of them, but with multiple myeloma, the disease is throughout the bone marrow and often elsewhere, so you can’t safely give traditional radiation to all those sites in the body.”

For the past 30 years, the research team has been figuring out how to directly target radiation to cancer cells. They have turned their focus to a high energy, alpha-emitting particle, since it is very good at giving a “local killer punch,” Green said.

But the trick is getting the particle close enough to the cells. Alpha emitters are slippery: They can’t just be linked to any molecule, and there hasn’t been a way to attach the radiolabel onto an antibody to home in on cancer.

The UW Medicine collaborators created a cage consisting of 10 boron atoms to encapsulate the alpha particle, then, with Green, they attached the cage to the CD38 antibody, which hunts down the CD38 receptor prevalent on myeloma cells.

“The alpha particle can’t go through a piece of paper,” Green said, “but it can deliver its payload through the boron cage and travel one to two cells in diameter to enable a targeted, localized attack.”

With the NCI funding, the researchers will embark on a clinical trial, which they aim to open in 2018. The trial will involve giving the antibody tagged with the alpha particle to multiple myeloma patients in combination with a standard type of chemotherapy, melphalan, as preparation for a stem cell transplant.

First, though, the researchers will spend the next year making the reagents necessary for the trial, using the Biologics Production Facility at Fred Hutch, and then seek FDA approval.

For Green, this project gives more hope for the multiple myeloma patients he sees.

”We’ve kicked the can down the road with all the great new therapies, but my patients still need a breakthrough,” he said

“The reason I love this place is it provides the opportunity to engage in collaborative translational work,” Green said.