The U.S. Senate's approval of the 21st Century Cures Act will help drive the top goal of the Cancer Moonshot ― speeding development of new cancer cures, said Dr. Nancy Davidson, president of the American Association for Cancer Research, or AACR, and president and executive director of Seattle Cancer Care Alliance. 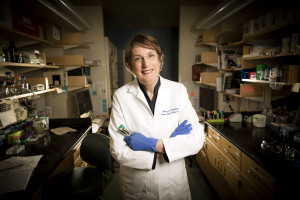 The Senate passed the bill in a 94-five vote. The House passed a nearly identical version on Dec. 1, voting 392-26. President Barack Obama, who said the Cures Act brings the world "one step closer to ending cancer as we know it," is expected to sign the bill into law.

The bill provides $4.8 billion in funding to the National Institutes of Health to pay for an array of medical research programs, including $1.8 billion over seven years to bolster cancer science through the Moonshot, an initiative launched and led by Vice President Joe Biden. Senators also approved an amendment to rename the Moonshot portion of the bill after Biden’s son, Beau, who died from brain cancer in May 2015. It is now called the Beau Biden Cancer Moonshot.

"This targeted, multi-year funding will help support the 10 cutting-edge scientific recommendations identified by the National Cancer Moonshot Initiative Blue Ribbon Panel for realizing the Vice President’s goal of achieving 10 years of progress within the next five years," Davidson said in an AACR statement co-authored by Dr. Margaret Foti, chief executive officer of the AACR.

They specifically called out Sen. Patty Murray (D-Washington) and Sen. Lamar Alexander (R-Tennessee) for their "leadership and unwavering commitment to ensuring the passage of the bill."

"The 37,000 members of the AACR, who are laboratory researchers, physician-scientists, other health care professionals, and patient advocates, look forward to President Obama signing this legislation into law, and we stand ready to work with next year’s Congress and President-elect Trump’s administration to continue our efforts to seize on the unprecedented opportunity to accelerate the pace of our scientific efforts for the benefit of the millions of Americans and their loved ones touched by cancer," they wrote.

The Cures Act also provides $1.4 billion for the Precision Medicine Initiative. That Obama-backed project aims to collect genetic data from 1 million U.S. volunteers. That information is intended to be used to create new treatments.

Davidson joined SCCA on Dec. 1. She is also senior vice president and director of the Clinical Research Division at Fred Hutchinson Cancer Research Center; and professor and head of the Division of Medical Oncology of the University of Washington School of Medicine.