Randy was diagnosed with multiple myeloma after the markers in his blood work from a health exam indicated he had cancer. He was treated with chemotherapy at SCCA, traveling 200 miles round trip for his appointments from Lynden, Washington. 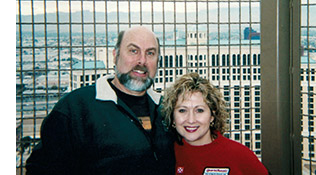 What happens when a truck-driving, horse-packing country-music singer gets a cancer that breaks his back in eight places? If his name is Randy Edin… he gets better.

Randy’s battle with multiple myeloma began in the autumn of 2015. After working 40 years driving 18-wheelers, he was looking forward to retiring when he became eligible for Social Security the following June. He went in for a pre-retirement health work-up, and markers in his blood indicated that he had cancer. As it turned out, the back pain he’d been experiencing was caused by multiple myeloma attacking his spine.

"We wanted the best treatment we could get"

Randy and his wife Roxanne live in Everson, Washington. It’s a small town just a few miles from the Canadian border. “I had never heard of multiple myeloma before. We were scared to death,” says Randy. “Roxanne said to the doctor, ‘I think maybe we’ll go to Seattle.’ We wanted to see a specialist. We wanted the best treatment we could get.”

Roxanne contacted Seattle Cancer Care Alliance (SCCA) and made an appointment with hematologist Edward Libby, MD. By this time, the disease had caused eight compression fractures in Randy’s spine. He was in intense pain and could barely walk. Dr. Libby told him, “I’ve only seen that kind of damage in car crashes.” At the same time, Dr. Libby reassured Randy that he had treated many cases of multiple myeloma and explained the treatment protocol he thought would work best. This was just what Randy and Roxanne needed to hear. “He was spot-on with what he did for me,” Randy recalls. “I just love the guy.”

Dr. Libby decided the best option for Randy was a research study using chemotherapy with an option for an autologous stem cell transplant, followed by on-going treatment with lenalidomide, known by the brand name Revlimid® (an immune-system-modulating drug).

Dealing with disease, pain and depression

For eight months, from March through November 2016, Randy made frequent trips to SCCA for treatment. Just travelling by car caused back pain so severe that Randy had to quit his job. Roxanne also quit hers in order to devote all of her time and attention to caring for him. One of their daughters, who lives in Lynden, made herself available to drive the 200-mile round trip to Seattle and back — for every appointment. His other daughter lives in the Seattle area and she came to each appointment to take notes.

Even with all of this help, Randy admits it was hard to cope. “When you’re lying in a hospital bed and they’re doing all this stuff to you, all you want to do is go home,” he says. “I thought when I got home, I’d feel just fantastic. Everything was going to be fine… Well, I got home and nothing changed. I could hardly walk. There were all these things that I wanted to do for myself, but I couldn’t. I was pretty depressed. It took a long time before I was able to get back to work — and then I snapped out of it.”

Getting his life back

However, the treatment was working, and Randy got help at a rehabilitation center in nearby Lynden, Washington. Working out on an “anti-gravity” weight-bearing treadmill gradually enabled him to build up the strength to walk on his own again. After 10 months, he drove again for the first time since he’d quit his job. And he learned to control his back pain without medicine: Lying down with heat for 10 minutes is now all he needs.

Randy remembers with pleasure the first time he walked into the clinic without assistance and without pain. Dr. Libby smiled at him and said, “It’s unbelievable how you responded to this.” He also added a note of caution, telling Randy that even though there were no multiple myeloma markers in his blood, “It’s still there. This disease never goes away, so we’ll have to be vigilant.”

Randy says he’s fine with that. His stem cells are frozen and stored in a vault at SCCA, so there’s always the transplant option. “I’m a glass-half-full person,” he reflects. “I feel very fortunate that they found it when they did and that I’m as healthy as I am. I can do things, rather than being stuck in a wheelchair.”