Some might say she was at the peak of health and fitness. The prior summer, Ali Spain completed the TransRockies Run, a six-day ultra trail race that covered 120 miles at elevation in the Rocky Mountains. Then at the age of 47, her breast cancer diagnosis changed everything.

Some might say she was at the peak of health and fitness. The prior summer, Ali Spain completed the TransRockies Run, a six-day ultra trail race that covered 120 miles at elevation in the Rocky Mountains.

Then at the age of 47, her breast cancer diagnosis changed everything. “I was shocked,” Ali says. “At the time I was very healthy and fit. I was a runner, and had no family history of cancer. But that was the reality.”

The first sign was a small lump under her armpit that she noticed in June 2013. It wasn’t painful so Ali didn’t think anything of it, but by August it had grown significantly. She went to her primary care physician at the UW Neighborhood Clinic in Woodinville, who quickly referred her to Seattle Cancer Care Alliance.

Ali was diagnosed in September with triple negative breast cancer, an aggressive cancer that makes up about 12 percent of all breast cancer cases.

Because of the aggressive nature of her cancer, Ali’s care team decided on a multi-step, coordinated approach to treatment

In addition, Dr. Gadi suggested that Ali participate in a clinical trial of an oral chemotherapy treatment, something she would have never considered. “I had always thought that trials were for patients on their final treatment option,” she says. “I was happy to find [and] provide some benefit for the bigger cause in going through my treatment … If I could help advance the cause and contribute to a cure someday, I was happy to do so. I was also happy to attack my cancer with all the ‘tools in the toolbox.’”

“I think I had a misconception that clinical trials were for patients who were on their third of fourth treatment option. But they’re not, so I took advantage of that.
Not only because it made me feel like I was using all the tools in the shed, but I felt like I was giving back.”

The trial lasted three months and Ali took a pill weekly on her infusion day. The commitment was minimal since it didn’t require an additional procedure or special trip to the clinic. Ali also participated in an imaging research study during her treatment. The study involved six additional PET and MRI scans as well as a core biopsy midway through her five months of chemotherapy. This required extra time and commitment on her part, but Ali says she didn’t mind since she knew she was contributing to research.

“It also gave my care team more insight into the shrinkage of the tumors, which gave me peace of mind knowing the chemo was working,” she says. “If I was not on the [imaging] research study I would not have gotten that information until the end of the chemo scan.” 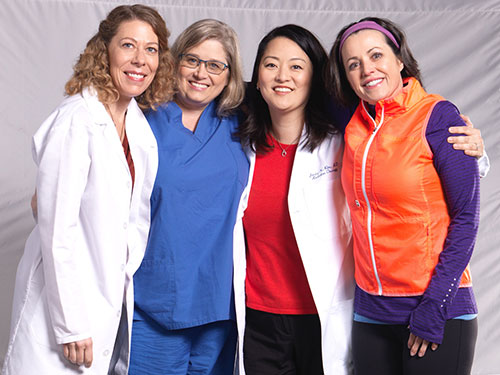 Ali Spain and her care team

Ali experienced common side effects from chemo and radiation. She had hair loss as well as fatigue and loss of appetite. She also experienced neuropathy (numbness caused by chemotherapy) in her hands and feet, which meant no running.

“I continued to work, but because I worked for myself at the time, I could manage a very flexible schedule,” she says. “I took a couple days off after each chemo day, which I think were about 16 to 18 infusions over five months. I also worked from home much of the five months.”

Ali’s care team encouraged her to keep active even during treatment. Shortly after her mastectomy, she began running again and continued doing so during radiation. “Running is my ultimate freedom,” she says.

Ali continues to see both Dr. Gadi and Dr. Kim every six months for check-ups — something she’ll continue to do until she’s five years out from treatment.

She is also now in the process of selling her business and plans to take some months off and decide what’s next. “I’m not sure where I’ll land, but I do know my next chapter will involve more creativity and balance – two things that were missing in my pre-cancer life.”

For now, she is cherishing time with family and friends. She says cancer brought her closer to her family. Ali is looking forward to being active with her now 12-year-old daughter and while she is no longer running long distances, it continues to be a big part of her life. She is set to do a three-day run in California with some girlfriends in May.

“Our bags are transported for us and we run from one inn to the next on trails along California’s coastal hills,” she says. “A bit of a luxury trek … this is just my speed now.”

“I still have a hard time even aligning myself with cancer, even when going through treatment I felt like I really didn’t belong in this category,” Ali says. “So I guess I do feel cured, as I know I’m going to die someday at a ripe old age, but it won’t be of cancer, ever.”