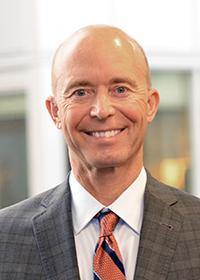 “We’re lucky to have Seattle Cancer Care Alliance (SCCA) in our backyard,” said Scott Lundberg, a survivor of non-Hodgkin lymphoma (NHL). Scott is a plaintiff’s personal injury lawyer who talks to many doctors in the course of his work. He is also a long-distance athlete whose strength and endurance proved invaluable during cancer treatment.

During his training for the 2010 Dallas Marathon, Scott noticed persistent soreness in his left groin. Months later when a lump began to form in the area, he decided he’d better seek medical advice.

“But I didn’t have a doctor,” said Scott, who was 49 at the time. “So I went to see my uncle’s internal medicine doctor. He thought I had an infection and put me on antibiotics, twice.” When these didn’t work, Scott went back to the doctor, who suggested he get a computed tomography (CT) scan. “I also suggested I get a biopsy,” Scott said.

In December 2010, Scott had the biopsy he asked for, and a week later he got the results. “My doctor called me on Friday night at seven,” Scott said. His diagnosis was NHL.

Not one to sit around on a weekend, Scott got to work researching doctors in the Seattle area and found SCCA. “I called that weekend and left a message,” he said. “SCCA called me back on Monday, and I was in on Tuesday seeing Dr. Ajay Gopal, a medical oncologist. Dr. Gopal was great. He was compassionate yet professional and candid about the process and probable outcomes.”

Going the Distance to Treat NHL

When you’re a marathon runner, half-way won’t do. You train for the full 26.2 miles, and with proper preparation and a little luck, you complete that distance, no matter your speed. It’s finishing that counts. Treating his cancer was no different for Scott and his wife, Charleen, also a competitive athlete.

“There was a choice for me to do a medium-level chemo or a heavier-duty chemo,” Scott said. “I chose the heavy-duty chemo to get the greatest chance of cure, which was Dr. Gopal’s recommendation. There’s something to be said for hitting cancer hard at the get-go. You have the greatest chance of success when you’re strongest, before the treatment starts to wear you down.”

“I explained to Scott that this cancer had a specific genetic abnormality that would make it harder to cure,” said Dr. Gopal. “I offered him the choice of a more intensive regimen with the hope to overcome the poor prognosis, and he took it on as a challenge.”

Scott had a regimen of rituximab (Rituxan) with hyper-CVAD, also called R-hyperCVAD or R-HCVAD. (Hyper-CVAD is shorthand for hyper-fractionated cyclophosphamide, vincristine, doxorubicin, and dexamethasone.) This combination of a monoclonal antibody, three traditional chemotherapy drugs, and a corticosteroid is “quite intense,” said Dr. Gopal.

Longest Marathon of His Life

Scott endured eight rounds of chemotherapy infusions, each on a 21-day cycle that included five days in the hospital at University of Washington Medical Center. With each cycle he also had a lumbar puncture to inject chemotherapy into his cerebrospinal fluid to prevent cancer in his CNS.

“After the chemo treatment, around day 10 to 11, the white blood cell count gets close to zero, which is the goal of treatment. Then, in days 12 to 21, the white blood cells recover and rebuild. Your count goes up to an acceptable level. Then you start to feel better actually,” Scott said. “But then they start the cycle again.”

By rounds three, four, and five, Scott was getting transfusions of red blood cells and platelets, because these cells were also destroyed by his chemo.

“I felt like I was in a bad dream for a long time,” Scott said.

After his fourth round of chemo, a positron emission tomography (PET) scan was clear of any signs of cancer. His lymphoma appeared to be gone. “But I still had to do the entire treatment regimen,” Scott said, to wipe out any undetected cancer cells that might remain. That meant completing the four final rounds. He had to finish his chemotherapy marathon, no matter how challenging.

Scott wasn’t troubled by nausea at all, which surprised him. What did trouble him was how exhausting chemotherapy was. By July 2011, when his treatment ended, he barely had enough strength or energy to walk.

Working out and running were huge parts of Scott’s life before cancer. Charleen, who completed her first half-Ironman during Scott’s treatment, wanted to make sure they would be again. The extra weight he had gained while on chemo was good for him at the time, she thought, but not so good for his overall health afterward. So she encouraged him to ease back into exercise.

At first Scott wasn’t even ready for a 5K. But he slowly rebuilt his strength. Eventually, his wife’s successes motivated him to try triathlons. He learned the arts of swimming in open water and bicycling for miles on end. It didn’t take long for this new passion to grab hold.

Together the couple competed in a triathlon in Austin, Texas, and then the Canadian Ironman in 2013 and 2014. Typically, they stagger their athletic events since they have children and Scott has his law practice. “All I do is take care of kids, work, and train,” Scott said. “It’s something I can control.”

Scott’s cancer is gone. He is considered cured. “I feel better today than I did at 25,” he said. “I’m told that being in shape for treatment definitely helped me. But the best outcomes come for those who are involved and educated. Converse with your doctors. It can be hard, because they are intimidating and because of their stature, but you have to break that down to be a team.”