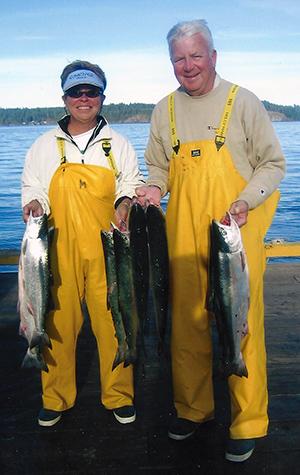 Mike with his wife, Linda.

Mike Casey is a doctor. He’s practiced occupational health and was a flight surgeon providing primary care for aviation crews during his 30 years of military service.

Dr. Casey is also a patient. In 2009 he was being seen at Madigan Army Medical Center in Tacoma, Wash., for high blood pressure, low level of red blood cells, and low iron stores.

Then his wife, Linda, began to notice that Mike, who was just 65 years old at the time, was more winded than usual on the walks they often took together in the evening and on weekends. Linda encouraged him to talk to his doctor about it, so he saw a hematologist-oncologist at Madigan as part of his workup. That doctor performed a bone marrow biopsy, which identified the culprit of Mike’s breathlessness.

A matter-of-fact kind of guy, Mike’s jaw dropped when he got the news that he had a very rare form of non-Hodgkin lymphoma (NHL) called Waldenström macroglobulinemia, or lymphoplasmacytic lymphoma.

“We’d never heard of Waldenström,” Mike said of his new diagnosis. “It’s really rare. They call it the ‘old white man’s disease’ because it was described by a Swedish oncologist, Dr. Waldenstrom, and most of his patients must have been old white men.”

Mike’s hematologist-oncologist at Madigan sent him to Seattle Cancer Care Alliance (SCCA) to see Ajay K. Gopal, MD, who specializes in treating lymphoma. Mike understood that major medical centers have more experience with rare diseases and often conduct studies testing new treatments for them. He was happy to make the trek north to Seattle.

“I tolerated the treatment well,” Mike says. “I didn’t have any nausea or vomiting and had only a little bit of hair loss.”

Mike completed six cycles and then started rituximab maintenance a year later and took it for about a year. “It’s a hard disease to get into remission and keep in remission,” Mike said. When rituximab was no longer effective, they looked for another option.

At Dr. Gopal’s recommendation, Mike enrolled in a clinical study of a drug called CAL-101, now known as idelalisib. This consisted of a low-toxicity pill that Mike could take orally. It targets the B-cell signaling pathways of the cancer cells. These pathways are chain reactions of enzymes inside the cancer cells that encourage cancer cells to grow and spread. The drug has very few side effects compared with chemotherapy, and patients can take it indefinitely, according to Dr. Gopal. It turned out to do the trick for Mike. At 150 milligrams twice a day, idelalisib has been keeping Mike’s non-Hodgkin’s lymphoma in remission with relative ease.

The clinical study at SCCA is now in the follow-up phase, meaning it’s closed to new participants and researchers are following those who enrolled earlier. Based on preliminary data presented to physicians at the June 2013 meeting of the American Society of Clinical Oncology, the researchers concluded that idelalisib is remarkably effective and safe as a treatment for well-defined, heavily pretreated, highly refractory patients who have indolent (slow-growing) NHL.

Living as a cancer survivor

“Waldenström is an incurable disease,” Mike said. To control it, he’ll be able to continue taking idelalisib until the drug stops working — which doctors expect could happen eventually as his disease adapts. The next step could be an allogeneic bone marrow transplant to further extend his life.

“I worked full time for a few years after my diagnosis. But in 2012, I reduced my hours to part time. In 2013, we’re both trying to stick to retirement,” he said. Overall, Mike feels he’s living the normal life of a retiree, traveling and taking walks with Linda.

Mike gets computed tomography (CT) scans quarterly to keep watch for any signs of recurrence. During one of these scans, in the fall of 2012, a potentially cancerous pulmonary nodule was detected on one of Mike’s lungs. “The doctors watched it,” Mike said, “and when it changed a little I went to UW Medical Center and [surgeon] Mike Mulligan removed it.” Michael S. Mulligan, MD,  is a professor of cardiothoracic surgery at the University of Washington School of Medicine. If Mike hadn’t been getting quarterly scans because he was enrolled in the idelalisib study, his nodule would likely not have been found until much later, Mike said.

Throughout his treatment, Mike has never been hospitalized, but he has had a lot of interaction with the health care system from a patient’s perspective. “It was interesting to be on the receiving end of medicine,” he said.

Mike and Linda have lived in many places around the world. With Mike’s disease stable, they plan to continue traveling and enjoying their retirement.