Karen Allen will tell you that she’s a married, middle aged, middle income, mother of two. Her friends might tell you she’s also a biker chick. What you won’t readily know from either perspective is that she’s been faced with cancer — not once, but twice. 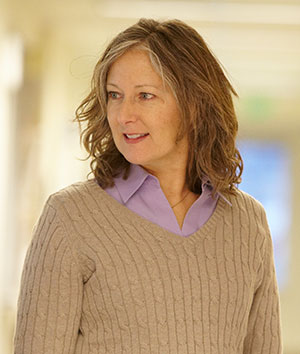 Karen Allen will tell you that she’s a married, middle aged, middle income, mother of two. Her friends might tell you she’s also a biker chick. What you won’t readily know from either perspective is that she’s been faced with cancer — not once, but twice.

Today, she is living well with follicular non-Hodgkin lymphoma and is a breast cancer survivor.

It all began in June 2008. Karen was 47 years old and feeling tired — really tired. Employed by the Wenatchee School District, Karen figured her busy life gave her plenty of reasons to feel tired, with a full-time job and two teenaged daughters. She figured she was just getting old. Yet, one day in the shower Karen saw several lumps along her rib cage and knew that she had to see her doctor that day.

Karen’s doctor told her that it could be lymphoma. She was sent to the hospital for a fine needle biopsy and a few days later she met with an oncologist who said her lymphoma was probably follicular non-Hodgkin lymphoma (FNHL). Other diagnostic tests showed Karen’s disease was stage IV, which meant she had widespread lymphoma in her lymph nodes and at least one other organ, such as the bone marrow, lungs and liver. FNHL is often diagnosed in later stages because it is an indolent cancer and can be very quiet.

Because of Karen’s overall excellent health, her oncologist in her hometown wanted to watch it and wait to begin treatment. Watching it progress seemed counter-intuitive to Karen.

"A cancer diagnosis is difficult news, but to me, the suggestion of not immediately treating my disease was like a punch in the stomach,” Karen says. “I went looking for more information.”

Treatment on a clinical study

At Seattle Cancer Care Alliance (SCCA), Karen saw Ajay Gopal, MD, who explained the latest data and the standard approach for this type of lymphoma. “He also told me about a clinical trial,” she says.

Karen and her husband, David, decided to move forward and participate in a study taking Rituximab and a vitamin A derivative that synergizes with Rituximab. “Within the clinical trial, my lymphoma would end up being treated much like a chronic disease,” Karen says. “I wanted to switch to a proactive approach instead of all the internal pressure of watch and wait."

Karen had her first infusion of Rituximab the day before Thanksgiving 2008. She went to SCCA once a week for four weeks and then went to a quarterly schedule after that. Within three months, she was feeling better — “remarkably normal,” she says. “Maybe it was psychosomatic, but I don’t think so. Regardless, I’ll take it!”

Later that month, Karen began treatment with Fenretinide, as Karen says, “great orange horse pills.” She took 32 of them every day. Sixteen in the morning and another 16 at night. “At first, I thought taking so many large pills was an impossible task, but it quickly became easy. My girlfriend, who’s a nurse, laughingly suggested they were suppositories!”

As a participant in the clinical trial, she received a PET CT (positron emission tomography with computed tomography) every six months to monitor her disease, along with blood draws and bone marrow biopsies before each infusion. Again, what initially seemed daunting became easier with time.

At the end of 2013, Karen stopped taking Fenretinide because the clinical trial was closing. She enrolled in a new clinical trial and began taking Ibrutinib in April 2014. Ibrutinib was approved by the US Food and Drug Administration in November 2013 for lymphoma. Karen takes four pills daily.

Today, her lymphoma remains stable. Sometimes when caught at earlier stages, this type of lymphoma can be cured. However, there is no cure for Karen’s stage of disease. “With my lymphoma being treated much like a chronic disease, I feel a sense of control,” Karen says.

Eventually, her disease may transform into a more aggressive B-cell form of cancer. “When that happens, I might get the hallmark night sweats and feel puny,” Karen says. “And then we’ll treat that cancer and learn more about a bone marrow transplant at that time, too.”

On a routine mammogram that occurred on the same day as a regular check-up for her lymphoma, a small “spot” was found in Karen’s breast. It wasn’t anything alarming but the next year for her annual mammogram, the spot had grown and it was suggested she have a biopsy. In March 2015, Karen was diagnosed with breast cancer. Her specific diagnosis was invasive ductal carcinoma, stage 1, estrogen and progesterone positive, HERS 2 negative.

“I had so many feelings,” Karen says of the second diagnosis. “Initially, ‘Here we go again’ … ‘How could I be so unlucky?’”

With her experiences at SCCA for her lymphoma, Karen had no doubts that she would receive treatment for her breast cancer at SCCA as well. “I felt confident of the treatment I received at SCCA,” she says. “I knew I would plug into the resources.”

No one has suggested that there is a correlation between Karen’s lymphoma and breast cancer. And, while it was a concern for her at first, having lymphoma did not limit the treatment path for her breast cancer.

At the end of April, Kristine E. Calhoun, MD, performed Karen’s lumpectomy to remove the cancer. A 21-day radiation plan followed in June, which was performed back home in Wenatchee at Confluence Health.

“Everyone collaborated with everyone,” Karen said of receiving treatment at SCCA and Confluence Health, an SCCA Network site.

Because estrogen feeds the type of breast cancer Karen has, she is also taking an aromatase inhibitor. This blocks the estrogen, and is a drug she will need to take for five years.

Karen didn’t have any of the “typical” side effects from her breast cancer treatment. She did not lose her hair. She didn’t have to get a port. “I’m here and I’m doing really well,” she says.

In the spring of 2009, Karen took up motorcycle riding as a way to renew herself from her first diagnosis of lymphoma. Riding brought her many new friends as well as a way to give back to her community. In the summer of 2010, she and other motorcyclists fundraised more than $34,000 for breast cancer—before knowing of her own future breast cancer.

These days Karen is still riding and working at the Wenatchee School District. While she had to limit herself to shorter rides in the summer after her radiation, she did take a trip to Yellowstone. Now she is looking forward to going on multi-day and multi-state rides.

“I got a lot of horse power,” she says of an upgraded engine to her motorcycle. But, you could say the same on her outlook of life.