After experiencing back pain for years, King County Superior Court Judge Mike Heavey was diagnosed with non-Hodgkin lymphoma. He was treated at SCCA and since being in remission has taken up hiking with friends, including multiple climbs to the top of Mt. Rainier. 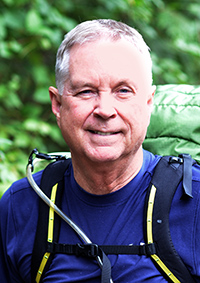 King County Superior Court Judge Mike Heavey had back pain for years. In 1987 he had his spine fused to try to relieve the discomfort, but by the late ’90s he couldn’t even wash his car because his back hurt too much. It was severe back pain that made Mike head to the emergency room (ER) on March 16, 2003. However, this pain wasn’t the normal pain he was used to feeling; it was something new. “I thought it might be a kidney stone,” Mike recalled.

The ER doctor did a computed tomography (CT) scan, and the cause of Mike’s pain was quite clear. The lymph nodes that outlined his spine were all enlarged. “They had exploded,” Mike said. He left the hospital the next day with a diagnosis of lymphoma. A week or two later he would learn more details: He had B-cell follicular non-Hodgkin’s lymphoma (NHL).

“I wish it had been a kidney stone,” he said. “It was so surreal. I was enjoying life. But the fear—I prayed I’d make it to my daughter’s high school graduation, which was five years away.”

Mike’s primary care physician referred him to the office of a local oncologist where Mike began the standard treatment for his disease with fludarabine (Fludara) chemotherapy, prednisone, and rituximab (Rituxan), a monoclonal antibody that works by attaching to certain B-cells in the immune system and killing them.

The chemo gave Mike an overall mild red flush to his skin. The rituximab made him feel tired. Each treatment took five hours from start to finish. At his first treatment location, before he moved to Seattle Cancer Care Alliance (SCCA), he was infused with rituximab in its chilled state. “At SCCA they at least warmed it up first,” Mike said. “That treatment chilled me through to the bone.” Of the treatments Mike received, prednisone gave him the most trouble by far. His side effects included sleeplessness, jitteriness, and a “general feeling of yuck,” he said.

“When I asked my oncologist who he would go to for a second opinion,” Mike said, “he told me Dr. Press.” This was interesting to Mike, who had seen Oliver W. Press, MD, PhD, speak at a meeting about NHL. Dr. Press is a member of Fred Hutchinson Cancer Research Center and a professor of medical oncology at the University of Washington (UW) School of Medicine. He specializes in treating people with blood cancers, and his name came up whenever Mike asked an oncologist who they would see if they had NHL. “I now know why,” Mike said.

In a strange coincidence, Mike’s oncologist was diagnosed with cancer himself and reduced his practice. Mike needed to find a new oncologist and decided to switch to Dr. Press.

When Mike received his diagnosis for NHL, he decided he was going to do all that he could to get better. “I was going to maximize my ability to heal,” he said. In addition to standard Western medical care, Mike read that diet had a lot to do with spontaneous remissions, so he changed the way he ate, replacing processed foods with fresh fruits and vegetables, and coffee with green tea. He prayed to maximize the spiritual side of healing as well. “We all have a higher essence down deep, a healing force inside of us. Praying and meditating helps connect with that force,” Mike said.

Looking back at his 30-year history of back pain, Mike said, “I was a fairly intense person before being diagnosed with cancer. My intensity ended up as pain in my lower back. By letting go with meditation and prayer, I was able to let my skeleton support my body. I was treating the cause—not the symptom—and my back pain went away.” According to Mike, his friends say he is now quite “Zen.”

Though his type of cancer is considered incurable, Mike has been in remission since 2003 without a single relapse. The average relapse time for NHL is three years. He sees Dr. Press for annual check-ups now. “Hopefully I’ll die from something else,” he said.

In 2006 at the age of 59, Mike climbed Mt. Rainier for the first time. “I had started hiking with friends after my cancer went into remission and my back pain went away,” he said. “I made friends with Mt. Rainier climbing rangers who occasionally took me to the top of Mt. Rainier on their days off.”

Mike climbed Rainier every year for five years. He has summited Mts. Hood and Baker in Washington and Grand Teton in Wyoming. In 2013, he climbed to the “Roof of Africa,” the 19,340-foot Mt. Kilimanjaro in Tanzania. “I like to climb because it means I’m healthy,” Mike said.

Mike retired after 12 years as a King County Superior Court judge in January 2013. He spent 14 years in the Washington State legislature before becoming a judge, eight years in the House of Representatives and then six years in the Senate. Mike never lost an election when he ran for the House or Senate, but “I lost elections for Seattle City Attorney and King County Council,” he said.

“Any tragedy or disappointment has a learning potential. You learn more from a loss than you do from winning. Getting cancer may have been the best thing to ever happen to me,” he said. “It brought about a need for me to make some changes. Once you make those changes, it’s easy. It becomes the new normal.”

He doesn’t spend a lot of time wondering where his cancer came from. He doesn’t have any cancer in his family, but he speculates his exposure to Agent Orange in the Vietnam War may be the cause of his disease.

“I invite anyone who’d like to talk about my cancer experience or how to get over a bad back to contact me,” Mike said. His email address is sen34@comcast.net.