Paul Weigel was treated with chemotherapy, radiation therapy and surgery after being diagnosed with colorectal cancer at age 43. 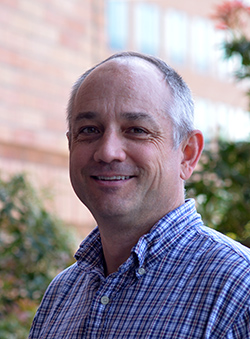 Paul Weigel spent most of his 20s leading a sedentary life. He was a workaholic, too, until he caught the exercise bug when he and a buddy made a $5 bet on which of them would win a 5K race. (Paul beat his friend and has left him in the dust ever since.)

That event changed his life. “I found that I really liked being active and started running more and more. The next thing I knew, I was running marathons, climbing mountains, and participating in triathlons. I was even leading hikes with my friends on a weekly basis.”

All those activities were great for Paul’s heart and waistline but were hard on his hips. Eventually he had one hip and then the other replaced. The hip-replacement process involves getting a full physical to make sure your body can withstand surgery. During the physical for his second hip replacement, at 43, Paul reminded his doctor about blood in his stools. He’d told the doctor this before in other physicals, but the doctor had told him not to worry about it—Paul was young and healthy.

After his surgery, Paul began to experience real trouble. Not with his hip, but with his gastrointestinal (GI) system. “I had to give myself an enema shortly after going home from the hospital,” Paul said. “It seemed that the anesthesia had really slowed my system down to where nothing was moving. I was in a tremendous amount of pain.”

Paul decided to see a GI specialist, who said his blood work was fine. It was during the colonoscopy—“the best nap of my life,” Paul said—that the doctor discovered major trouble. The exam had to be stopped midway because a tumor was blocking the path of the scope.

Appointment with the “Army” for Colorectal Cancer

Paul wasn’t quite six weeks post hip surgery when his gastroenterologist referred him to a local oncologist with a diagnosis of colorectal cancer.

“I went to the appointment, but it felt like I was meeting with a scout troop,” Paul said of the doctor and colleagues he saw near his home. “If I was going to win this battle, I needed an army behind me. That’s when we decided to go to Seattle Cancer Care Alliance (SCCA).”

“We believe that colorectal cancers are best managed with a team approach that incorporates the expertise of all of these specialties,” Dr. Kim said.

“I felt like they had the breadth and depth of experience that I needed to win this war,” Paul said. “They were a whole team under one roof with the most current and up-to-date tools, expert specialty doctors, and an outstanding, comprehensive organization down to the front desk. I knew I’d be taken care of.”

Treatment started immediately, beginning with 28 days of radiation and oral chemotherapy. “Radiation and chemotherapy were used before surgery to try to shrink his tumor, which was located between the juncture of his rectum and colon, and also to sterilize any tumor cells that could have contaminated adjacent tissue beyond the rectum to reduce the risk of recurrence after surgery,” Dr. Kim said.

“Cancer was never going to beat me,” Paul said.

Six weeks after radiation was complete, Paul had surgery. Eighteen inches of his colon, the tumor, and as many as 20 lymph nodes were removed in that operation. Five of the lymph nodes contained cancer cells. Paul spent two days at University of Washington Medical Center and walked every day after that. He took seven weeks off of work to recover. 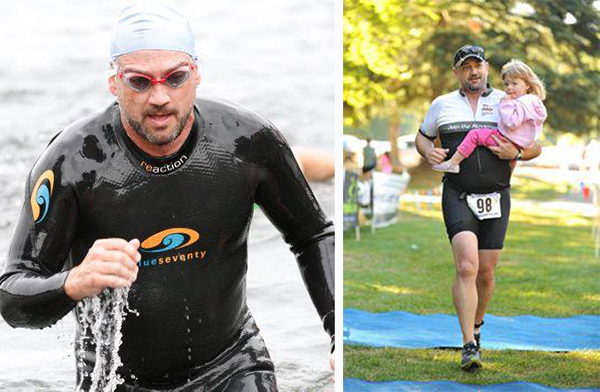 “I did everything I could to be ‘normal’ again after surgery,” Paul said. Anxious to get back to his routine, he gutted out a triathlon at seven weeks. “It was an amazingly cathartic experience, even doing it after just starting chemotherapy. What mattered to me was that I was a fighter and a survivor!”

Paul went back to work, all the while receiving chemotherapy treatment at SCCA and with a portable chemotherapy pump device. “I tried to keep a normal life for my daughter, Natalie,” he said. He and his wife, Laurel, traded off on family duties, sharing the load for drop-offs and pick-ups at school, and for bath and bed times. “By keeping to the routine, I felt like I was putting cancer at bay.

In retrospect, Paul felt better while receiving chemotherapy than he had before he was diagnosed. “In the year before I found out I had cancer, I took a nap every chance I had when my daughter would sleep, and I always made a point to have a bathroom nearby because of my unpredictable GI system.”

Now, despite neuropathy in his feet (he’s lost some feeling) and in his hands (he’s had to change his signature), Paul is on a regular diet and back to his regular life. Though he is “petrified” that he is going to eventually die of cancer, he’s back to training and looking forward to the next race, including an Ironman in Canada just six months after finishing his chemotherapy in summer 2014.

“I want people to know that there is life after being diagnosed with cancer—a wonderful one. I want to make a difference for people and made an effort to be very public about my diagnosis. As a result, friends have gotten colonoscopies. At my age, if I had been more direct with my primary care physician about my symptoms and had a colonoscopy earlier, it’s likely they could have removed polyps earlier [possibly before the polyps became cancerous]. My last year could have been very different.”