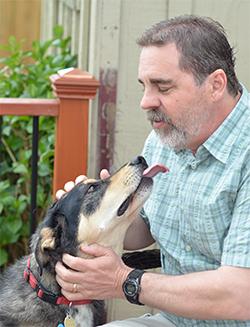 Tony Sharp was 49 years old in 2009 when his back first started giving him trouble. He was a carpenter, so that sort of went with his occupation. He treated his pain with anti-inflammatory medications, but by 2010, it was pretty bad, and one day Tony noticed blood in his stool. His doctor sent him for a colonoscopy.

“My mother had had colon cancer in 2007. I should have had a colonoscopy earlier [due to my family history],” Tony said. But because of a change in his job, he didn’t have insurance, which made getting a routine screening colonoscopy difficult.

Tony’s colonoscopy revealed that he had rectal cancer. He was just about to start school for architectural graphics, but he diverted those energies into getting treatment: six weeks of daily radiation and oral chemotherapy with capecitabine (Xeloda), followed by surgery in October at his local hospital to remove his tumor and give him a temporary ostomy (an opening in his abdomen where waste could leave his intestine to be collected in a bag attached on the outside, letting his lower bowel heal from the operation).

His hospital experience was difficult, and while recovering in the hospital, Tony had two pulmonary embolisms (blockage s in a main artery of his lung from blood clots that had traveled through his bloodstream).

Finally out of the hospital in November, Tony was able to start chemotherapy again, and he began a six-month regimen of FOLFOX, a combination of leucovorin calcium (folinic acid, Wellcovorin), fluorouracil (5-FU), and oxaliplatin (Eloxatin). He also started school in January 2011.

“It was tough,” Tony said, getting chemotherapy, having neuropathy from the chemotherapy along with the cold of the winter weather, and attending school. “But if it hadn’t been for school—[school] helped keep me focused on something other than treatment. I enjoyed what I was doing, but I worried that I wouldn’t be able to learn anything,” he said.

With the support and care of his wife, Suzanne, Tony made it through the winter and the spring. But in May he had another pulmonary embolism. “I tried to sleep, but I was having really bad pain in my upper middle back. I couldn’t breathe,” Tony said. “I went to the emergency room and was in the hospital for seven days.”

At the end of August, Tony had the temporary ostomy removed and was in the hospital for about eight days as his digestive system tried to get back online again. He returned to the hospital a few days later with a leak in his bowels. After another five days as an inpatient he was feeling good and was ready to enter school for the fall quarter.

Tony had nearly two seasons of feeling good. He finished school in December 2011 and enjoyed the holidays with his family. But in January and February 2012, he began to feel poorly. His back, which seemed to be an indicator of trouble for him, began to hurt again. His oncologist had told him to come back for a checkup in a year, which wouldn’t be until June, so Tony wasn’t worried. Back pain is a common side effect of rectal cancer treatment. He had a lot of scar tissue, which could cause pain as well.

In June 2012, Tony went back to see his oncologist for his yearly checkup and had a magnetic resonance imaging (MRI) scan that found a couple of tumors on Tony’s liver. “We were devastated,” Tony said.

At the end of the month, he had a liver biopsy that revealed the rectal cancer had metastasized. “I was diagnosed with stage IV cancer. I asked about my odds, and the doctor said this was pretty much going to take me out. My wife said we would not be returning to a place that gave up hope before I even began treatment,” Tony said.

Suzanne went online at that point to do some research and found Seattle Cancer Care Alliance (SCCA). She read about the Liver Tumor Clinic, survival rates for SCCA patients, and SCCA’s relationship with UW Medicine.

Two days later, Tony and Suzanne had an appointment with William P. Harris, MD, assistant professor in the Division of Oncology at the University of Washington School of Medicine. “SCCA was big compared to where I’d been before,” Tony said. “But it gave me a feeling of confidence and peace. Cancer is their thing.”

Tony and Suzanne liked Dr. Harris. He gave them hope. “He was serious but caring and compassionate. There wasn’t a sense that this was going to kill me,” Tony said. “All of the doctors we saw at SCCA said the same thing: ‘We’ll take care of the cancer. You take care of your life.’ And they came up with a plan.”

Simultaneous Surgeries for Cancer and Metastasis

While completing his last quarter of school, Tony had four-and-a-half months of FOLFIRI chemotherapy, a combination of leucovorin, fluorouracil, and irinotecan (Camptosar), under the care of Dr. Harris with excellent response, followed by surgery.

At his first visit with Dr. Harris, a positron emission tomography (PET) scan revealed something suspicious behind Tony’s original surgery site. “This finding was missed by my original oncologist,” Tony said. “I was convinced there wasn’t any cancer at the original site, but the doctors weren’t.” So he had an ultrasound, a colonoscopy, and a biopsy of that area. Though the results were not definitive, Tony’s team remained concerned that cancer had recurred in his rectum. So he underwent simultaneous surgeries on March 14, 2013, with James O. Park, MD, associate professor of hepatobiliary and pancreatic surgical oncology at the UW School of Medicine, removing his liver tumors and Alessandro Fichera, MD, professor in the Department of Surgery at the UW School of Medicine, removing his rectum and part of his colon. He also received a permanent colostomy.

“The rectal re-operation following prior radiation and surgery in and of itself is extraordinarily challenging,” said Dr. Park. “After several thoughtful discussions with Drs. Harris, Fichera, and myself, the patient underwent a safe and uncomplicated operation by Dr. Fichera, due to his expertise.”

Combining the removal of the liver tumors and the removal of the rectum and colon into a single operation benefitted Tony because he didn’t have to undergo two separate procedures. Additionally, Matthew P. Sweet, MD, assistant professor in the Department of Surgery at the UW School of Medicine, placed a retrievable inferior vena cava filter at the time of the operation “to prevent large pulmonary embolisms from killing Tony during the post-operative period where he cannot be anti-coagulated,” or given medicine to prevent blood clots, Dr. Park said. This is yet another example of the expertise available through UW Medicine and SCCA.

Tony was in the hospital for only a week. “The ostomy nurses were great, as was the entire staff at UW Medical Center.”

Tony’s back pain is gone, and things are looking considerably brighter for him. “Dr. Park got good margins around the tumors,” Tony says. “Dr. Harris was ecstatic and is very encouraged that I have a good chance at a future. My prognosis is better than 50/50 now.” Tony graduated in June 2013 with a 3.7 grade point average—not bad for a guy on chemotherapy most of the time he was in school.

With his new degree, Tony is looking for a new job. He is making plans for a future that looks hopeful and bright. Tony has changed his eating habits, works out, goes fishing, and walks an hour a day with his dog Buster and his wife.