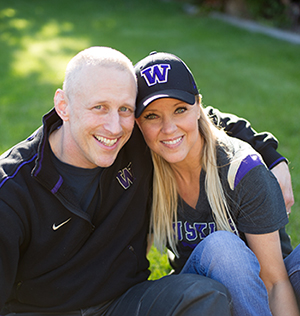 Martin Doggett and his wife

“I was always pretty healthy. I’d had some irregular bowel habits—that was it. I went in to see a gastroenterologist and he scheduled a colonoscopy, just as a precaution. I didn’t think much of it. The doctor said it was probably just constipation. Much to his surprise, he found a tumor in the sigmoid portion of my colon,” Marty said.

On Dec. 21, the same day as his colonoscopy, Marty received a diagnosis of colorectal cancer.

Colorectal cancer originates in the large intestine or the rectum. Small growths called polyps occasionally grow in the lining of the large intestine. Usually they are benign, but sometimes as they grow, they become cancerous. During a colonoscopy, a doctor views the entire colon by inserting a video camera attached to a flexible tube into the rectum. They can remove polyps before they become cancerous or biopsy suspicious growths during the procedure.

Overwhelmed by the cancer diagnosis

“We were wondering what to do, and my parents were trying to comfort us. My dad said, ‘Why don’t you call Dr. Pellegrini?’” Dawnee said.

In July 2012, Dawnee was desperate to find a surgeon who could repair an elective surgical procedure that had gone wrong, leaving her unable to eat and in severe pain. After searching for months, she found only one surgeon who was willing to attempt to reverse the surgery: Carlos Pellegrini, MD, UW Physician and chair of the University of Washington School of Medicine’s Surgery Department.

Dawnee traveled from the Tri-Cities to have surgery at the University of Washington Medical Center (UWMC).

“The UW Medicine team was phenomenal. I was in the hospital for 30 days. I can’t tell you how much I appreciated the personal care I got from Dr. Pellegrini. I was in great hands,” Dawnee said. “Thirty days after walking in, I walked out and have been fine ever since.”

Six months later, Dawnee’s parents insisted that if anyone would know how to handle Marty’s cancer diagnosis, it was Dr. Pellegrini.

“I said, ‘He’s the head of surgery—he’s not going to call me back.’ Well, he called me back within half an hour. Dr. Pellegrini said, ‘I have the perfect doctor for you,’” Dawnee recalled.

His name was Dr. Alessandro Fichera, a board certified UW Medicine colorectal surgeon who practices with Dr. Pellegrini at UWMC and at Seattle Cancer Care Alliance (SCCA).

SCCA is a non-profit partnership between UW Medicine, Fred Hutchinson Cancer Research Center, and Seattle Children's. Together, the three entities provide state-of-the-art cancer screening and diagnosis, as well as world-class cancer treatment and patient care at the only National Cancer Institute-designated comprehensive cancer center in the Northwest. Inpatient care, including surgery, is provided by UW Physicians and medical staff at UWMC. Outpatient care is provided by UW Medicine oncologists who practice at the SCCA outpatient clinic in the South Lake Union neighborhood.

“I got a call from Dr. Pellegrini right before the holidays. He said the husband of one of his patients had been diagnosed with colon cancer,” Dr. Fichera said. “They were devastated by this. Dr. Pellegrini asked me to get Marty in as soon as possible.”

“Dr. Fichera called me at 8:30 that evening. He asked me to read him the medical report. He said that he’d get me into surgery,” Marty said.

The next day, Dr. Pellegrini called Dawnee to make sure she and Marty were doing OK.

“He said, ‘Marty’s going to be fine. Dr. Fichera does this kind of surgery every single day,’” Dawnee said.

“When he came in, he looked OK. He was still constipated, but he was managing it. The only thing unusual about Marty’s case was his age. He is relatively young to be diagnosed with colon cancer—just 49 years old. You are never too young, unfortunately, to get colon cancer,” Dr. Fichera said.

Colorectal cancer is a common cancer with 150,000 new cases diagnosed per year. The best chance you have to cure the cancer is during the initial operation, Dr. Fichera said.

“Survival rates are significantly better if the right surgery is done by the right surgeon at the right time,” he said. "It’s also very important to have a multidisciplinary team caring for you.”

Marty had surgery—a laparoscopic sigmoid resection—on Jan. 7. He ended up on the same floor of UWMC where Dawnee had recovered from her operation six months earlier.

“The surgery went great,” Marty said. “Afterward, I woke up to see Dr. Fichera standing at the foot of my bed. He told me that he removed the tumor. There were no other signs of cancer in my colon.”

One of his lymph nodes showed signs of malignancy, however, so Marty was scheduled to receive 12 sessions of chemotherapy at SCCA.

“I was amazed by the seamlessness of care going from UWMC to SCCA. You’re scared, you’re confused, but they get you the best person for your case, they handle the paperwork and everything. It’s just been great,” Dawnee said.

“That’s what makes SCCA different. We work together very closely as a team,” Dr. Fichera said.

Marty went home five days after surgery. In March 2013, he began driving from Richland to SCCA every other Friday for chemotherapy. Dr. Fichera said that though Marty’s colorectal cancer was stage III, having spread beyond his colon, his prognosis is good.

“We can’t speak highly enough of UW Medicine and SCCA,” Marty said. “I wouldn’t go anywhere else. Here in Seattle, we’re blessed with some of the best medicine in the country, if not the world. People always talk about bedside manner. But I just wanted the best medical care available and I got it. And the bedside manner was great to boot.”

“We would recommend it to anyone,” Dawnee said.

The couple was so impressed with their UW Physicians that they were inspired to switch their college loyalties.

“We were Cougars, but now we’re Huskies!” Marty joked.

“We had all this Cougar fan stuff—now we have lots of Husky gear!” Dawnee said, laughing.

Once Marty’s chemotherapy is done, they plan to make one more trip across the state to Seattle.

“We talked about going to a Mariner’s game,” Dawnee said.

Or maybe a Huskies game? 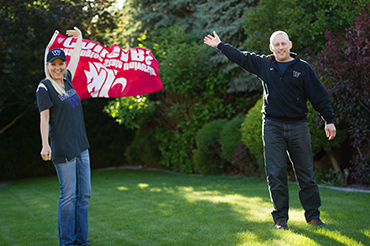