Seemingly at the top of his game in his career and personal life, Steve hadn’t really thought much about being tired. He worked hard and traveled a lot for his work. The occasional blood in his urine gave him pause, but by the time he’d get to a doctor’s office to have it checked out, it would be gone. And so the story went for Steve for over a year, until August 2011 when the fatigue reached a peak—in the mile-high city of Denver no less—while Steve was traveling for work. 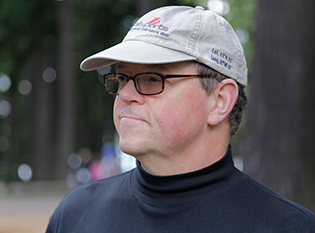 “Sorry I couldn’t call you back right away. We were scuba diving in the Cayman Islands and then did some hiking and saw some theater in the Berkshires before heading home.”

This is not exactly what you’d expect to hear from a man diagnosed with and treated for stage II muscle-invasive bladder cancer. But two years after his diagnosis, Steve Baker is back to living his life as if he never had cancer.

“Twenty-two months ago, I could not have imagined I would be saying those words after having cystoscopy to remove my bladder and prostate and the constructive surgery to create the neobladder and my ‘new normal’ that would define the rest of my days,” Steve said.

How It All Began

Seemingly at the top of his game in his career and personal life, Steve hadn’t really thought much about being tired. He worked hard and traveled a lot for his work. The occasional blood in his urine gave him pause, but by the time he’d get to a doctor’s office to have it checked out, it would be gone. And so the story went for Steve for over a year, until August 2011 when the fatigue reached a peak—in the mile-high city of Denver no less—while Steve was traveling for work.

“The fatigue was awful,” Steve said. “By the time I got home I couldn’t even walk the dog.”

Steve and his wife, Beata, went to see a doctor near their home. Then they went to a critical care clinic. “We kind of thought he might just have walking pneumonia,” Beata said. The doctors at the clinic drew blood and ran tests. They gave him a prescription for antibiotics, just in case it was pneumonia, and told him to head over to the emergency room (ER).

“What they didn’t tell us was that it was urgent that we go to the ER right then,” Beata said. “They’d given us a prescription. We thought we had to get that filled and then follow-up at the ER when we got around to it.”

By the time they arrived home from the pharmacy there were several messages on their answering machine. It was the emergency room calling, wondering where they were. Steve’s hematocrit level—a measure of the volume of blood made up of red blood cells—was very low. He and Beata went to the ER right then, with a new feeling of apprehension.

“They wouldn’t let me walk around in the ER,” Steve recalls. “I was put into a wheelchair and taken for X-rays and a CT scan.”

Steve said the doctors in the ER suspected his heart or lungs were the culprit behind his fatigue. But the CT scan showed a large mass in his bladder. So he underwent a special test to look inside his bladder with a scope, called a cystoscopy or cystourethroscopy.

“I spoke to several doctors who weren’t concerned,” Steve said, “though one doctor thought I probably had cancer. When we got the news, we had to stop and rewind.”

Steve was diagnosed with stage II muscle-invasive bladder cancer. “The doctor told me I’d have to have my bladder removed, but my first concern was scheduling my surgery so I wouldn’t be out of work,” said Steve, who is self-employed. “Could we do this in December?” he asked.

Steve’s doctor told Steve that he would likely die from his cancer if he didn’t take care of it right away. “That brought home the seriousness of this diagnosis for me,” Steve said. In fact, he said it really sunk in about three days later: latent shock.

“At 53 years old, I am not the typical older cancer patient,” Steve said. As with most cancers, there is no definitive cause of bladder cancer. Research has found many links between smoking, environmental conditions, heredity, diet, and other factors that increase a person’s chance of developing bladder cancer. Steve had none of the known risk factors. He wasn’t a smoker and hadn’t been exposed to harsh chemicals in his line of work. It was just one of those things. Many people haven’t heard of bladder cancer. However, it is the fourth most common cancer in men and the 12th most common in women.

“We asked what our options were for treatment,” Steve said. “My doctor at the time said he was a good surgeon, but I would need a device or a neobladder afterwards, and he recommended I go to the best doctor in the state, Jonathan L. Wright, MD, MS, FACS, at Seattle Cancer Care Alliance (SCCA). There was a radical difference from the hospital I started at and University of Washington Medical Center (UWMC). Before, it was sort of laissez-faire; at SCCA and UWMC, that all changed.”

Dr. Wright, a urologist and surgeon, wanted to treat Steve’s cancer aggressively. “Without treatment, muscle-invasive bladder cancer is fatal,” Dr. Wright said. “However, if we are able to diagnose it before it has spread, our goal is cure. This is best accomplished by a combination of neoadjuvant chemotherapy followed by radical cystectomy. The combination of the chemotherapy followed by surgery [to remove the bladder] has better outcomes than surgery alone. As a result, when we see patients with muscle-invasive bladder cancer like Steve had, we approach it as a team and get our medical oncology colleagues involved in the treatment plan.”

“We appreciated Dr. Wright’s being aggressive," Steve said. “I learned more in that first visit with him than at any other visit. He had a plan. He knew exactly what he wanted to do and the timeframe to do it in.”

Under Dr. Mostaghel’s care, Steve received a PICC line, a peripherally inserted central catheter, to give intravenous access for a prolonged period of time. Chemotherapy began. Two days later, Steve began to develop pain, swelling, and nausea. “The chemotherapy nurse at SCCA saw me and knew just by looking at me that I had blood clots,” Steve said.

Steve was admitted to UWMC’s Cardiac Critical Care unit for treatment of his blood clots, quickly turning him from a cancer patient into a cardiac patient. Once the clots were resolved, Steve received the rest of his chemotherapy treatments and then had surgery on December 24. Dr. Wright removed Steve’s bladder and constructed a new bladder, or neobladder, from Steve’s own bowel tissue. A regional leader in minimally invasive robotic bladder cancer surgery, Dr. Wright performed the bladder removal with the da Vinci Surgical System.

Radical cystectomy in men may also include removal of the prostate. In Steve’s case, incidental prostate cancer was detected when his prostate was analyzed after surgery.

“Dr. Wright is more experienced and has a fantastic track record with both removing the bladder and creating the neobladder,” Steve said. “In my case, Dr. Wright performed a ‘textbook’ operation, with no physical constraints. He was able to remove the bladder and prostate in the first half of the operation. The construction and deployment of the neobladder also went very smoothly, getting me out of surgery several hours earlier than expected and avoiding the 24 to 48 hours in the intensive care unit for recovery that we had been told to expect.”

On December 27, the pathology report on 17 lymph nodes came back clear. “That’s when we celebrated Christmas,” Steve said. “The care was fantastic. Dr. Wright came and spent two hours with me on Christmas day. And he has a couple of young kids at home!”

Before bladder cancer, Steve had never been sick. In his mind, dealing with an illness was a simple matter of getting the right treatment, and he assumed that everyone with a particular disease received identical treatment. “We didn’t understand that every patient and every cancer is different,” Steve said. “As we developed a relationship with Dr. Wright and his team, we came to understand that all patients are not the same, nor are the treatments they receive, even if they have the same disease.”

When it came to doing research on the Internet, Steve said, “It’s a mixed blessing, like drinking from a fire hose. SCCA dealt with what I had, not with hypotheticals.”

During the first year after his surgery, Steve attempted to “find the new normal without a bladder,” he said. “Anecdotal evidence was helpful and terrifying. There just isn’t a lot out there about bladder cancer and neobladders.”

Every three months, Steve went in for blood tests and CT scans. At the two-year mark, he moved to six-month check-ups. “I’m on a month-to-month lease for two to five years,” he said.

“I’ve never met a person who said cancer isn’t a life-changing experience. With the chemo, I was reset at a cellular level. I’ve had a very positive experience, but I wouldn’t want to do it again,” Steve said. “I try to look at life differently and try not to fall into old ways. It definitely makes you more compassionate.”

Steve is “delighted and honored” to talk to any patient facing similar procedures, to offer whatever information and reassurance he might be able to provide.

“While every patient is indeed different, and every person and every surgical procedure is unique—a concept that took me nearly two years to fully realize and accept—I am delighted to talk about the events leading up to and following surgery, including bringing the neobladder ‘online,’ what has changed, and what hasn’t since the operation and clean CT scans and check-ups,” Steve said.

Almost 24 months after his diagnosis, Steve and Beata returned from their first post-surgery vacation able to report that, thanks to the care Steve received from his SCCA team, nearly any activity, including scuba diving and mountain hiking, is still possible for him.

“Ultimately, the treatment a person chooses is a very personal decision that only the patient can make; but I could not be happier, nor more thankful, for the results we had and my subsequent ability to get on with virtually all aspects of my life,” Steve said. “I would recommend SCCA to anyone who has access to it. It’s world class. You owe it to yourself to check it out, no matter where you live.”