Richard Braun was 58 when he was diagnosed with prostate cancer. After researching his options for treatment, he chose proton therapy as the best treatment to fit his lifestyle and cure his disease. 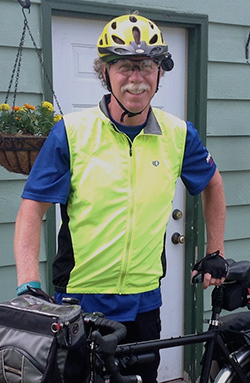 Helping others communicate in a crisis is what Richard Braun is trained to do. An electronic communications technician, Richard provides the technical infrastructure needed for cleaning up oil spills. But when Richard was diagnosed with prostate cancer in 2012, he turned to others for advice on his own health crisis.

“It all started in 2010 when my company started to offer men a free annual PSA [prostate-specific antigen] screening,” he said. “At the first screening, my PSA was at a 1.8, which wasn’t alarming. However, over the course of 24 months, we discovered that it jumped to 10.7 and that I would need to have a biopsy.”

A few weeks after the biopsy, Richard’s doctor, a surgeon, confirmed that Richard had prostate cancer and should begin considering treatment options. The surgeon recommended robot-assisted surgery but also offered to arrange for a second opinion with another doctor so Richard could learn about conventional intensity-modulated radiation therapy and brachytherapy, which involves placing radioactive cancer-killing seeds in the prostate.

Since Richard’s cancer had not spread beyond his prostate, time was on his side. He used this to his advantage, researching all possible options and any side effects associated with the different treatment modalities.

“I told the doctor ‘I’ll get back to you’ and then left to do my own research,” he said. “Knowing I had time to investigate my options, I joined a prostate cancer support group and began talking to men about the treatment they had and any side effects they were experiencing.”

The right treatment for an active lifestyle

Being active and outdoors was an important aspect of Richard’s lifestyle. Also, he was concerned about the risk of incontinence as a side effect of treatment. “I knew there had to be a better solution out there that would work with my lifestyle, not against it,” he said.

After reaching out to a former coworker who had battled prostate cancer, Richard learned for the first time about proton therapy. He was inspired to research this form of treatment further and began reading about protons. Richard contacted more survivors and planned a trip to visit a proton therapy center.

“One of the articles I read during my research mentioned there was a center opening soon in Seattle, and for me that’s when I knew my decision was made. I chose proton therapy,” he said.

SCCA Proton Therapy Center opened in the spring of 2013 on the campus of SCCA UWMC-Northwest, and Richard began his treatment there. Given the center’s location, convenient to his home, he was able to maintain a sense of normalcy during this outpatient treatment and continue to work five days a week. Richard experienced virtually no side effects during treatment. He even decided to surprise everyone at his last proton therapy session by riding his bike more than 20 miles to the treatment center from north Everett, where he lives.

“Life is a journey, and how we choose to live our lives will determine our future,” he said. “As I ended this part of my journey with cancer, I knew I was moving forward to bigger and better things.”

It’s your life, it’s your choice

Despite being a reserved person by nature, Richard is passionate about sharing his story with others. He believes that most men do not want to talk about the health challenges they face and too often just go along with whatever advice they receive first from their doctors.

“I truly believe that doctors are extremely smart and have the best of intentions, but it’s important to be an active participant in your own care,” he said. “Question what you’re being told, get a second opinion, and make sure you’re comfortable with the treatment plan being created. It’s your health, it’s your life, and it’s your choice.”

One of the things Richard appreciated most about the care he received at SCCA Proton Therapy was the sense of community and the opportunities to share created by the staff. From dinner meet-ups off of the hospital campus to afternoon chats in the lobby before his therapy sessions, Richard found immense value in talking to men going through the same treatment. It was comforting to him to know that he was not alone.

“I still find myself returning to the center from time to time to talk with others,” he said. “While my treatment has ended, the survivor community that I am now a part of is just beginning.”