It was Sept. 24, 2011, when it all started and the 6-foot-3-inch teen had been visiting the University of Washington campus because she was a high-school basketball star visiting a program that would later award her a full athletic scholarship. 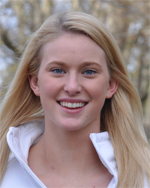 When Katie Collier first heard her own diagnosis she was lying in a hospital bed.

It was Sept. 24, 2011, when it all started and the 6-foot-3-inch teen had been visiting the University of Washington campus because she was a high-school basketball star visiting a program that would later award her a full athletic scholarship.

Her gums began to bleed, which is a symptom that often comes with leukemia. She wound up in an emergency room near her home in Covington, Wash., but eventually came to UW Medical Center, where doctors tested her blood and looked carefully for cells that were not typical.

“You have leukemia,” is what she heard, but the words did not sink in.

“My family was all around me, and I could see on their faces that they were serious and all, but I was just thinking that it was impossible. I was in utter shock,” she said. Her dad, Mark, and mother, Ann, have five children. Katie is the youngest.

What perhaps nobody could foresee is that daughter, Katie, would feel so comfortable taking the elevator to the 5th floor of the SCCA clinic because she had been at her Mom’s side in those same rooms in 2008.

“I never dreaded going in there. People dread it but I never did,” Katie explained, looking back on it. “We chose SCCA because my Mom’s care had been phenomenal.”

Dr. Estey has been a pioneer of new techniques for treating blood cancers, including leukemia. He treated Katie with a combination of all-trans retinoic acid (ATRA) and arsenic trioxide (ATO). ATRA is related to Vitamin A.

This combination of agents came from research that originated in China and Estey loves to tell the complex story of how the original findings were seen with skepticism in the beginning. Now they are one of the standard therapies for APL – and the survival rate has improved to nearly 100 percent, Estey said.

“This teaches the importance of clinical trials,” Estey commented. “Because people did trials, we were able to develop this therapy.”

These two agents are not as harmful to normal cells as some other therapy agents. Katie did not lose her beautiful long hair during the treatment.

ATRA is a pill, and ATO is given intravenously.

During hours when Katie had to be infused with ATO, her sister, Megan, stayed at her side. Megan decided to leave college and come back home weeks before Katie’s diagnosis. Megan also became an assistant coach on Katie’s current high school team at Seattle Christian.

In a moving slide show of photographs, Katie documented 64 different poses from her journey – mostly in the infusion suite on the 5th floor of the SCCA outpatient clinic. There are goofy faces, sister poses, family grins and visiting team shots. There is no photo from a bad day – but she admits there were some of those.

In what most consider an awesome display of determination and grit, Katie did practice and play during the season with her team. Her high-school coach gave a speech about this at an event in Seattle in March. He told the crowd that Katie never complained. He described her playing unselfishly, giving passes to others so they could score, and doing it for her team.

“I don’t think of myself as an inspiration to anyone else,” she said. But once, after a game, an opposing player told her through tears – “I feel privileged to play against you.”

Ann said that Katie is “far tougher than I ever knew she was.”

When she’s out on the court, Katie explained, the rest of the world slips away.

“Being out on the court gives me a sense of normalcy,” she said. The willowy athlete takes her newfound celebrity with grace. She has been the subject of many video reports on television and online. She may face even more of them in her next four years playing Division 1 for the UW team. She was one of only 24 female high-school students selected nationally for the McDonald’s All American team and the first ever UW incoming freshman recruit selected to play in the McDonald’s All-American game.

When she asked Dr. Estey if she could play basketball – he said, “You do what you want.” He said rest is not necessarily the right strategy for all patients, contrary to what people may believe.

Dr. Estey predicts that Katie will be cured by her treatment. She will get regular blood tests to look for changes.

As she emerges from the treatment tunnel, Katie shares her story here in hopes that other patients will find strength. She also plans to give back by volunteering – while she attends college – at the Ronald McDonald House, a Seattle residence for ill children and their families.

“I don’t think of myself as anything special,” she said.  Her mother said – during her own battle with breast cancer that she “did not want it to define her life.” Katie has followed her mother’s example – cancer is part of her story but the cancer does not define her. She is still just an 18-year-old girl taking on the challenges of life one day at a time.