Jessie Quinn is an acute myeloid leukemia (AML) survivor, a mother, wife, scientist—and pioneer. In September 2010, she was the first to participate in a Seattle Cancer Care Alliance (SCCA) clinical study led by Colleen S. Delaney, MD, that is making cord blood transplants a more effective option for adults. 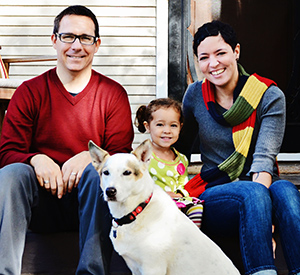 Jessie Quinn and her family

Jessie Quinn is an acute myeloid leukemia (AML) survivor, a mother, wife, scientist—and pioneer. In September 2010, she was the first to participate in a Seattle Cancer Care Alliance (SCCA) clinical study led by Colleen S. Delaney, MD, that is making cord blood transplants a more effective option for adults.

Alternative transplants, including cord blood transplants (transplants of blood saved from umbilical cords and placentas following childbirth), are increasingly becoming an answer for the approximately 35 percent of patients in the U.S. who face having no matches from either a sibling or an unrelated donor. For those patients with a mixed-race or racial minority background, this number is even higher, approaching 70 percent or more who cannot identify an adult volunteer donor.

Cord blood is unique because its immune cells haven’t been educated against foreign invaders like bacteria and viruses. Additionally, the naïve immune system of cord blood means that close HLA tissue-type DNA matching is much less important for cord blood than it is for bone marrow transplants. In fact, most patients who undergo a cord blood transplant receive highly mismatched donors—without increasing their risk of graft-versus-host disease (GVHD).

When Jessie first heard her she’d been diagnosed with AML, “I already knew I was going to have a hard time finding a donor,” she said. Her ancestry is half Caucasian, half African-American. A dozen years earlier, while a college student, she had signed up to be a donor in the National Marrow Donor Program after learning that African-American and biracial donors are underrepresented in the registry.

For Jessie, what began as a life-changing setback became a story of courage, thoughtful resolve, and ultimately, a return to good health.

Like many leukemia patients, Jessie’s experience started with distressing symptoms. In early February 2010, “the vessels on the back of my retina (in one eye) would rupture. I’d get these bubbles—you can’t see very well, it’s like looking through a glass of water.” She was diagnosed with central serous retinopathy (CSR) by her eye doctor. “What was inexplicable to everyone was that two weeks later it started up in my second eye, which was an extremely rare presentation of CSR,” she says. The symptoms would resolve and then start up again.

But what triggered the blood test that led to Jessie’s AML diagnosis was the crippling rectal pain that sent her to the emergency room about a month later. Jessie and her family live in Sacramento, and she was seen at University of California Davis Medical Center. “They diagnosed me fairly quickly,” she recalled. “And sent me immediately upstairs to the oncology floor.” Jessie stayed there for the next month, for her entire induction chemotherapy.

At the time, Jessie was 35; her daughter Luna was just a year and a half old. Jessie’s first treatment involved five days of high-dose chemotherapy, followed by three weeks of monitoring while her blood counts dropped and then rose back to normal levels. Jessie recalls her feelings at that time: “Having a young daughter was the really tough part of getting this diagnosis. Worrying about the diagnosis of AML was one thing—but the worry about how it would affect my ability to be the mom I wanted to be was almost bigger.”

Jessie’s induction chemotherapy was supposed to put the AML into remission as a temporary measure while a search for a long-term solution was launched. Her doctors told her that she’d need a transplant to survive. Some of Jessie’s cytogenetics indicated a poor or uncertain prognosis. Additionally, she had what’s called central nervous system involvement. “Typically,” she said, “leukemic cells are in the bloodstream. Occasionally, like in my case, they get into the cerebral spinal fluid. It’s rare in AML to have that kind of involvement. Basically, my leukemia was not going to respond well to chemotherapy alone.”

When the National Marrow Donor Program searched for a potential donor in 2010, her name was the only perfect match. “I could never decide if that was actually funny or not,” she said.

After a five-month search, no viable donor was found. During this time, Jessie went through four more cycles of chemotherapy to keep the AML in remission. At that point, “We knew that we had to try another type of transplant. I had read a lot about cord blood transplants.” Ultimately, Jessie decided on SCCA. “I had already heard quite a bit about Seattle and SCCA—that they were leaders of the transplant field in general. So I felt a lot more comfortable going up there.”

Being Part of the Experiment

Jessie works as an ecologist for a consulting firm that plans, designs, and restores the ecology of natural and urban environments. As a scientist, she devoured scientific literature about stem cell transplantation approaches. “As soon as I learned anything, I would research the whole thing. I wouldn’t recommend that level of research to everyone, but I have that ability to look at things objectively from a scientist’s perspective.”

Jessie arranged to meet with Dr. Delaney during her initial visit to SCCA. “We talked about how she was building on her other research into cord blood stem cells, and I thought her ideas were brilliant and interesting,” Jessie said. “I’d never had an opportunity to be ‘part of the experiment’ and there was something about participating in this that felt right to me.”

Jessie’s transplant was performed in September 2010. SCCA physicians routinely use a combination of two cord blood units in performing this transplant in adults to extend the number of stem cells; Dr. Delaney’s study added a third, “manipulated” unit composed of cord blood stem cells that had been previously expanded and then frozen for patients without the need for HLA matching. Performing the expansions ahead of time allowed Dr. Delaney and colleagues to generate a “bank” of expanded cord blood cells that are immediately available for patients. The goal was to infuse these cells, in addition to the primary donors’ cells, in order to overcome the delay in white blood cell recovery.

Jessie remained hospitalized for about 30 days post-transplant. “It was a difficult, long, but fairly uneventful recovery, which is really one of the best things you can hope for. I loved my doctors at SCCA,” she said. “For the amazing things they do, the SCCA doctors I worked with have absolutely no pretenses at all—they’re just very approachable, caring people. I think it makes a big difference in your treatment, and in your recovery, too.”

Jessie moved back to Sacramento with her husband and daughter in early January 2011. She felt very fatigued for the first year of her recovery. “I didn’t know you could be that tired,” she said. “I was in bed for... it felt like weeks on end. Around March, about six months after transplant, I started working 10 hours a week editing reports for my company. That was good. I needed to exercise my brain and I was still really tired, but it worked. I increased my hours slowly and by the following September, after I went for my one-year checkup, I changed some of my medications and I felt significantly better after that.”

Jessie’s one continuing artifact of her transplant was contending with GVHD. “It’s something I feel silly whining about when I’m so lucky to still be alive,” she said. “I just got these rashes—especially when  exposed to the sun.” Having worked outside for most of her career, limiting outside activities was difficult. Jessie took medications for GVHD, and daily sunscreen became a habit. Shes had successful check-ups at SCCA ever since.

She now works four days a week. “I haven’t started working full time yet,” she says, “because I feel like I want to make up time with my daughter”—time she feels she lost during her illness.

“In most places, donating cord blood is still a fairly difficult process right now,” Jessie said. “If you want to donate cord blood to a public bank, you usually have to arrange it on your own and have your doctor agree to learn how to do it. If more people knew about public cord blood donation and had their eye out for it, that would be great. Then maybe the process would be streamlined and be more widely available. When there are more and more cords in the banks, everyone who needs it can get this kind of transplant.”

The message Jessie wants to give people who aren’t likely to find a perfect donor match is to never give up. “There are many other types of transplants besides matched adult donors that are having very good results. You should keep asking questions—asking multiple doctors about new techniques and clinical trials. If someone says they’re out of options, that may not actually be the case at all.” Jessie is living proof of that.