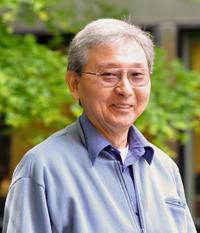 In 1995, Franks's mother passed away after being sick for a couple of weeks. Frank learned that his mother died of pancreas cancer at the University of Washington Medical Center. Later Frank met Dr. Teresa Brentnall, a gastroenterologist who is leading the research in pancreas cancer in the UWMC Digestive Disease Department.

“Dr. Brentnall asked me about my family tree. We have cancer all over the place and lots of pancreatic cancer,” Frank says. “She told me that we should have EUS testing — the whole family. And we did that annually.”

EUS is a procedure called an Endoscopic Ultrasound. “It is a very specialized study performed by experienced gastroenterologists to look at the pancreas from inside the body through the wall of the stomach,” says SCCA medical oncologist Dr. Sam Whiting. “In the right hands, EUS is very sensitive for detecting abnormalities in the pancreas.”

“Frank's story is remarkable because he was normally getting an EUS once per year,” Dr. Whiting says.  In December 2005, Frank learned that he had pancreas cancer.

“The EUS that found his cancer was performed two months early, only because his doctor was leaving and they decided ‘better early than late,’" Dr. Whiting says. “The cancer had gone from invisible to over three centimeters and lymph node positive in just 10 months.”

Frank could hardly believe it when he was diagnosed. “I was ready to go on a work trip when I found out. I felt fine! I couldn’t believe it. One-quarter of my pancreas had cancer.”

Dr. Brentnall got a team together that consisted of Dr. David Byrd, University of Washington professor of Surgery, and Dr. Whiting, UW assistant professor of Medical Oncology.

In January, Frank began treatment with Dr. Whiting instead of surgery. Every day for three months, through a port and by pill, Frank received his treatment of gemcitabine (G), docetaxel (T) and capecitabine (X) (GTX) and chemo+radiation. “I lost all my hair on one day. It was all over the floor!” Frank says.

Then Frank was able to then have surgery in June.

“When my white blood cell count went down, I felt scared. But I did OK through chemotherapy and radiation,” Frank says. Surgery was another story.

Dr. Byrd removed about one-quarter of Frank’s pancreas and he was in the hospital for nearly three weeks. For about six months afterward, Frank had to use crutches to help him walk and had a feeding tube to eat. He needed help walking and using the bathroom.

“Dr. Brentnall came to visit me in the hospital,” Franks says. “The team I had was amazing.”

Although Frank’s recovery was hard, he lived by three important things his father, who had lived in the Minidoka War Relocation Center after World War II, taught him three keys to a good life: respect, honor, and never giving up.

In 2010, Dr. Whiting noticed that Frank’s PSA levels were increasing. A biopsy revealed cancer in his prostate.

Dr. William Ellis, UW professor of urology, took care of Frank’s cancer this time. Fortunately he required no additional treatment after that.

“When you get cancer, nothing else matters,” Frank says. Which lead him to quit his job after 42 years as a lead engineer at the Boeing Company.

Frank says his children, now in their thirties, are nervous about the family’s high risk for pancreas cancer. Dr. Whiting has encouraged them to have EUS testing after they turn 40 so that if pancreas cancer does show up, they can catch it as early as possible.

“EUS is at least one of the tests that his children will definitely need to get to screen for pancreas cancer,” Dr. Whiting says. “Unfortunately, they have a very high risk of getting cancer themselves.”

Frank is 74 years old (2011) and feeling good. He exercises daily, participating in Tai Chi for balance and pickle ball (indoor tennis), where he regularly gets “beat up by the 80 year-old ladies,” he says.